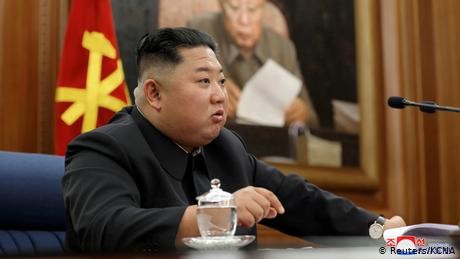 North Korean leader Kim Jong Un on Saturday convened a high-profile ruling party summit in Pyongyang ahead of a year-end deadline for Washington to shift its stance on North Korea's nuclear program.

North Korea's state news agency KCNA said that "national defense" was among the main topics in the meeting.

The ruling Workers' Party of Korea will also "discuss important matters arising... in the building of the state and national defense," KCNA added.

The meeting, which will continue for several days, comes after widespread speculation that the communist country is preparing to test an intercontinental ballistic missile (ICBM) as a "Christmas gift" for the United States.

US-North Korea talks on the peninsula's denuclearization have been deadlocked since Kim and US President Donald Trump met in Vietnam in February this year.

The two sides disagree on the steps towards the easing of tensions, with Kim demanding the Trump administration lift sanctions against his country in exchange for his moratorium on ICBMs.

Earlier this month, Pyongyang's vice minister of foreign affairs conveyed the December 31 deadline for the US to offer concessions.

Read more: North Korea breaks off nuclear talks with US

North Korea is under heavy US and UN sanctions over its controversial nuclear program. Russia and China – North Korea's main ally – also favor the lifting of sanctions to de-escalate tensions.

Although, there hasn't been an ICBM launch since the start of talks, North Korea has fired multiple short-range missiles into the sea in the past few months.