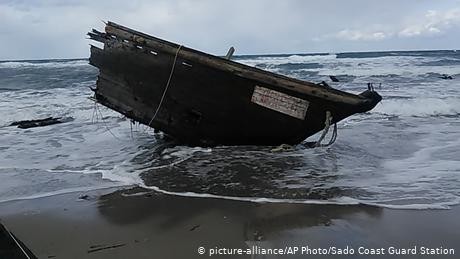 The Japanese Coast Guard on Sunday said a boat believed to have come from North Korea was discovered on Japan's Sado Island and contained several decomposing bodies.

Authorities said there were seven bodies found on the boat. However, that figure could change since the coast guard had specifically discovered three bodies with heads, two bodies without heads and two heads without bodies. It is unclear whether the heads belong to the bodies.

"Five of the bodies were identified as men but the remaining two could not be identified," an official told the AFP news agency. "There have been similar cases, but this was the first discovery of bodies in such a wrecked boat on this island this year."

Letters and numbers in the Korean alphabet were painted on the side of the boat, but there were no other indications of its origin.

According to experts, such "ghost boats," as they are called by Japanese media, are likely the result of North Korean fishermen traveling further out to sea in an attempt to make bigger catches and satisfy tougher government quotas.

The boats are generally old and ill-equipped to deal with such long ventures out into the Sea of Japan.

More than 150 vessels suspected to be of North Korean origin have washed up on Japanese shores this year, according to local media.

Earlier this year, dozens of North Korean fishermen were rescued after their vessel collided with a Japanese patrol vessel, effectively sinking their ship.