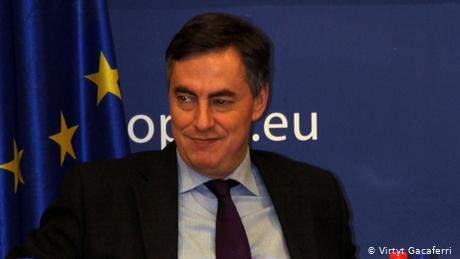 McAllister, asked by the Hanover-based RND news portal Sunday if Scotland could "very quickly" acquire EU membership, replied that such accession would be "presumably shorter" than the bloc's procedure for outside candidates.

"Scottish institutions are already asking me whether I can be their contact person in Brussels after Brexit," said McAllister, adding that Scottish universities were keen to retain EU research and academic incentives and that he studied the Scottish media "daily."

A post-Brexit Scottish accession bid was, however, "currently a theoretical question," said McAllister who has German and British nationalities, is a member of Chancellor Angela Merkel's Christian Democrats (CDU) and chairs the European Parliament's committee on Foreign Affairs.

The "first prerequisite," he said, was whether Edinburgh under First Minister Nicola Sturgeon prevailed with a second independence referendum in 2020. Scots voted in a 2016 referendum to remain in the EU after they had rejected independence by 55% to 45% in 2014.

McAllister, referring on Sunday to British Prime Minister Boris Johnson's post-election drive to take the United Kingdom out of the EU — despite Scottish objections — by January 31 said the British premier "stood before enormous challenges."

"A new round is this battle has begun" in Britain's Brexit drama, McAllister told RND (Redaktionsnetzwerk Deutschland [Editorial Network Germany]).

McAllister grew up in Cold War West Berlin where his father, originally from Glasgow, was a British forces civilian official and his mother as a music teacher.

Asked if Britain, post-Brexit on January 31 would rearrange its future relations with the EU by the end of 2020, McAllister described the time-frame as "extremely ambitious."

"A detailed free trade agreement is in any case not realizable in so few months," he said, speculating that London might seek a transitional phase of "up to two years."

"The UK may be leaving the EU, but remains linked to us in many ways," he added.

McAllister governed Germany's northern state of Lower Saxony as premier from 2010 until 2013, became an EU parliamentarian in 2014 and its foreign affairs committee chairman in 2017.

The 48-year-old member of German Christian Democrat is also one of 10 vice presidents of the conservative European People's Party (EPP).

The welcoming overture to Scotland came after former British Prime Minister Theresa May asserted during Westminster debate on December 19 that an independent Scotland would not be allowed to be part of the European Union.

Currently waiting to join the EU are four Balkan nations — Serbia, Montenegro, North Macedonia, and Albania — but their accession bids had been slowed down by EU focus on Brexit and lack of domestic reforms as perceived by the European Commission.

At the EU's Brussels summit in October, France, the Netherlands and Denmark sought to delay such accession bids.