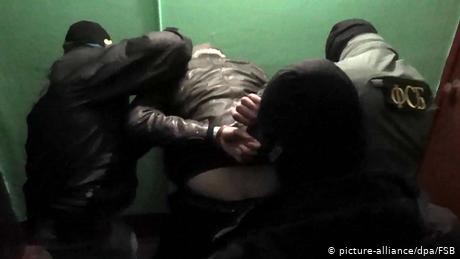 A suspected terrorist who was arrested for planning a New Year's attack in St. Petersburg had pledged allegiance to Islamic State, Russia's state secret service (FSB) said on Monday.

The suspect was detained on Friday together with another man after US security services tipped-off the Russian authorities. The two men were allegedly planning to carry out an attack in crowded locations around New Year.

A video was released by the FSB, showing the arrest of two Slavic-looking men and a raid on their apartment where munitions, knives, electrical cables and black clothing were uncovered.

In another video released by the FSB to Russian news agencies, one of the suspects is shown with a masked face, pledging allegiance to Islamic State in Arabic. Russian officials have provided no other details on the alleged attack plan.

The Kremlin said that Russian President Vladimir Putin passed on his thanks to US President Donald Trump for sharing the intelligence that helped stop the attack, during a telephone call on Sunday.