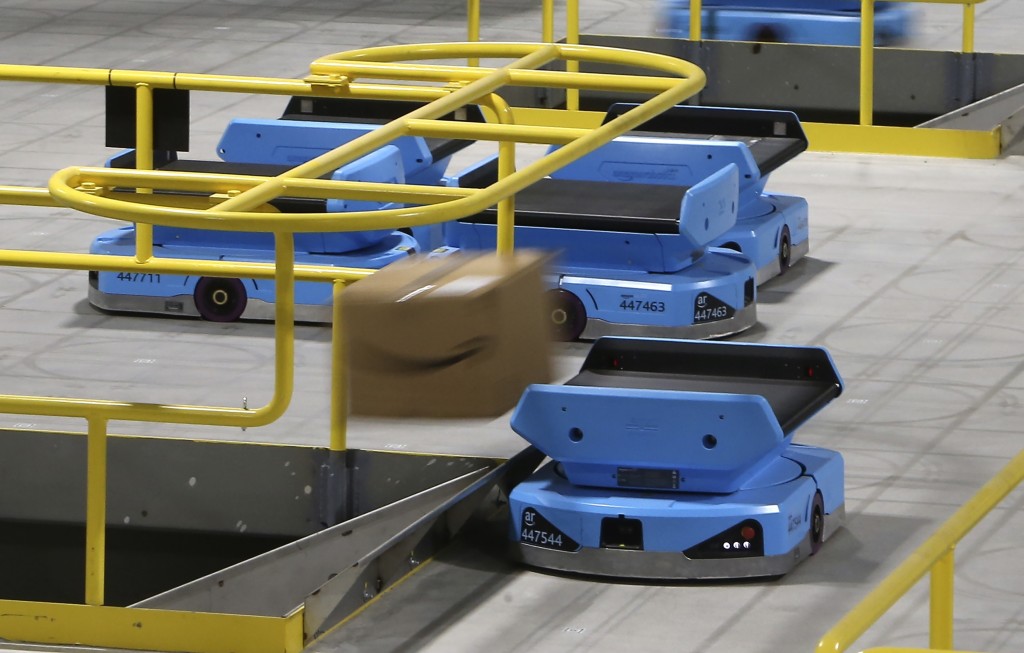 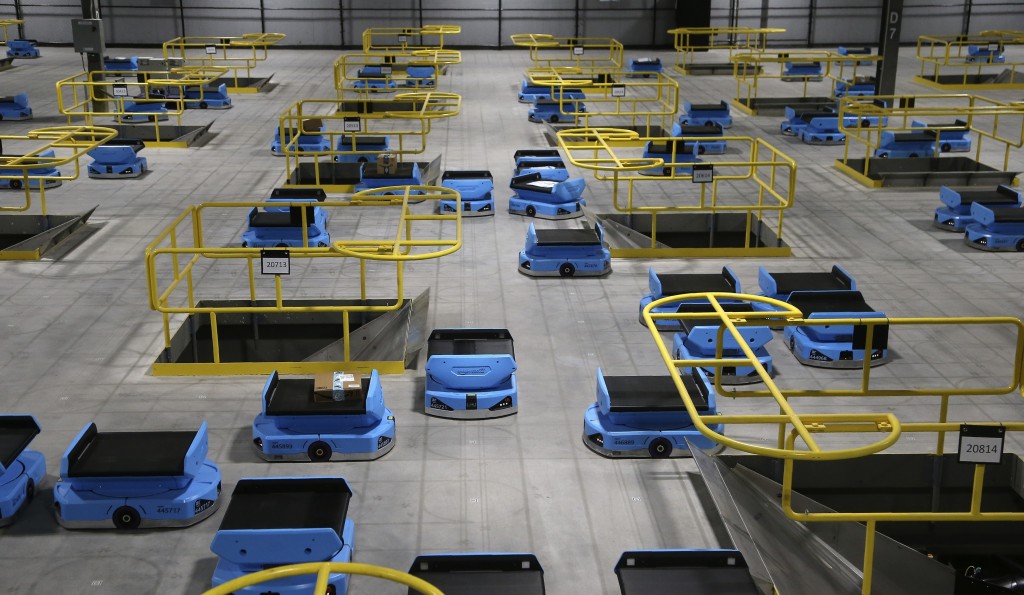 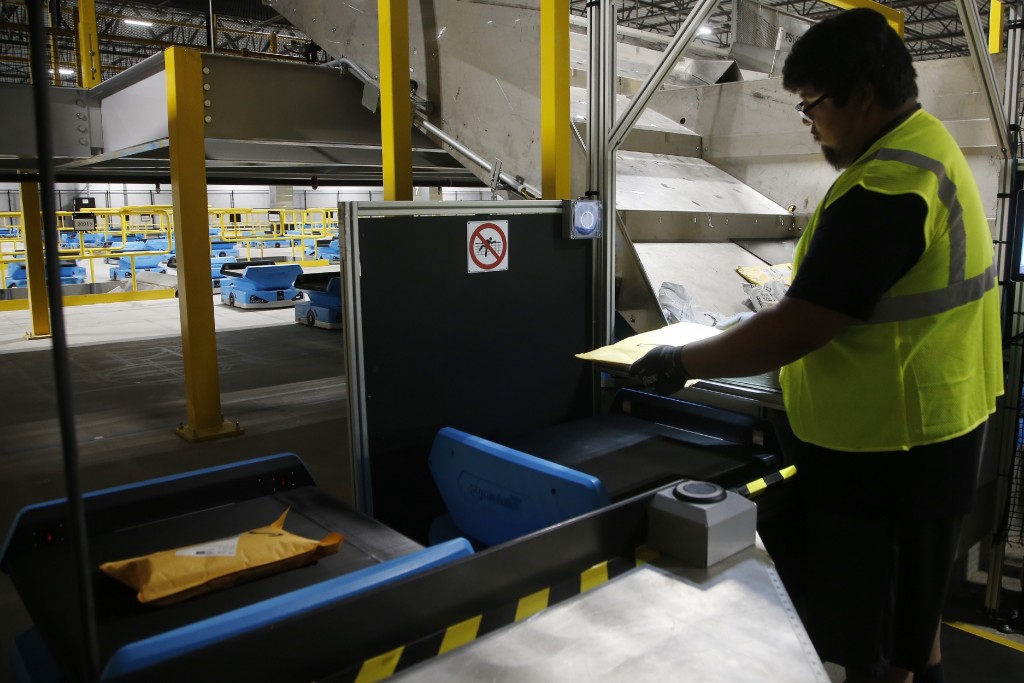 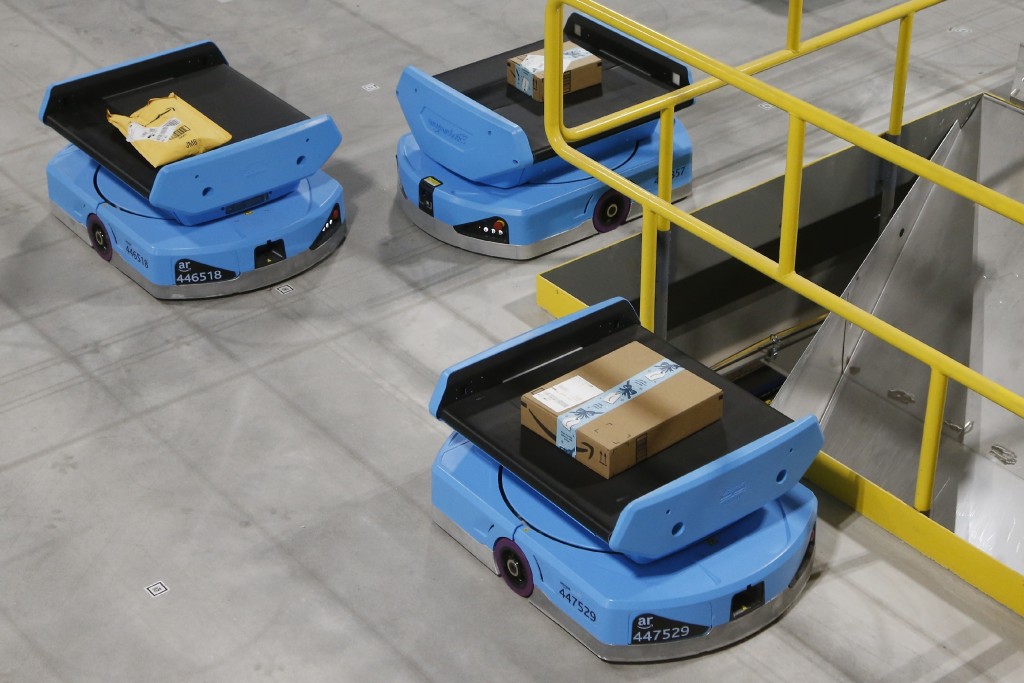 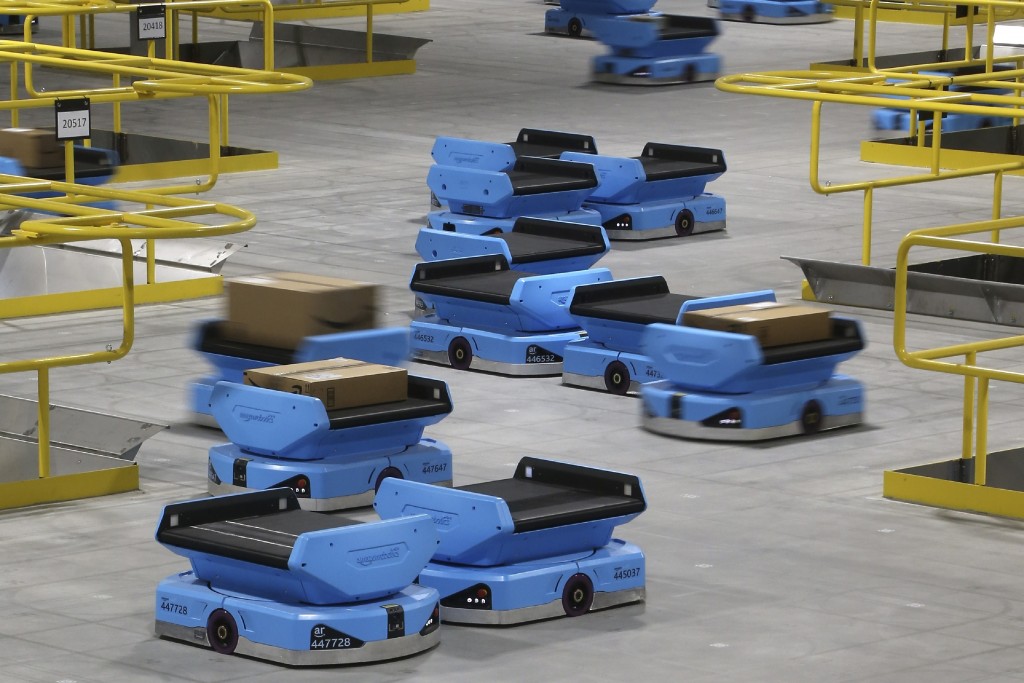 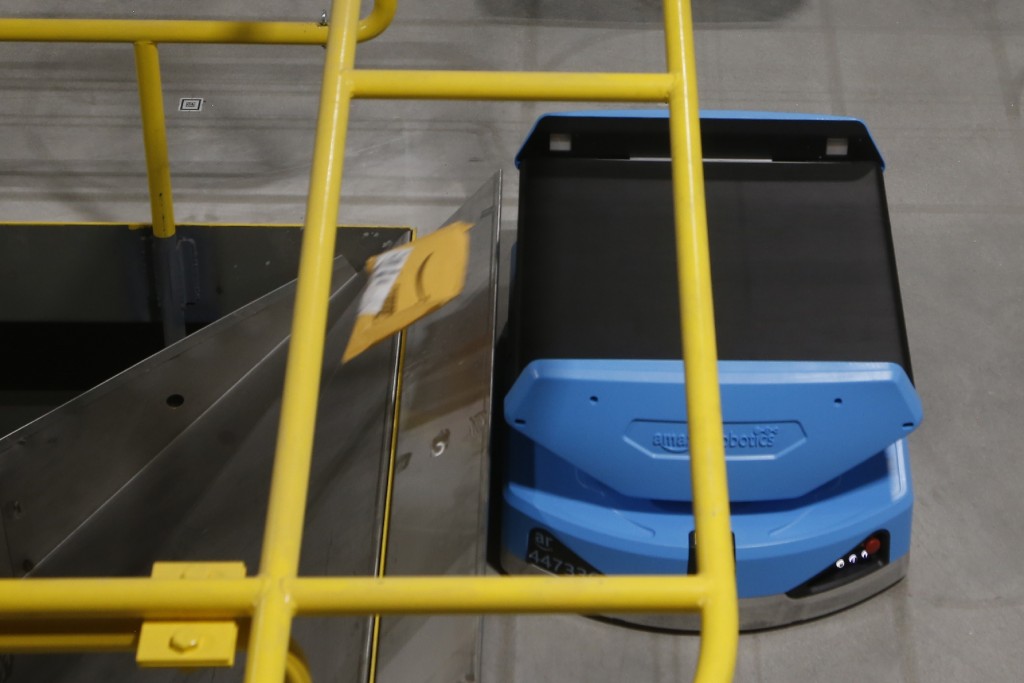 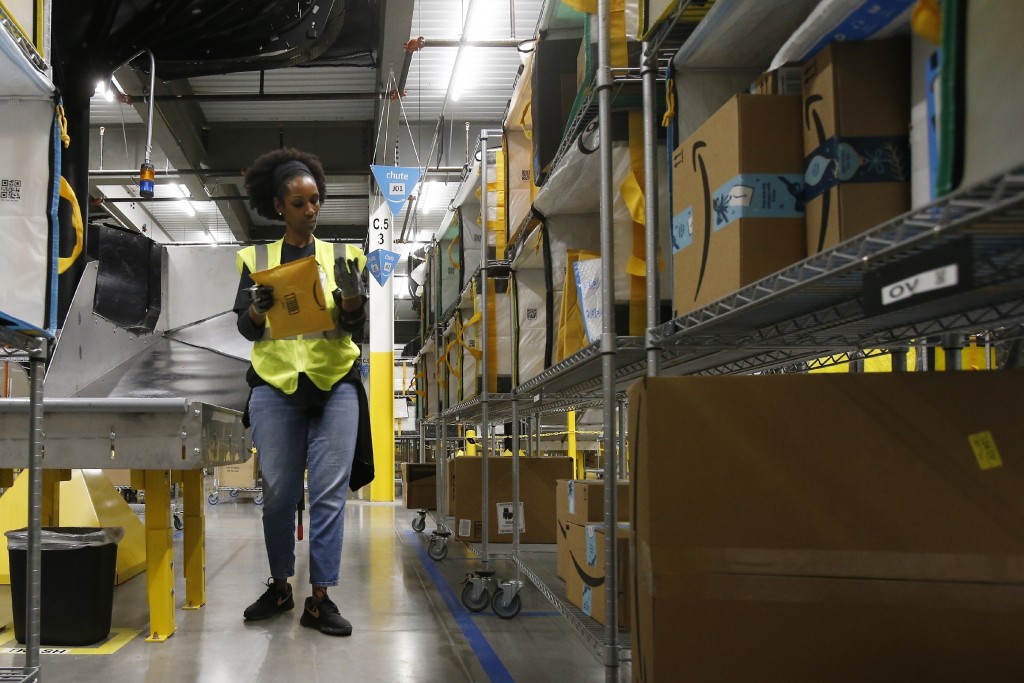 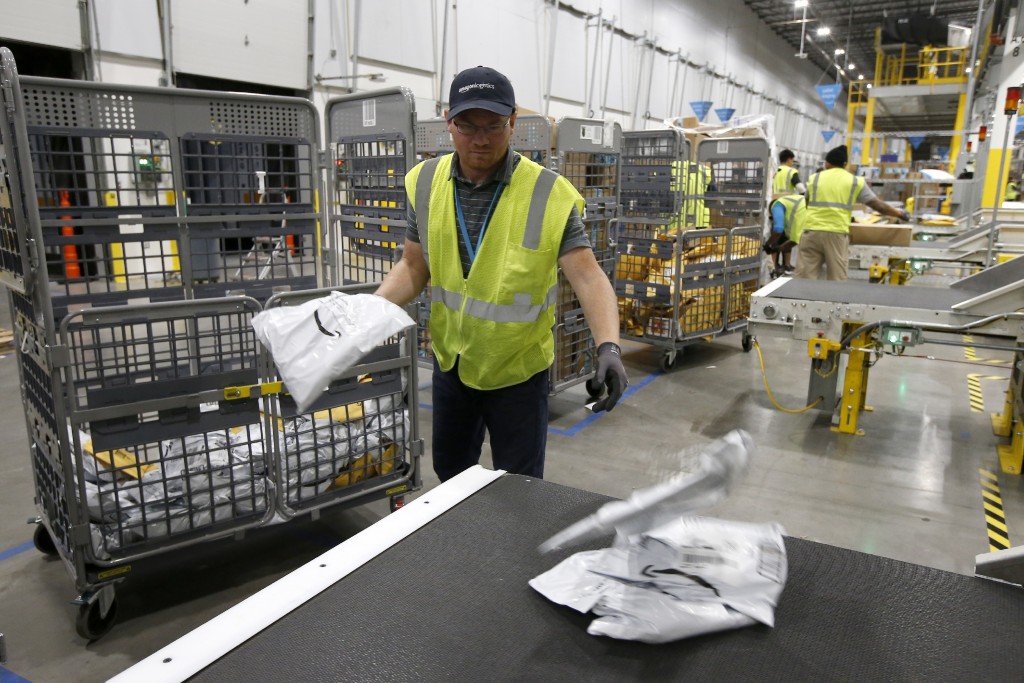 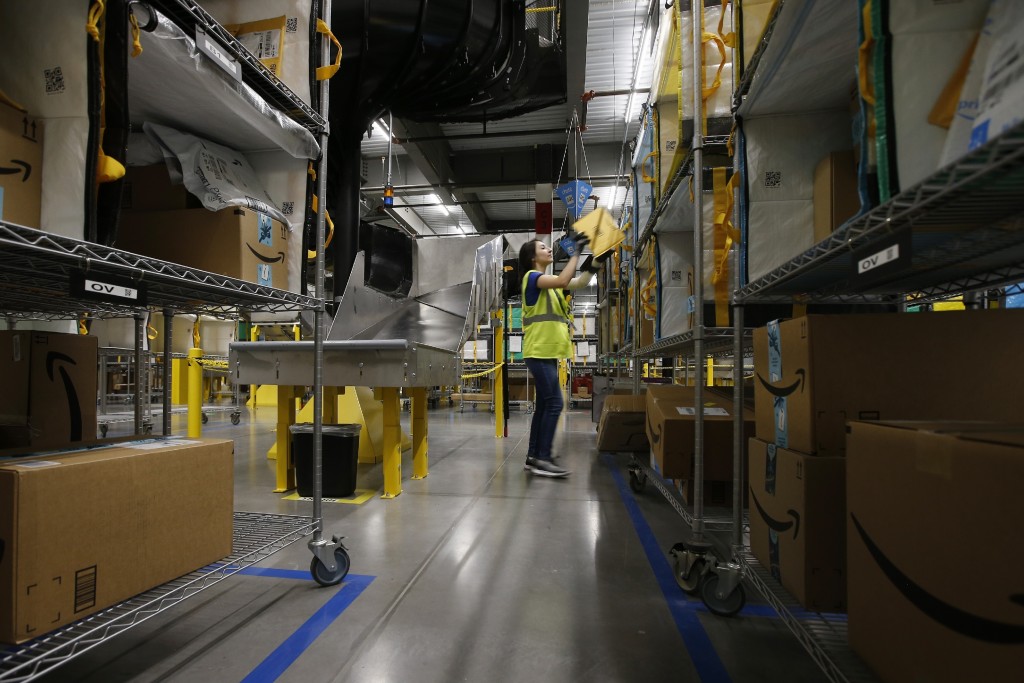 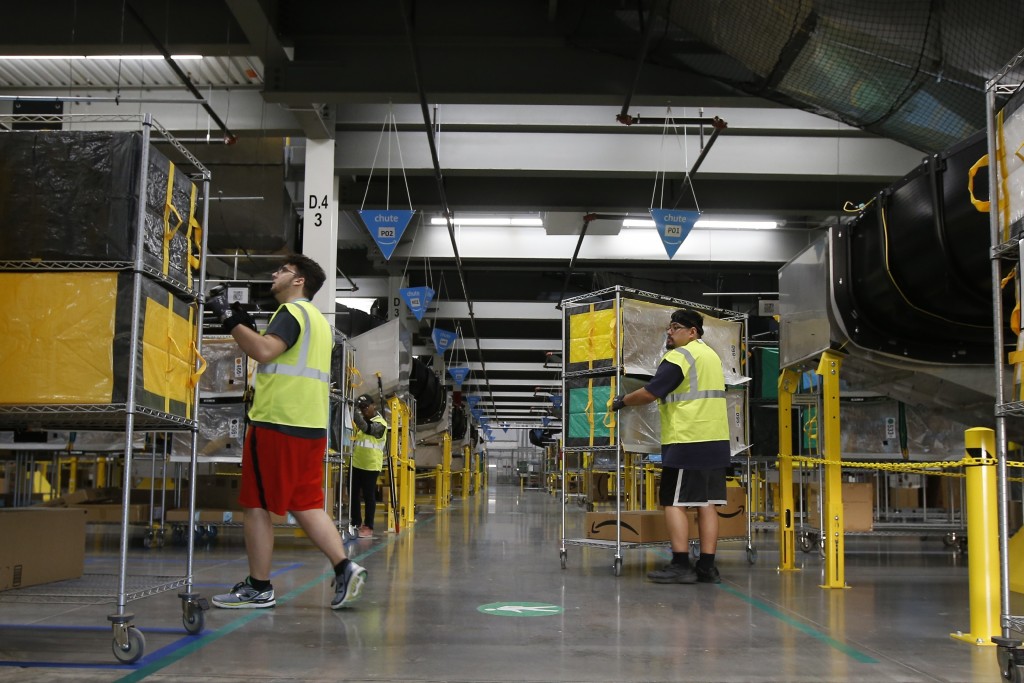 NORTH HAVEN, Conn. (AP) — Guess who's getting used to working with robots in their everyday lives? The very same warehouse workers once predicted to be losing their jobs to mechanical replacements .

But doing your job side-by-side with robots isn't easy. According to their makers, the machines should take on the most mundane and physically strenuous tasks. In reality, they're also creating new forms of stress and strain in the form of injuries and the unease of working in close quarters with mobile half-ton devices that direct themselves.

"They weigh a lot," Amazon worker Amanda Taillon said during the pre-Christmas rush at a company warehouse in Connecticut. Nearby, a fleet of 6-foot-tall roving robot shelves zipped around behind a chain-link fence.

Taillon's job is to enter a cage and tame Amazon's wheeled warehouse robots for long enough to pick up a fallen toy or relieve a traffic jam. She straps on a light-up utility belt that works like a superhero's force field, commanding the nearest robots to abruptly halt and the others to slow down or adjust their routes.

“When you’re out there, and you can hear them moving around, but you can’t see them, it’s like, ‘Where are they going to come from?’,” she said. "It’s a little nerve-racking at first."

Amazon and its rivals are increasingly requiring warehouse employees to get used to working with robots. The company now has more than 200,000 robotic vehicles it calls “drives” that are moving goods through its delivery-fulfillment centers around the U.S. That's double the number it had last year and up from 15,000 units in 2014.

Its rivals have taken notice, and many are adding their own robots in a race to speed up productivity and bring down costs.

Without these fast-moving pods, robotic arms and other forms of warehouse automation, retailers say they wouldn't be able to fulfill consumer demand for packages that can land on doorsteps the day after you order them online.

But while fears that robots will replace human workers haven't come to fruition, there are growing concerns that keeping up with the pace of the latest artificial intelligence technology is taking a toll on human workers' health, safety and morale.

Warehouses powered by robotics and AI software are leading to human burnout by adding more work and upping the pressure on workers to speed up their performance, said Beth Gutelius, who studies urban economic development at the University of Illinois at Chicago and has interviewed warehouse operators around the U.S.

It's not that workers aren't getting trained on how to work with robots safely. “The problem is it becomes very difficult to do so when the productivity standards are set so high,” she said.

Much of the boom in warehouse robotics has its roots in Amazon's $775 million purchase of Massachusetts startup Kiva Systems in 2012. The tech giant re-branded it as Amazon Robotics and transformed it into an in-house laboratory that for seven years has been designing and building Amazon's robot armada.

Amazon's Kiva purchase “set the tone for all the other retailers to stand up and pay attention,” said Jim Liefer, CEO of San Francisco startup Kindred AI, which makes an artificially intelligent robotic arm that grasps and sorts items for retailers such as The Gap.

A rush of venture capital and private sector investment in warehouse robotics spiked to $1.5 billion a year in 2015 and has remained high ever since, said Rian Whitton, a robotics analyst at ABI Research.

Canadian e-commerce company Shopify spent $450 million this fall to buy Massachusetts-based startup 6 River Systems, which makes an autonomous cart nicknamed Chuck that can follow workers around a warehouse. Other mobile robot startups are partnering with delivery giants such as FedEx and DHL or retailers such as Walmart.

Amazon this year bought another warehouse robotics startup, Colorado-based Canvas Technology, which builds wheeled robots guided by computer vision. Such robots would be more fully autonomous than Amazon's current fleet of caged-off vehicles, which have to follow bar codes and previously mapped routes within warehouses.

The tech giant is also still rolling out new models descended from the Kiva line, including the Pegasus, a squarish vehicle with a conveyor belt on top that can be found working the early-morning shift at a warehouse in the Phoenix suburb of Goodyear, Arizona. A crisscrossing fleet of robots carries packaged items across the floor and drops them into chutes based on the zip code of their final destination.

All of this is transforming warehouse work in a way that the head of Amazon Robotics says can “extend human capability” by shifting people to what they are best at: problem-solving, common sense and thinking on their feet.

“The efficiencies we gain from our associates and robotics working together harmoniously — what I like to call a symphony of humans and machines working together — allows us to pass along a lower cost to our customer,” said Tye Brady, Amazon Robotics' chief technologist.

Brady said worker safety remains the top priority and ergonomic design is engineered into the systems at the beginning of the design stage. Gutelius, the University of Illinois researcher, said that the aspiration for symphonic human-machine operations is not always working out in practice.

“It sounds quite lovely, but I rarely hear from a worker's perspective that that’s what it feels like,” she said.

Gutelius co-authored a report published this fall that found new warehouse technology could contribute to wage stagnation, higher turnover and poorer quality work experiences because of the way AI software can monitor and micro-manage workers' behaviors.

A recent journalistic investigation of injury rates at Amazon warehouses from The Center for Investigative Reporting's Reveal found that robotic warehouses reported more injuries than those without.

Reveal looked at records from 28 Amazon warehouses in 16 states and found that the overall rate of serious injuries was more than double the warehousing industry average. Amazon has countered it's misleading to compare its rate with rivals because of the company's “aggressive stance on recording injuries no matter how big or small.”

The Reveal report also found a correlation between robots and safety problems, such as in Tracy, California, where the serious injury rate nearly quadrupled in the four years after robots were introduced.

Melonee Wise, CEO of California-based Fetch Robotics, which sells its autonomous robotic carts to retailers and other clients, credits Amazon's Kiva acquisition for propelling innovation in the industry.

But she said that Amazon's system forces workers to do “un-ergonomic moves” such as reaching up high or crouching down to pick out and stow inventory into the shelves-on-wheels.

“They have robots that live in cages,” she said. “Our robots are designed to work safely around people, which is a very large distinction between the two systems.”

Amazon hasn't disclosed how its safety record at robot-powered warehouses compares to those without. But company officials remain optimistic that Amazon workers are adapting to the new technology.

At a visit with a reporter earlier in December to the warehouse in North Haven, Connecticut, Brady was explaining the workings of a powerful robotic arm called a “palletizer” when crates it was stacking on a pallet started tumbling over. Unfazed by the temporary malfunction, he watched as an employee disabled the machine, discovered an apparent structural weakness in the pallet, adjusted the stack of crates and let the robot get back to work.

“His ability to problem-solve that was like this,” Brady said, enthusiastically snapping his fingers. “What I love about that is it's humans and machines working together."