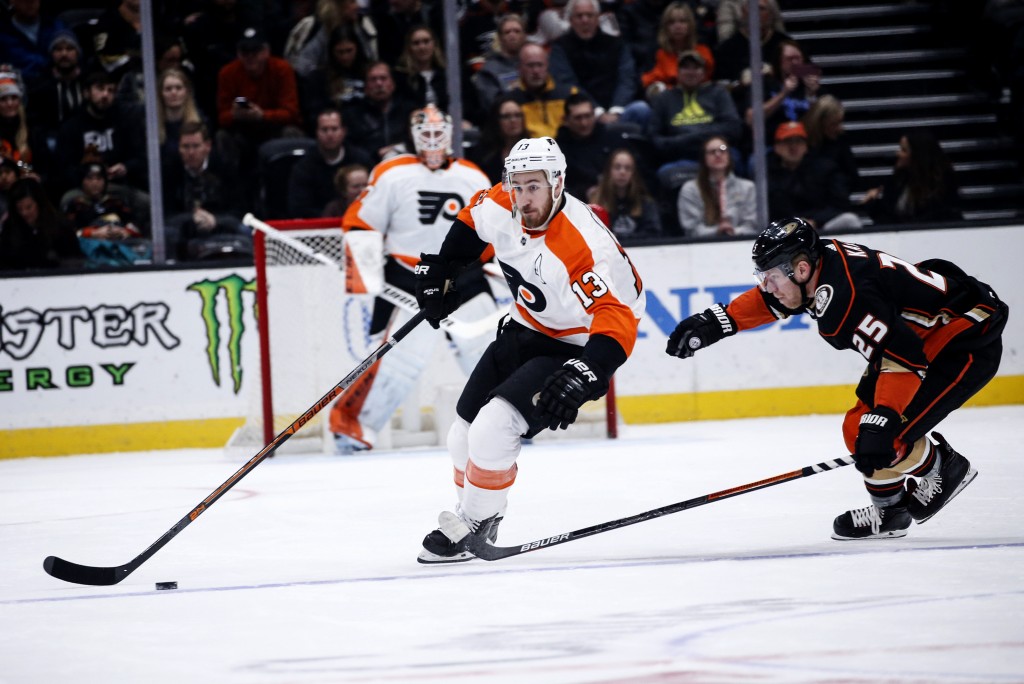 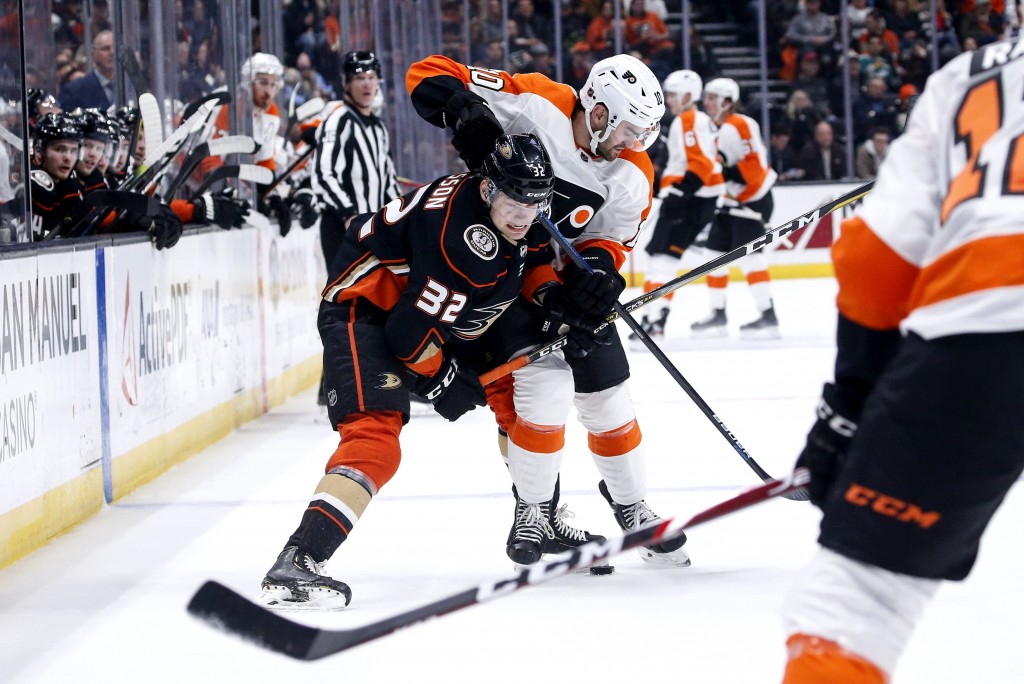 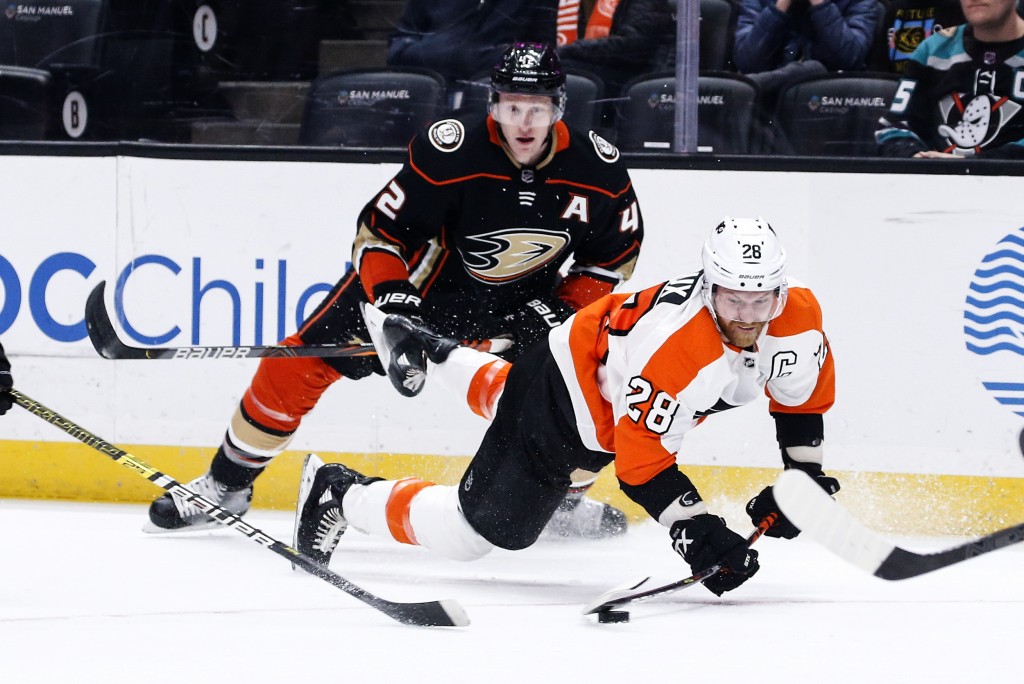 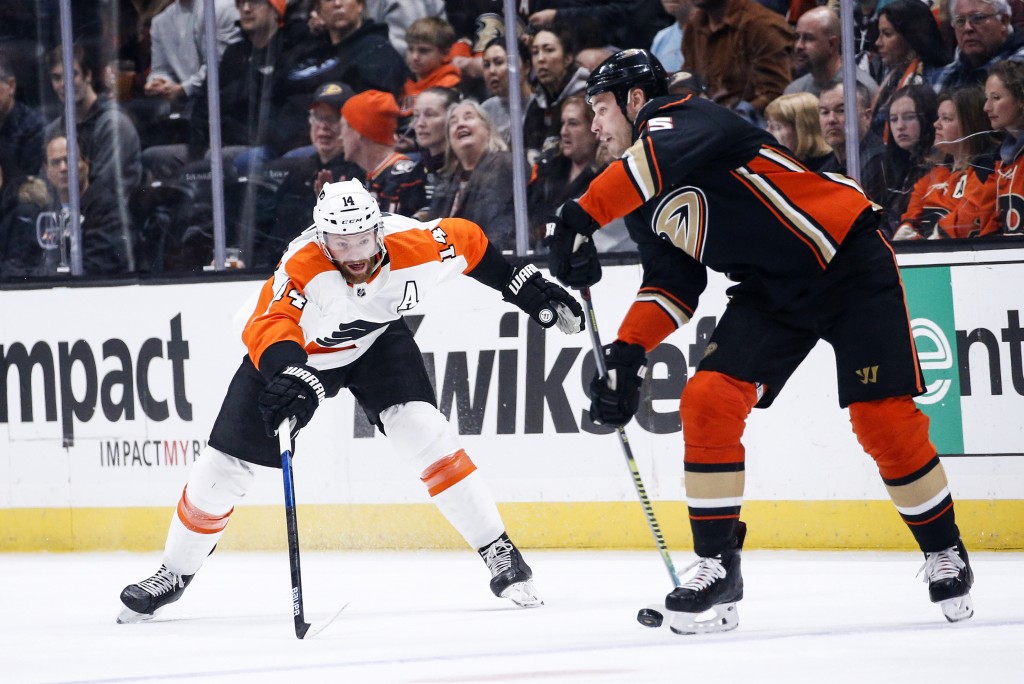 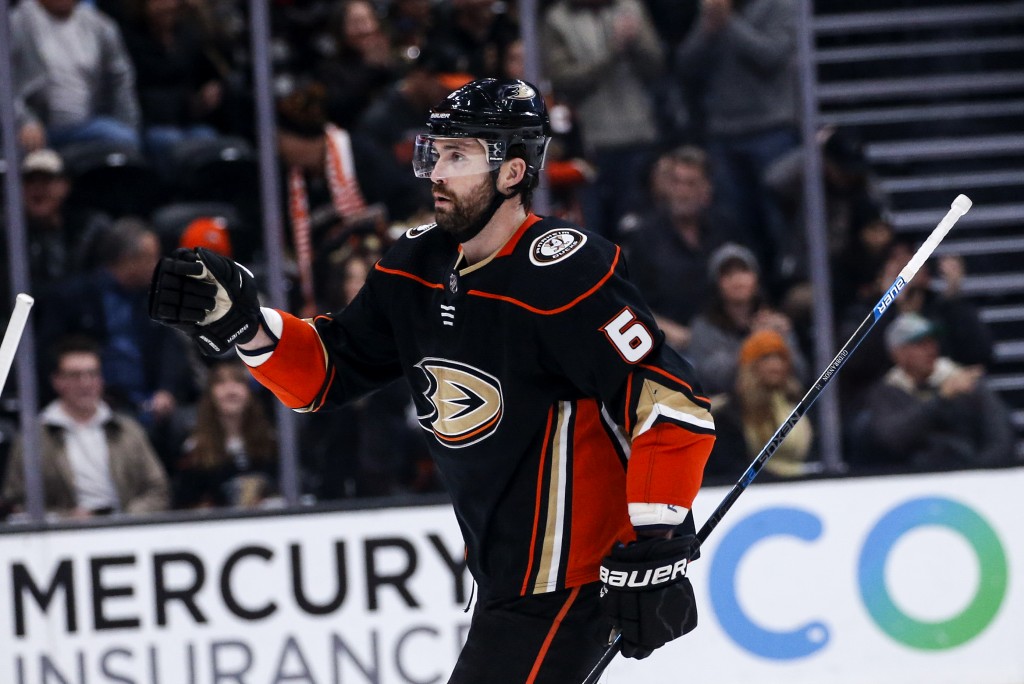 ANAHEIM, Calif. (AP) — Kevin Hayes scored at 3:53 of overtime and Brian Elliott made 27 saves in the Philadelphia Flyers' fifth victor in six games, 2-1 over the Anaheim Ducks on Sunday night.

Sean Couturier scored in the first period and Jakub Voracek had two assists for the Flyers in the second stop of their six-game West Coast trip. Elliott won it with a breakaway goal after Voracek made an exceptional pass from deep in Philadelphia's end, threading it between all three Ducks on the ice.

After Erik Gudbranson scored for Anaheim in the opening minute, Elliott shut out the Ducks the rest of the way. The veteran goalie came into Honda Center with a dismal 3-8-3 record against the Ducks along with an .800 save percentage, his worst against any opponent.

John Gibson stopped 33 shots for the Ducks, who earned points in consecutive games for the first time since Nov. 27. Two days after returning from the holiday break with a solid 4-3 win over Vegas, the Ducks failed to win their first back-to-back games since Nov. 1 despite an outstanding performance by Gibson.

Philadelphia returned from the holiday break with a perplexing 6-1 loss at struggling San Jose on Saturday, snapping a four-game winning streak. Just 22 hours after the puck dropped at the Shark Tank, the Flyers began a gritty game in Orange County against the Ducks, who lost 4-1 in Philadelphia on Dec. 17.

Gudbranson put the Ducks ahead just 35 seconds in with a long shot that knuckled under Elliott's right arm before going off the post and in. The defenseman got his third goal in 28 games since joining Anaheim in a trade with Pittsburgh in late October, nearly matching his career-high of four goals set in 76 games with Florida in the 2014-15 season.

Couturier evened it midway through the opening period when he jumped on the pad rebound of Voracek's shot and slapped it underneath Gibson for his 10th goal. The point was Couturier's 16th in 14 career games against Anaheim, but he has just 10 goals near the midway point of this season after scoring 64 in the previous two campaigns.

The Ducks also failed to capitalize on a two-man advantage for 70 seconds early in the third period.

NOTES: Ducks F Rickard Rakell, who scored Anaheim's only goal in Philadelphia earlier this month, missed his third straight game with an upper-body injury. He resumed skating Friday after getting hurt before the Christmas break. ... Before the game, Philadelphia sent rookie C Morgan Frost back to Lehigh Valley of the AHL and activated Michael Raffl from long-term injured reserve. Raffl had been out since early December with a broken finger. Frost, the Flyers' first-round pick from 2017, had two goals and five assists in 18 up-and-down games after making his NHL debut Nov. 19. ... Flyers C Scott Laughton missed his seventh straight game with a groin injury, but is close to returning. ... Philadelphia F David Kase, the 22-year-old younger brother of Anaheim F Ondrej Kase, was sent back to the AHL last week. David Kase scored his first career NHL goal against his brother's Ducks earlier this month.

Ducks: At Vegas on Tuesday night.