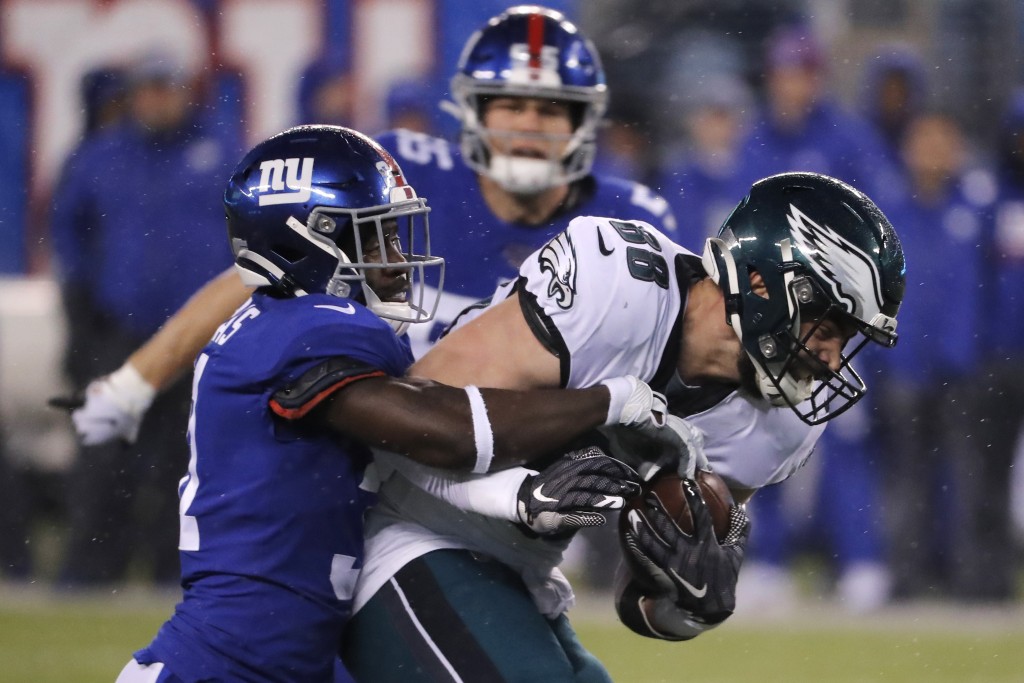 EAST RUTHERFORD, N.J. (AP) — Carson Wentz and the Philadelphia Eagles are heading to the playoffs thanks to a group of players off the practice squad.

Boston Scott ran for three touchdowns in the second half and the injury-ravaged Eagles beat the New York Giants 34-17 on Sunday to win the NFC East title.

Philadelphia hosts either San Francisco (12-3) or Seattle (11-4) in a wild-card game next weekend. The 49ers and Seahawks battle for the NFC West title Sunday night with the loser getting the No. 5 seed and a trip to Philly.

Then they lost running back Miles Sanders and three-time Pro Bowl right guard Brandon Brooks in the first half.

But Wentz guided the Eagles (9-7) to their fourth straight win and second division title in three seasons.

Wentz threw for 289 yards, including a 24-yard TD pass to Josh Perkins, who was promoted from the practice squad on Nov. 30.

Scott had TD runs of 7, 2 and 2 yards. He came off the practice squad earlier in the season. Scott had 54 yards rushing and 84 receiving.

While the Eagles head to the playoffs for the third straight year seeking their second Super Bowl title, the Giants (4-12) face more uncertainty. Coach Pat Shurmur's job status is a question after going 9-23 in two seasons.

Scott turned a screen pass into a 39-yard gain, spinning and twisting his way to the 2 to set up his last touchdown that made it 34-17.

The Giants stayed close into the fourth quarter. Saquon Barkley's 68-yard TD run tied it at 17-17 in the third quarter.

But Deontay Burnett, another player off the practice squad, made a sliding 41-yard catch to set up Jake Elliott's 50-yard field goal that gave the Eagles a 20-17 lead in the fourth.

After Fletcher Cox scooped up Daniel Jones' fumble and ran it to the 2, Scott ran it in for a 27-17 lead.

Scott's first TD run gave Philadelphia a 17-10 lead. The Eagles started that drive at their 38 after Cre'Von LeBlanc batted down a pass on fourth down.

Jones tossed a 20-yard touchdown pass to Golden Tate to tie it at 10-10 on the opening drive of the third quarter.

Scott made a one-handed, over-the-shoulder grab on a screen pass and turned it into a 29-year gain earlier on Philadelphia's first TD drive. Wentz kept it going with a successful sneak on fourth-and-1 from the Giants 26 one play before his TD toss to Perkins.

Wentz set a single-season franchise record with 4,039 yards passing despite not having one wide receiver reach 500 yards. Alshon Jeffery had 490, Nelson Agholor had 363 and DeSean Jackson had 159.

Sanders became the first Eagles player since Don Johnson in 1953 to lead all rookies in scrimmage yards, finishing with 1,327. He surpassed Oakland's Josh Jacobs before getting injured.

Eagles: Sanders injured his ankle. Brooks was carted off the field after suffering a shoulder injury on the first extra point. CB Avonte Maddox left with an undisclosed injury. CBs Ronald Darby and Jalen Mills already were out of the lineup.

Giants: RB Eli Penny left with a back injury in the first half.