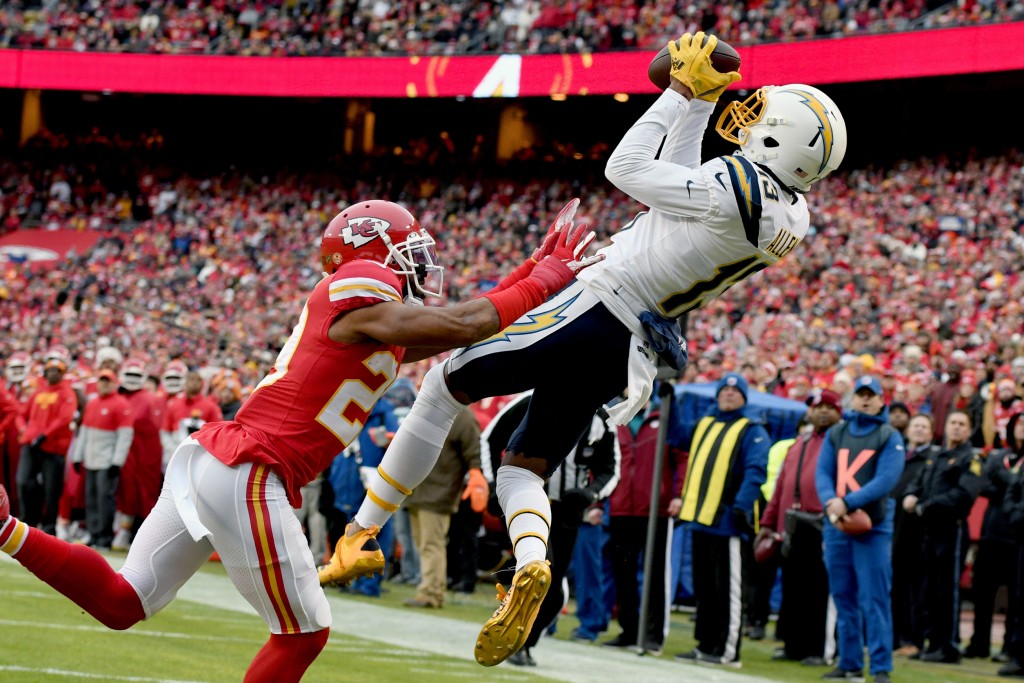 KANSAS CITY, Mo. (AP) — Mecole Hardman returned a kickoff 104 yards for a touchdown, Damien Williams took a handoff 84 yards for another score, and the Kansas City Chiefs beat the Los Angeles Chargers 31-21 on Sunday to leapfrog New England for the No. 2 seed in the AFC and a first-round playoff bye.

The Chiefs (12-4) long ago clinched their fourth straight AFC West title, but they needed a win and an unlikely Dolphins victory over the Patriots to get a week off. And just as Williams punched into the end zone in the closing minutes for his second touchdown of the game, the Dolphins were scoring the go-ahead TD with 24 seconds left for their 27-24 upset in Foxborough.

Now, the Patriots will have to play next weekend while the Chiefs set their sights on the divisional round of the playoffs.

The Chargers (5-11) made it stressful for Kansas City in the fourth quarter, though, driving for a touchdown that got them within 24-21 with 5:23 to go. But the Chiefs answered with an eight-play, 77-yard scoring drive that allowed them to wrap up their sixth straight win overall and 11th victory in 12 meetings with their longtime division rival.

Patrick Mahomes threw for 174 yards and a touchdown, and Williams finished with 124 yards rushing on just 12 carries, while the Chiefs defense continued an impressive stretch of late-season dominance.

They held Philip Rivers to 281 yards passing with two touchdowns and two interceptions in what could be the veteran quarterback's final game for the Chargers. His contract is up after this season, and while Rivers has said he would like to play next year, nobody is quite sure whether that will happen in Los Angeles.

The interceptions by Tryann Mathieu in the end zone and Daniel Sorensen to essentially end the game gave the Chargers quarterback 18 picks for the season. It also drove Rivers' total turnover count to 24.

The Chiefs offense has long been the headliner, but it has been their revamped defense under coordinator Steve Spagnuolo that has carried them on their current win streak. They had not allowed a touchdown the past two games, and Kansas City stretched that to 10 consecutive quarters when it forced a punt on the Chargers' initial possession.

The streak finally ended when Rivers found Keenan Allen in the end zone early in the second quarter — a drive that proved doubly costly for the Chiefs. Safety Juan Thornhill (knee) and cornerback Bashaud Breeland (illness) left the game.

The Chiefs regained the lead late in the half. Mahomes zipped a 30-yard strike to Hardman that set up a 24-yard touchdown pass to Demarcus Robinson, giving them a 10-7 advantage heading into the locker room.

The back and forth continued in the second half. And it happened in a flash.

Mahomes threw just his fifth interception of the season, and second in two games against Los Angeles, and the Chargers punched into the end zone three plays later for a 14-10 lead. On the ensuing kickoff, Hardman showed why he was voted a Pro Bowl return specialist, taking it back 104 yards for a touchdown that restored the Chiefs' lead.

The Chiefs scored almost as quickly when they got the ball back.

After forcing a punt, Williams took the first-down handoff and skirted to his left. Three defenders converged on him but none of them wrapped him up. The oft-injured running back made a nifty pirouette, found the open field and sprinted the rest of the way for the 84-yard touchdown.

At that point, eyes shifted to cell phones and scoreboards for the outcome in Foxborough.

They remained there as the Chiefs put away another win over the Chargers, and the Dolphins wrapped up an improbable victory over Tom Brady and Co. to shakeup the playoff pecking order.

Terrell Suggs had his first sack with the Chiefs late in the third quarter. It not only forced the Chargers to punt in a close game but moved the longtime Ravens pass rusher past Demarcus Ware for eighth on the NFL career list with 139.

Chargers: Defensive back Desmond King left in the first half with an ankle injury.

Chiefs: Thornhill's injury looked particularly bad — he needed the help of two trainers to limp off the field, never putting any weight on his knee. The Chiefs already were missing cornerback Morris Claiborne to a shoulder injury, so losing Thornhill and Breeland left Kansas City depleted in the secondary.

Chargers get ready for the beach.

Chiefs get ready for the playoffs.