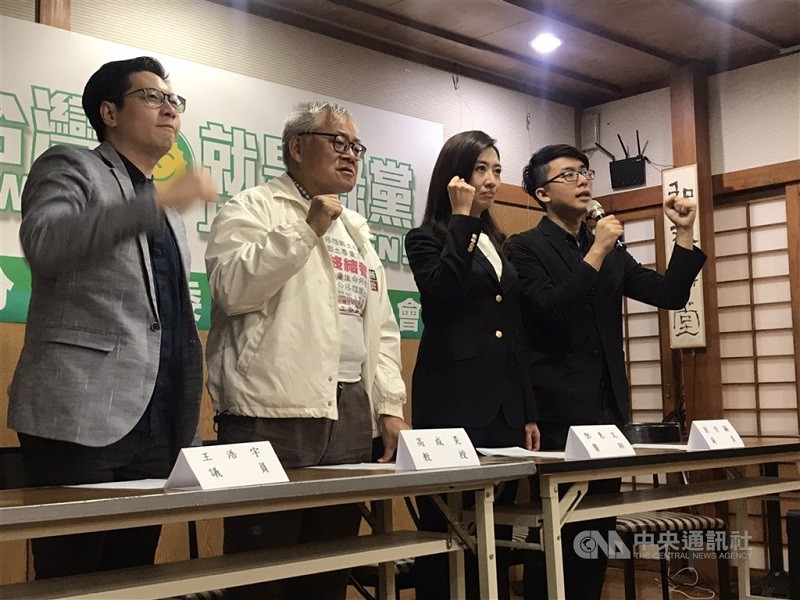 TAIPEI (Taiwan News) — A party that has been evolving for 23 years, the Green Party Taiwan (GPT) seeks to prove that integrity and progressive values are cornerstones of its platform as its pursues seats in the legislature.

This has been a critical year for the GPT, with the party deciding to join the legislative elections unattached to any coalition and intending to replicate the success of its peers in Europe, who led the "green wave" in May and secured critical seats in the European parliament.

"We believe the mission of minority parties is to bring up the topics that are neglected by major parties," said Liu Chung-hsien (劉崇顯), GPT spokesman. "These topics might not obtain overwhelming support in society but are still important for Taiwan. We have to become advocates to increase awareness [of these topics], such as the legalization of euthanasia and the right of same-sex couples to adopt children and seek surrogates."

This year, criticism has surrounded the transformation of the GPT, with some saying it has become politicized.

However, this change has not occurred without consideration. "In the past, the party avoided expressing its political tendencies. We touted environmental protection and called for support, but we were always sacrificed in the conflict between the two major parties," Liu said.

He explained what he sees as the reality of Taiwanese elections: voters' fear of seeing someone they disapprove of being elected always triumphs their willingness to choose a capable candidate, and the choices wind up being constrained between candidates from the two leading parties.

That is why the party has pushed the "Tsai Ing-wen (蔡英文) for president, Green Party for legislature" strategy in this election. It is making an effort to convey to supporters that voting for the Green Party will not interrupt the defense of the country's sovereignty.

The GPT has split with the Social Democratic Party, with which it secured a combined 2.52 percent of the vote in the 2016 legislative elections, and is placing its confidence in the charisma of its premier candidate. GPT candidates believe Teng Hui-wen (鄧惠文), a writer-broadcaster psychiatrist, is capable of leading the party past the five percent threshold required to enter the legislature.

Since 2014, the party has successfully won several local elections, including the city councilor seats in Taoyuan and Hsinchu. The upcoming legislative election will not only be an evaluation of the party in the midst of its transformation but also an indicator of whether the Legislative Yuan is ready for more diverse voices.