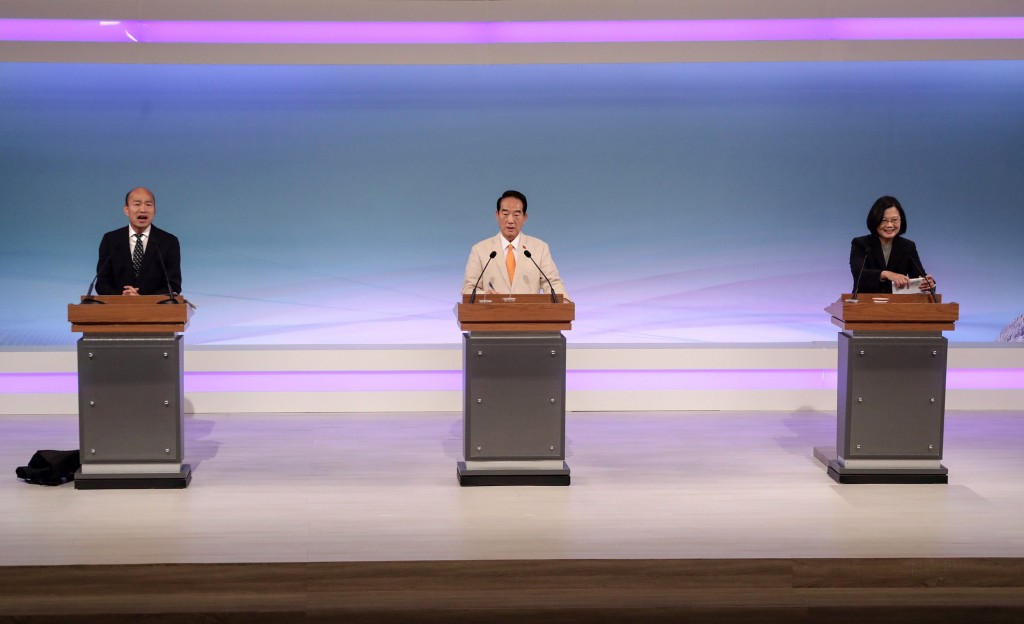 TAIPEI (Taiwan News) — Taiwan’s relationship with China was the focus of the presidential debate on Sunday afternoon (Dec. 29) in which President Tsai Ing-wen (蔡英文) accused her main challenger, Han Kuo-yu (韓國瑜) of the Kuomintang (KMT), of kowtowing to China.

In return, Han criticized Tsai, who is seeking a second term, for calling him a supporter of China’s “one country, two systems” formula for Taiwan. He fought back by listing visits made by members of the ruling Democratic Progressive Party (DPP) to Chinese officials in the past, contending the president and her party would “sell out Taiwan” to China.

Han, however, did not directly address questions proposed by a local journalist about his cross-strait policy and how he would defend the country’s sovereignty in the face of China’s pressure , saying the question showed the journalist was “trapped by ideology.” He also did not directly answer Tsai’s question about his endorsement of a statement made by a civil group in support of “unification” with China.

Han said he did not agree with the civil group’s political stance but that he had merely shown respect for freedom of expression. He then threw the question back at the president and accused her of acknowledging that Taiwan was part of China when she served as a minister of the Mainland Affairs Council in the 2000s.

Tsai responded that Han had deliberately quoted her out of context. She said her statement was based on the condition that China would promise never to resort to the use of force against Taiwan.

The president then cast doubt on Han’s meeting with Chinese officials in Hong Kong in March, which she described as “expressing the atmosphere of the ‘one country, two systems.’”

Speaking about her cross-strait policy, Tsai reiterated that her administration would not take provocative actions or risks that would endanger regional stability, nor would it curb exchanges between Taiwan and China. Beijing has cut off official contact with the Tsai administration for the past three years on account of the latter's supposed pro-independence views and ramped up pressure on the island nation in the military, economic, and diplomatic spheres.

Tsai hit back by saying that China was the biggest threat to Taiwan’s security. China has been carrying out full-fledged infiltration operations against Taiwan, said Tsai, emphasizing that she will fight off the challenges posed by China.

The president added that she would not allow Taiwan to become the next Hong Kong. Pro-democracy protests against Beijing’s encroachment on the semi-autonomous territory have lasted for more than six months.

Speaking on national defense issues, Han contended that the best commander in chief would be the one that “avoid[s] wars.” He emphasized that if he were elected president, he would improve national security by building “smart” and “small but agile” armed forces.

Tsai countered by saying she had put more effort into elevating the nation’s defense capabilities than any of her predecessors. She said that under her command, the military would constantly be prepared for any attempts to invade Taiwanese territory.