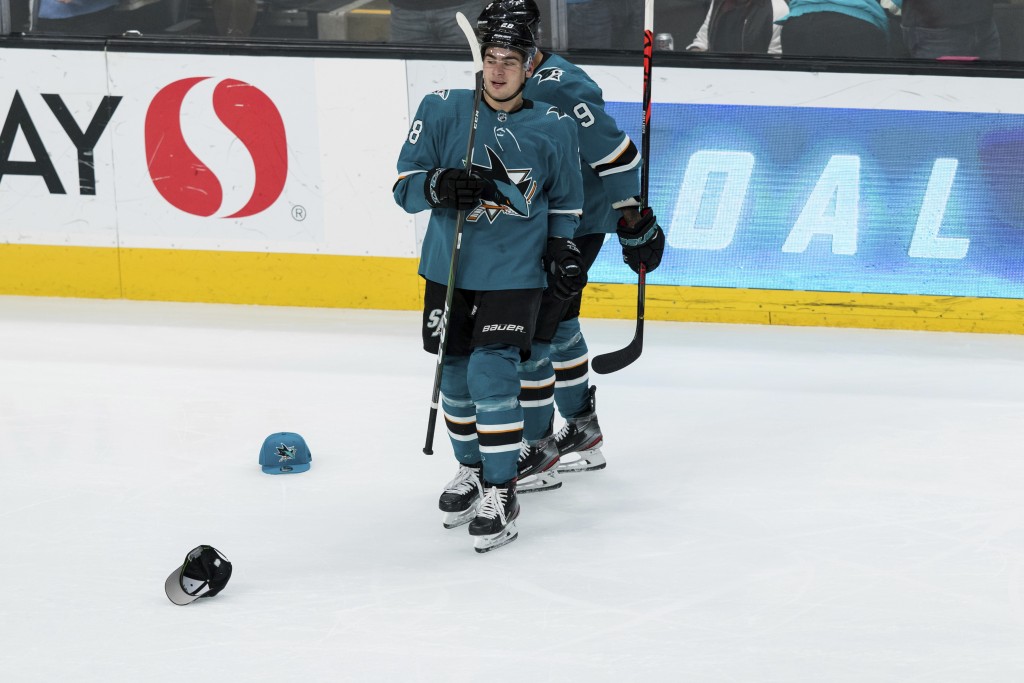 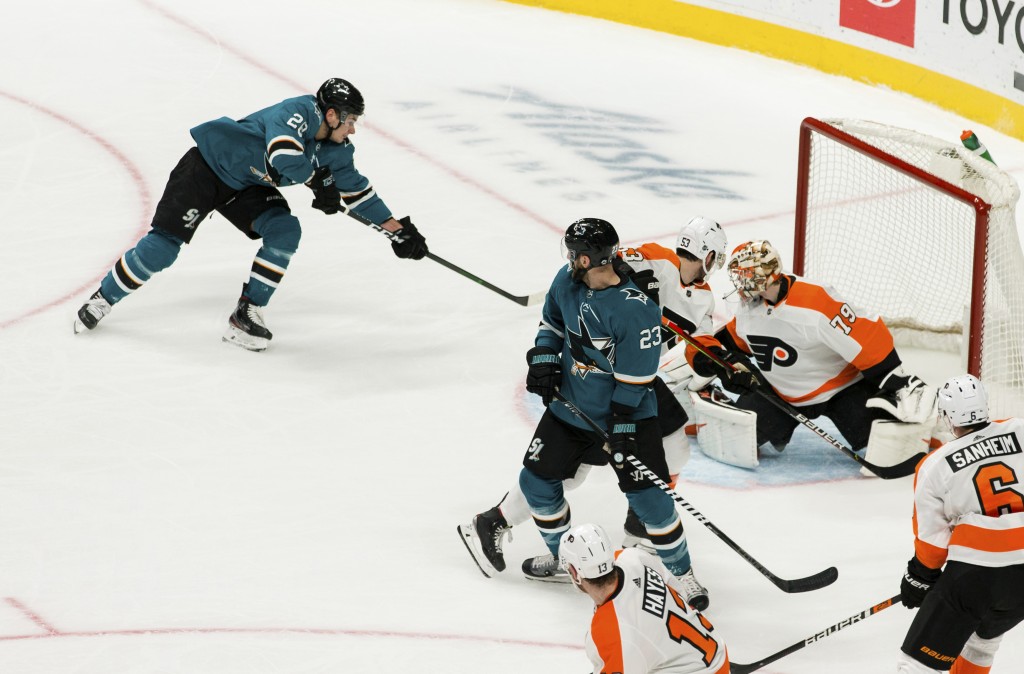 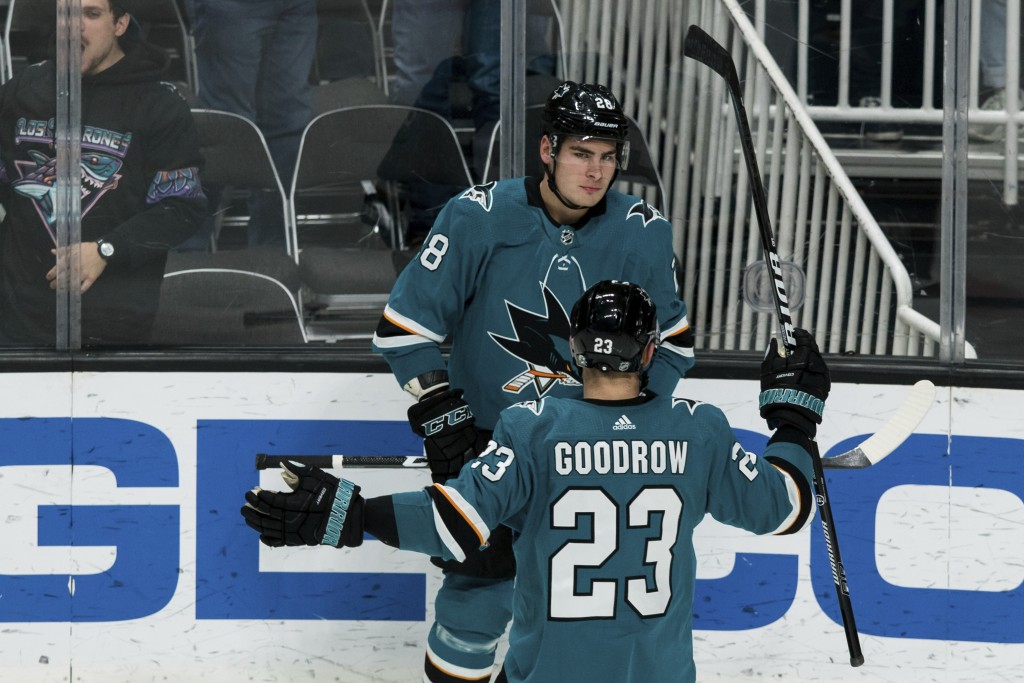 Rookies Mario Ferraro and Joel Kellman each got his first NHL goal, and Patrick Marleau also scored to help the Sharks snap a four-game skid and win for the second time in 12 games.

Meier snapped a four-game pointless streak with his 12th, 13th and 14th goals in his second multi-goal game of the season.

Meier scored 9:21 into the second when he tipped in Brent Burns' shot from the blue line that gave San Jose a 3-0 lead. Meier got his second of the night at 1:36 of the third — just45 seconds after Provorov got the Flyers on the scoreboard — as he finished a 2-on-1 with a backhander off a pass from Evander Kane. He completed the hat trick with 7:08 left as he tapped in a shot from just outside the crease off another pass from Kane.

Jake Virtanen also scored his 11th goal of the season, and Tyler Motte had his second for the Canucks.

Anze Kopitar and Tyler Toffoli scored for Los Angeles, which was playing its second game in two nights following a 3-2 overtime win in San Jose. Jonathan Quick made 23 saves for the Kings.

Starting his ninth straight game since Dec. 10, Markstrom improved his record over that span to 5-4-0 as he earned his 100th career NHL win.

Ryan Strome had two goal and two assists for the Rangers, Brett Howden and Mika Zibanejad also scored, and Artemi Panarin picked up his third assist of the night when he set up DeAngelo’s winner. Alexandar Georgiev stopped 43 shots to help New York win its second straight after a 1-3-1 stretch.

The Maple Leafs trailed 4-2 after two periods before Engvall redirected a point shot from Tyson Barrie at 6:22 of the third to pull Toronto within one and Matthews slammed in a pass from Nylander for the tying goal with 53 seconds remaining.

Lucas Wallmark, Jordan Staal, Martin Necas and Andrei Svechnikov also scored for the Hurricanes as they snapped a three-game losing streak on the opening night of a seven-game homestand. Petr Mrazek stopped 25 shots.

Nic Dowd, Alex Ovechkin, Evgeny Kuznetsov and Radko Gudas scored and John Carlson had two assists for the Capitals, who lead the NHL with 59 points and had won three of their last four games.

SUNRISE, Fla. (AP) — Mike Hoffman had a goal and two assists and Florida overcame a two-goal deficit to beat Detroit.

Evgenii Dadonov, Brett Connolly, Dominic Toninato and Anton Stralman also scored to help the Panthers win for the fourth time in five games. Chris Driedger made 35 saves in his fourth NHL start to improve to 3-1-0.

Dylan Larkin had a goal and an assist for Detroit, and Darren Helm, Frans Nielsen and Luke Glendening also scored. The Red Wings have lost five in a row and are 2-15-2 their last 19. Jimmy Howard, playing his second game after a 10-game injury absence, stopped 25 shots.

Bryan Rust’s initial point shot missed the net. Evgeni Malkin gathered the puck behind the net and gave it to Guentzel, who tucked it inside the left post for the winning goal.

Rust scored twice, including an empty-netter, and added two assists as Pittsburgh won for the ninth time in 11 games. Alex Galchenyuk and Kris Letang scored power-play goals, while Dominik Kahun also scored for Pittsburgh, which has points in 13 of its last 16 against Nashville dating back to Oct. 21, 2010.

Evgeni Malkin had three assists to stretch his point streak to five games, and Matt Murray stopped 44 shots to win for the second time in nine starts.

Mikael Granlund’s 100th career goal – and second of the game – at 8:56 of the third tied the score at 4-4 as Nashville rallied from a pair of three-goal deficits. Viktor Arvidsson got his third goal in three games, while Craig Smith also scored for the Predators, who lost their second straight after earning points in their previous five games.

Steven Stamkos had a goal and an assist to reach 800 career points, and Mitchell Stephens scored for the first time in his career to hel the Lightning leapfrogged the Canadiens for fourth place in the Atlantic Division. Andrei Vasilevskiy made 39 saves.

Pavelski opened the shootout by scoring on Philipp Grubauer, and Bishop followed with two saves. Radulov bested Grubauer with a low shot to end it.

Grubauer stopped 38 shots, including six in overtime. The Avalanche killed a power play in the extra period.

Tyler Seguin and Denis Gurianov scored for the Stars. Dallas broke a two-game skid and moved ahead of Winnipeg into third in the Pacific Division.

J.T. Compher and Ian Cole scored for the Avalanche. Colorado lost for the fourth time in five games (1-3-1) but held onto second place in the Pacific.

LAS VEGAS (AP) — Mark Stone scored twice and Vegas took over sole possession of first place in the Pacific Division for the first time since Oct. 4.

Chandler Stephenson and Paul Stastny also scored for the Golden Knights, who improved to 10-4-2 in their last 16 games. Marc-Andre Fleury, who came in having lost five of his last eight starts while allowing 21 goals in his previous five games, made 27 saves for his 454th career win to move into a tie with Curtis Joseph for sixth all-time.

Michael Grabner scored the lone goal for the Coyotes, who are 13-3-1 when scoring a power-play goal this season, but were 0 for 5 with a man advantage. Antti Raanta made his 15th start of the season for Arizona, but was pulled at the 1:54 mark of the second period after giving up four goals on 16 shots. Adin Hill, recalled on Dec. 20, made 20 saves in his season debut.