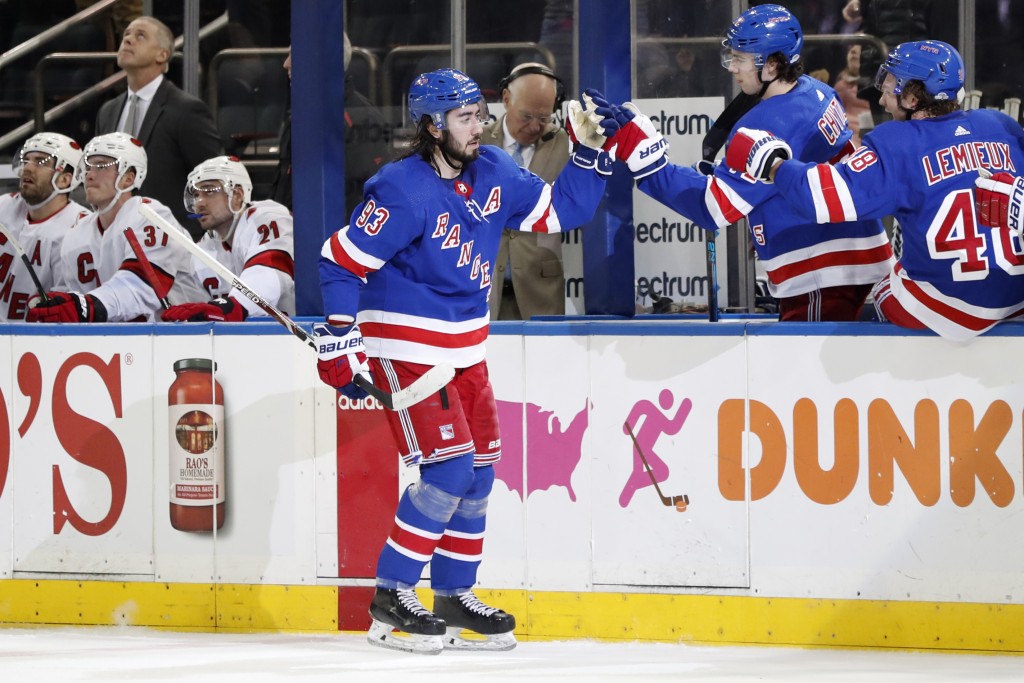 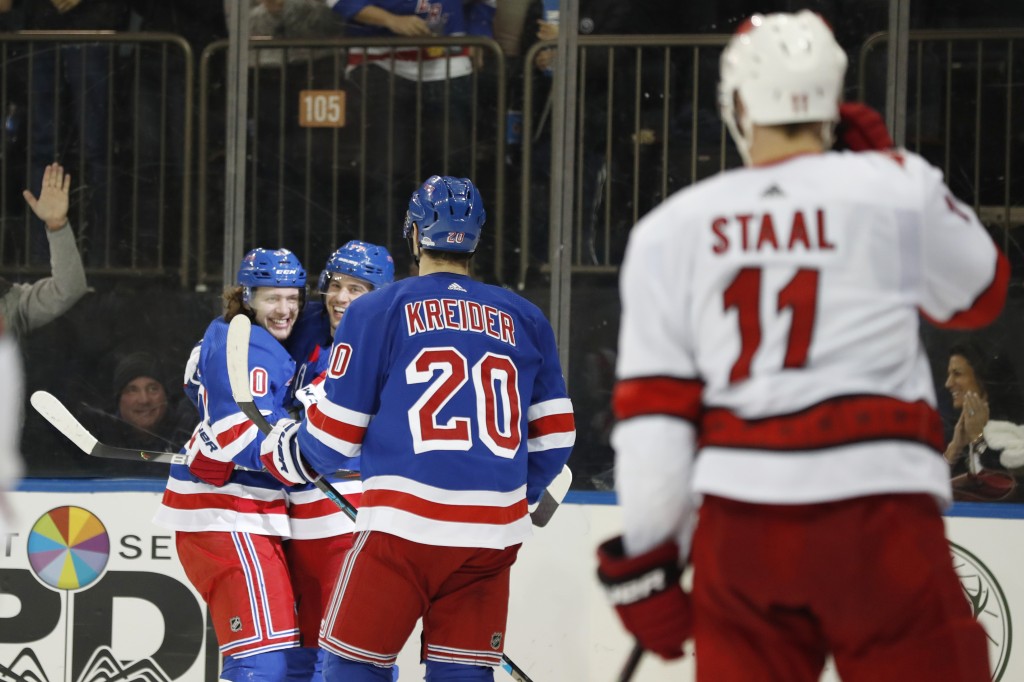 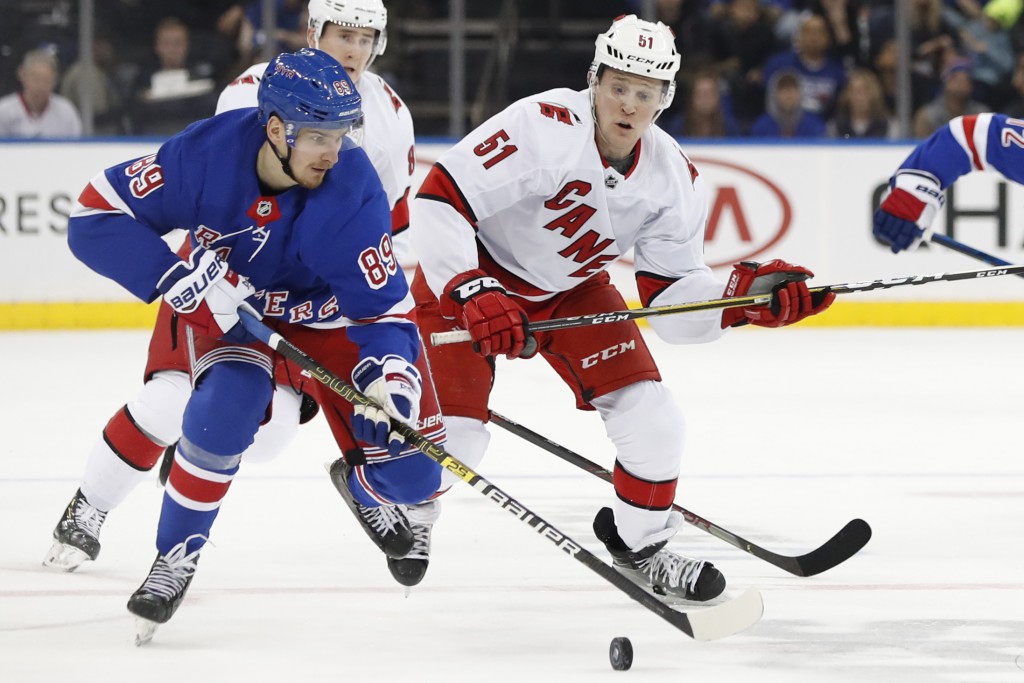 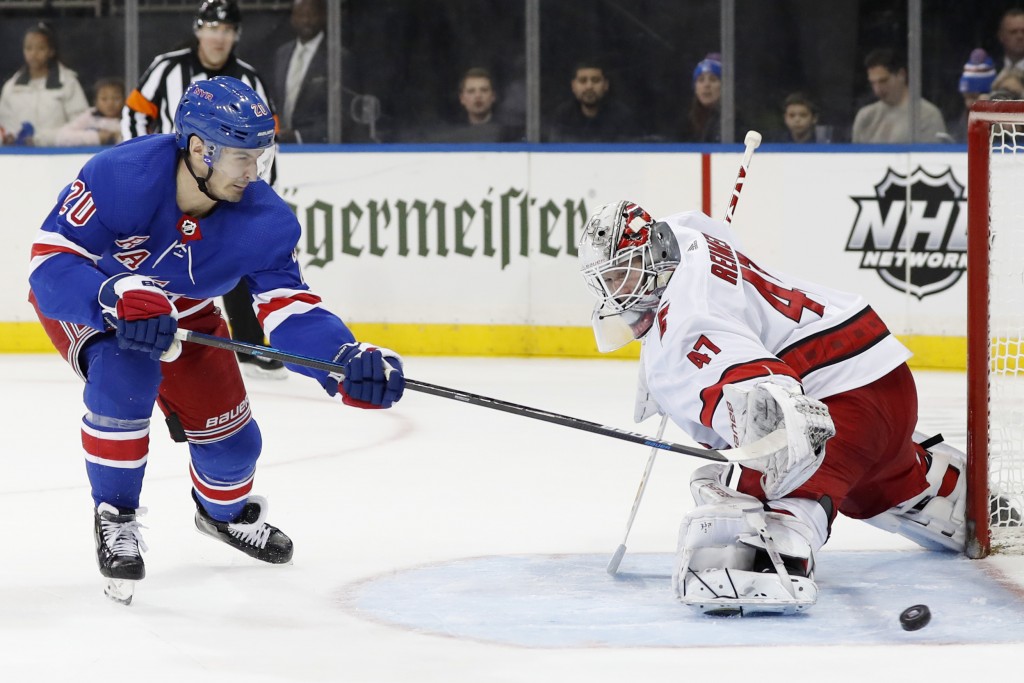 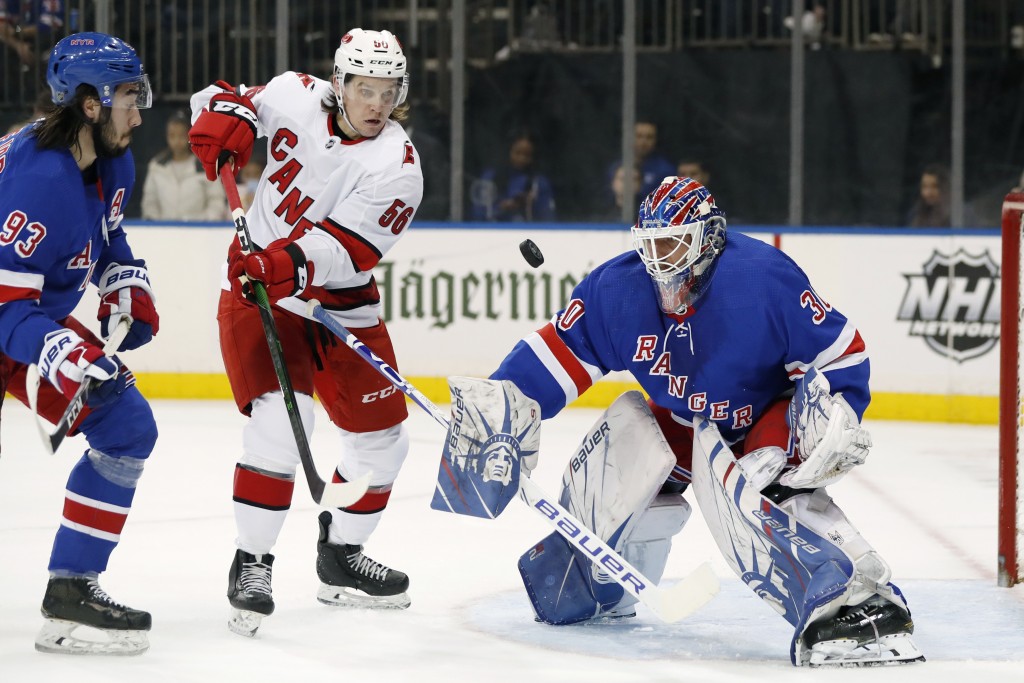 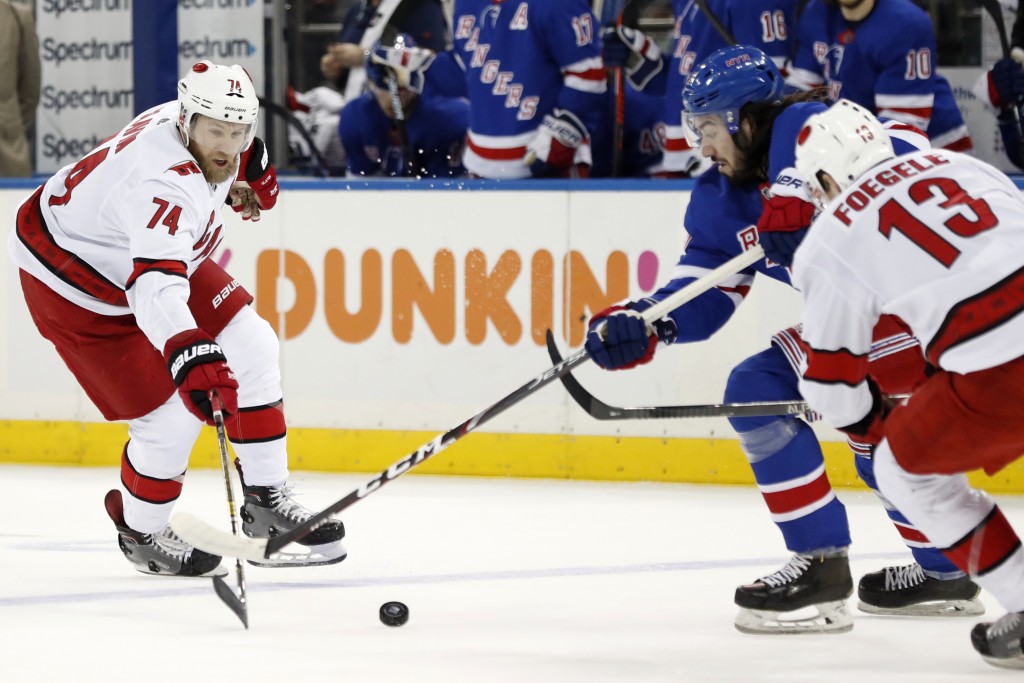 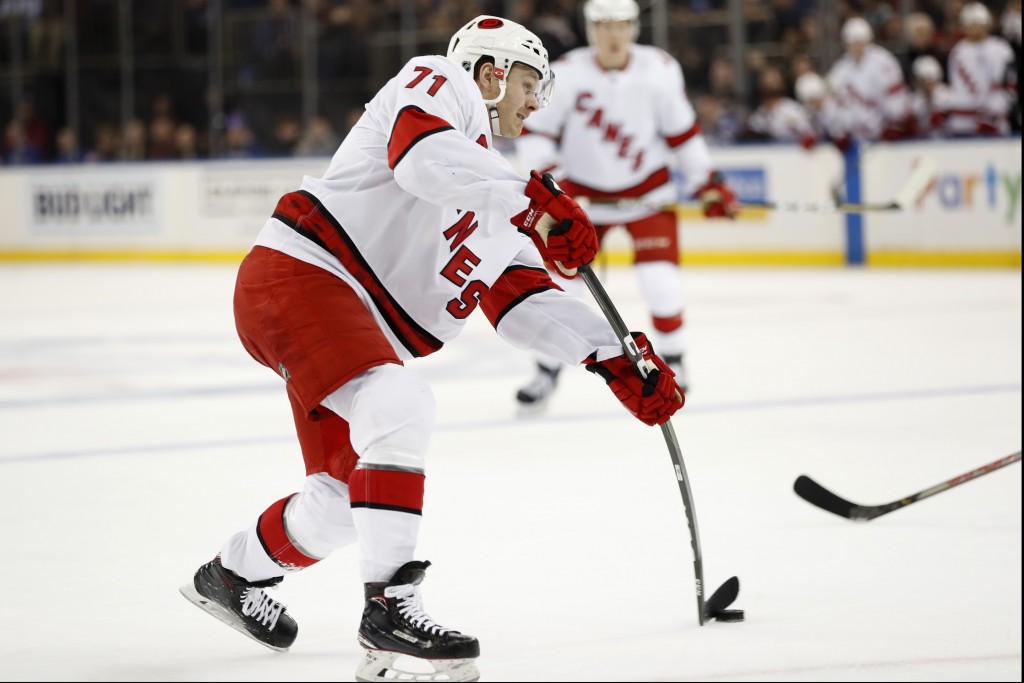 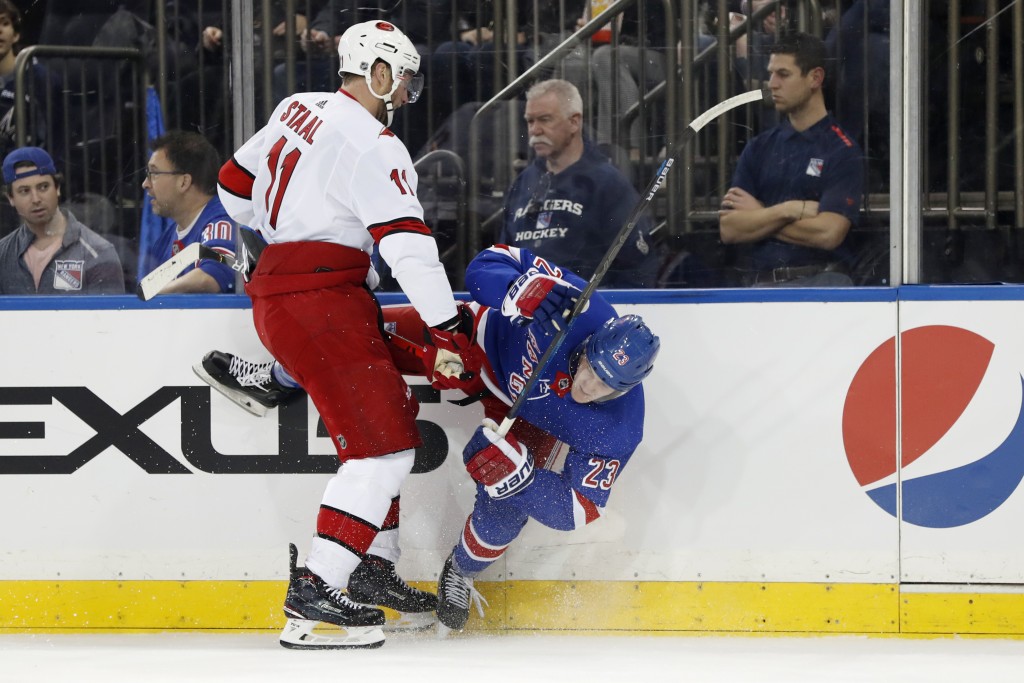 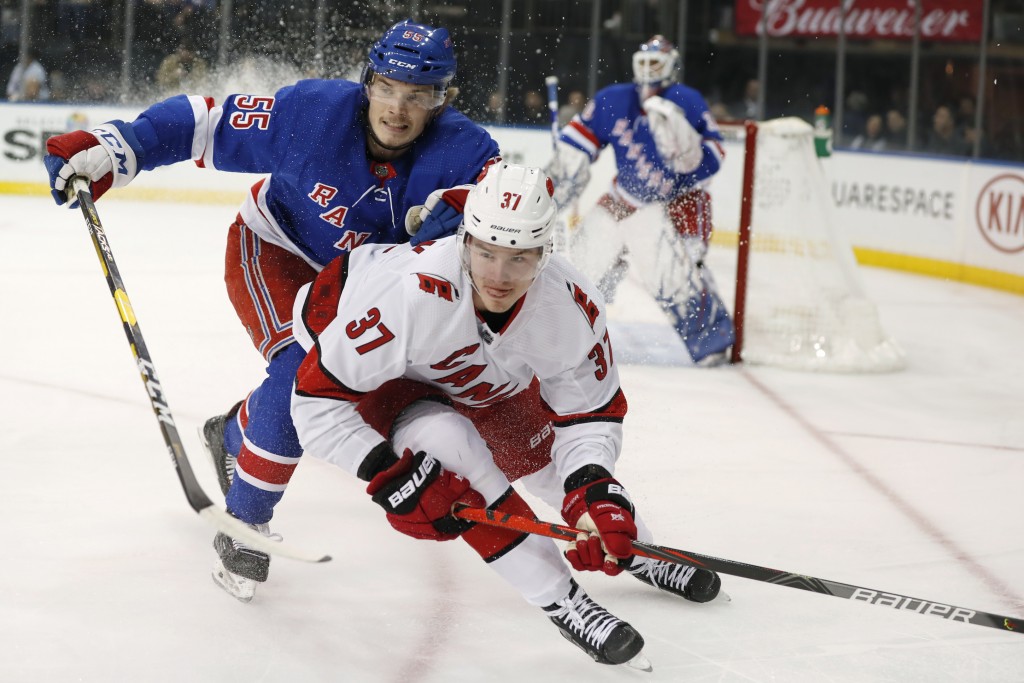 Lundqvist improved to 3-0-0 against the Hurricanes this season while stopping 125 of 132 shots in the wins.

Lucas Wallmark had a goal and an assist, Brett Pesce and Sebastian Aho also scored, and Teuvo Terravainen had two assists for the Hurricanes. James Reimer finished with 19 saves for Carolina, which has lost three straight after a 6-0-1 stretch.

Aho, who had a goal disallowed in the second period, pulled the Hurricanes to 4-3 as he scored from the left side on a rebound of Nino Niederreiter's shot at 1:40 of the third. It was Aho's 22nd of the season.

Carolina pressed for the tying goal, but couldn't get anything through the Rangers' tight defense.

Strome then restored New York's two-goal lead with 6:11 left, converting Panarin's centering pass from the left corner for his eighth.

After falling behind early, the Rangers tied the score late in the first period and then had the first three goals in the second.

Kreider put the Rangers ahead 2-1 just 1:27 into the second period. Zibanejad brought the puck up the right side on a rush, faked a shot to draw Reimer to his side, and then passed across to Kreider on the left side and he fired it into the open side of the goal before the goalie could slide over. It was Kreider's 11th.

Aho appeared to tie the score for Carolina about four minutes later with the Hurricanes on extended power-play time after a pair of overlapping penalties, but the Rangers challenged for offside on the play and the goal was disallowed after a review.

New York then scored to take a two-goal lead at 7:29. After a turnover by the Hurricanes, Filip Chytil brought the puck up the right side, went to the net and stopped when he didn't have an open shot. His attempted pass to the left through traffic in front, rebounded to Panarin on the left side and he put it in top shelf for his 21st.

Zibanejad got his second of the game — both on power plays — to give the Rangers a 4-1 lead as DeAngelo's shot from the right side was deflected into the air. It landed in front and Zibanejad quickly put it past Reimer for his 14th.

Pesce scored on a 2-on-1 rush, beating Lundqvist from the right side just inside the post for his fourth with 2:49 left in the second to pull the Hurricanes back within two.

The Hurricanes got on the scoreboard first as Wallmark fired a one-timer from the left circle off a pass by Teuvo Terravainen past Lundqvist for his seventh at 5:15 of the opening period.

Zibanejad tied the score with 3:29 left in the first as he got a pass from Kreider from behind the net and quickly fired it into the top right corner from the right side in front. It was the Rangers' first power-play goal in five games.

Strome nearly put the Rangers ahead with a little more than a minute remaining in the first, but his shot rang off the post

NOTES: Strome appeared in his 100th game with the Rangers since he was acquired from Edmonton on Nov. 16, 2018. ... D Marc Staal appeared in his 861st game, tying Jean Ratelle for sixth place on the Rangers' franchise list for non-goalies. ... New York improved to 12-0-2 when leading after two periods. ... The teams close their four-game season series Feb. 21 at Carolina. ... C Jordan Staal appeared in his 500th game with the Hurricanes, and the 931st for his career. ... Wallmark extended his point streak to five games with three goals and four assists in the stretch. ... Carolina has allowed at least one power-play goal in five straight games. ... Terravainen has at least one assist in six straight games. ... The Hurricanes lost for just the third time in 19 games when scoring first this season.

Rangers: At Toronto on Saturday night to open a stretch of four straight road games in Canada.