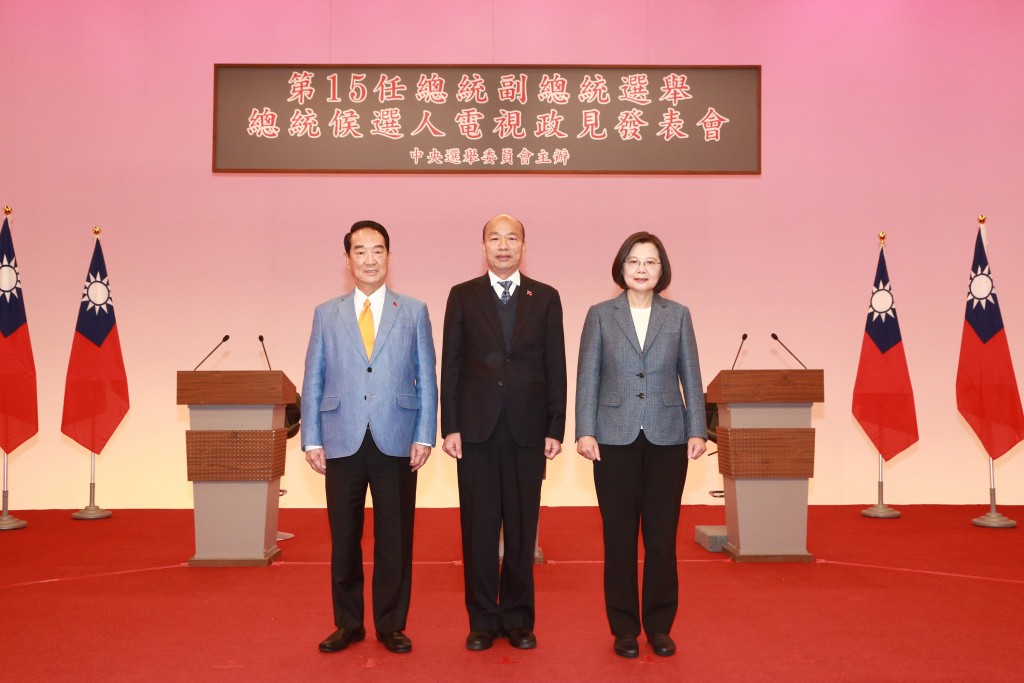 TAIPEI (Taiwan News) — The three rivals for next month’s presidential election focused on the economy and the government’s proposed Anti-Infiltration Act during their second round of policy presentations on TV Wednesday afternoon (Dec. 25).

The second live TV presentation opened with President Tsai defending her record on the economy.

“The world will not forget Taiwan,” she said, adding the country’s economy was stable despite international uncertainty. She said that wages were rising faster than the eight-year period before she came to power in 2016 and that the island’s economic growth was the fastest among the Four Asian Tigers, ahead of South Korea, Singapore, and Hong Kong.

Tsai rejected Han’s comparison of the Taiwanese economy to North Korea's. “Taiwan is moving forward with the wind over the ocean waves, while Han considers a bathtub as the ocean,” she said.

Han repeated his allegations of corruption and questioned Tsai's leadership, saying she had been surrounded and “hollowed out” by DPP factions.

Meanwhile, Soong expressed his opposition to the Anti-Infiltration Law proposed by the government, accusing Tsai of not listening to public opinion while trying to push through the proposal, which seeks to restrict the Chinese influence in Taiwan.

He continued on the theme during his second 10-minute address, cautioning the DPP against using “majority violence” to ram the law through the Legislative Yuan. Taiwan needs a president who resolves problems, not a “super president” who rules with the help of the media and netizens, Soong warned.

Tsai defended the Anti-Infiltration Act as something similar to what many other democratic nations were working on. China would be happy if the law were described as a form of martial law, Tsai said. The president also said her administration had laid the foundation for green energy, with wind energy expected to create 20,000 jobs. Restarting the fourth nuclear plant, as Han had proposed, was playing with lives, she claimed.

She also promised judicial reform, which would protect victims, safeguard the confidentiality of investigations, and introduce jury trials.

Han said that if he were elected president, he would set up a “Republic of China Sovereign Fund” worth NT$10 trillion (US$332 billion) and open free trade zones in Taichung and Kaohsiung while promoting bilingual education like Singapore.

PFP Chairman Soong presented himself as the most reliable choice in dealing with China. He also described the threats facing Taiwan, including the aging population, the nature of its industrial structure, and the widening gap between rich and poor. He concluded the 90-minute program by describing the main threat to Taiwan as the “extremism” of the two main parties.

The third and final TV presentation is scheduled for Friday (Dec. 27), with the only true debate featuring interactions between candidates and questions from journalists taking place Sunday (Dec. 29).