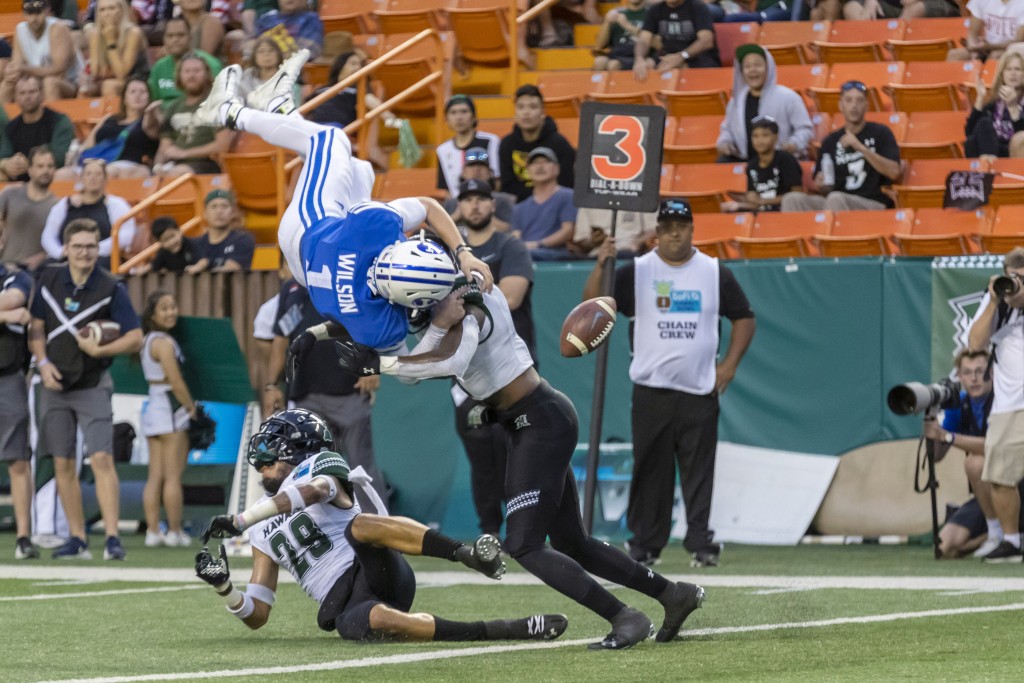 HONOLULU (AP) — Cole McDonald capped a stellar performance with a 24-yard touchdown pass to Nick Mardner with 1:17 remaining, and Hawaii beat BYU 38-34 on Tuesday night for the Warriors' first 10-win season since 2010.

McDonald threw for 493 yards and four touchdowns against a BYU defense that was allowing an average of 203.8 yards passing per game.

Still, it took a late rally for Hawaii to beat BYU for the first time since 2001 when both were part of the Western Athletic Conference. After leading 31-24 at halftime, the Cougars (7-6) shut out the Warriors until the final possession.

McDonald scrambled for 9 yards. He found Mardner behind the defense for a 38-yard pass that at least put Hawaii in range to tie the game. And then he hit Mardner on a post route, and he tumbled into the end zone as Aloha Stadium erupted for its home team, even though the Warriors (10-5) were technically the visiting team.

BYU wasted a solid game by Zach Wilson, whose father grew up in Hawaii. Wilson threw for 274 yards and ran for 72 yards and two short TDs to help the Cougars rally from a 10-point deficit in the first half.

BYU's last chance ended when Khoury Bethley intercepted Wilson for the second time, and the celebration was on.

McDonald finished 28 of 46, and he did most of his damage in the first half by throwing for 331 yards and three scores. Of the four touchdown drives, the shortest was 40 yards. That one followed Bethley's first interception. Two plays later, McDonald found Jared Smart on a post route with a perfectly thrown pass that made it 14-0.

Wilson brought the Cougars back, leading them on touchdown drives of 73, 75 and 75 yards, the last one ending on Micah Simon scoring on an 11-yard reverse.

BYU still leads the series 23-9. This was the first time the schools met in a bowl game.

Hawaii: McDonald used the middle of the field and was not afraid to go deep on a BYU defense that had been stubborn against the pass most of the year. He went over 4,000 yards passing for the season.

BYU: The Cougars had great balance with the run (231 yards) and pass (274 yards). But they were susceptible to the deep ball all game, and it cost them in the end.