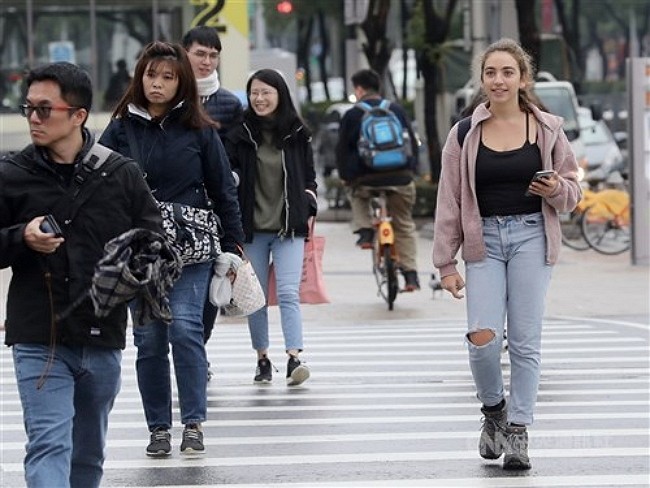 Taiwan will experience a warm Christmas Day Wednesday but a new northeasterly wind system that is on the way will send daytime temperatures lower by 5-7 degrees Celsius on Friday, according to the Central Weather Bureau (CWB).

The new weather system will start to affect northern Taiwan later Thursday, but its impact will be more apparent Friday, when daytime highs will fall to 18-20 degrees, the CWB said.

Central and southern Taiwan will not be affected by the weather system, however, with daytime highs reaching 26-28 degrees, the CWB forecast.

On Wednesday, the weather around Taiwan is expected to remain stable, with daytime highs of 25 degrees in northern Taiwan and 28-30 degrees in central and southern Taiwan, the CWB said.

Most of Taiwan will see partly cloudy or sunny skies, with sporadic showers only a possibility in mountainous areas, but the CWB did warn of a day-night temperature gap of as many as 10 degrees, particularly in central and southern Taiwan.

In addition, the CWB said, big waves are possible in northern and eastern coastal areas, as well as the Hengchun Peninsula in the south Wednesday due to the influence of Typhoon Phanfone.

As of 8 a.m., the typhoon was located around 1,140 kilometers south of Eluanbi at the southernmost tip of Taiwan, and heading to the South China Sea.

The CWB said that while the storm is unlikely to directly affect Taiwan, it is expected to bring wet air to the island over the weekend, adding to the possibility of rainfall.

The Air Quality Index (AQI) flashed an "orange alert" for some parts of Kaohsiung and Pingtung in the south, indicating unhealthy air for sensitive groups.

Elsewhere, air quality was largely rated good to fair, according to the EPA.