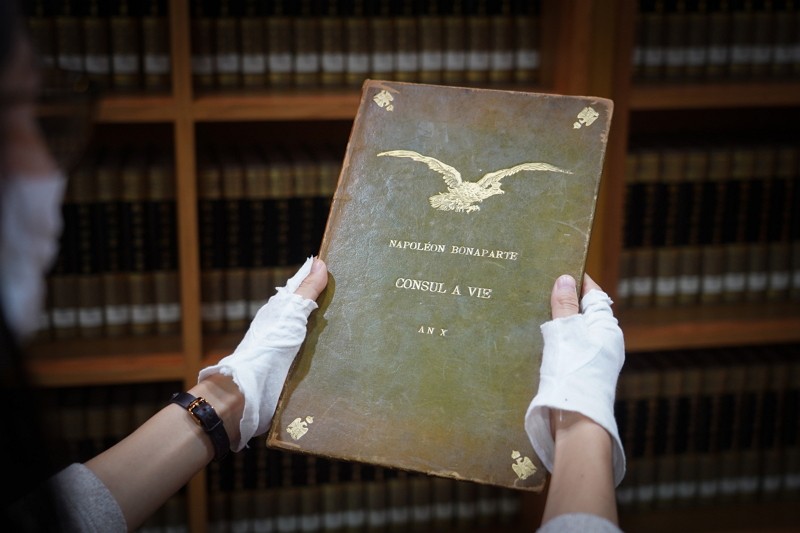 Having been held in private hands for nearly two centuries, an original typewritten document published in 1802 recording the results of the French constitutional referendum which made Napoléon Bonaparte First Consul for life can now be viewed at National Central Library (NCL) in Taipei.

The document, which the private collector believes to be the only one of its kind in the world, was recently presented to the library for safekeeping. It is part of a larger collection from a Chinese family that settled in Taiwan and has collected European antique books and documents since the 19th century.

Although the library has not confirmed whether the document is the sole remaining historical document detailing the first step taken by Napoléon to become the Emperor of the French, "in terms of such documents, normally there would not be more than one," NCL editor Tu Li-chung (杜立中) told CNA Tuesday.

"The document was signed by then-minister of the interior of France and mounted by Napoléon himself, therefore its cover carries the Napoléon family crest," Jason Dou from the family was quoted as saying by Taipei-based CommonWealth Magazine in an interview published Monday.

According to the NCL, apart from the priceless document, the collection, also known as "Cheng Ting Tang (澄定堂)," after the name of the family study, has presented the library with 49 volumes of antique European books -- most of them first edition prints -- for safekeeping since 2018.

These include an 1843-edition of "A Christmas Carol" by Charles Dickens, an 1871 copy of "The Descent of Man and Selection in Relation to Sex" by Charles Darwin, and a 1620 copy of "Novum Organum Scientiarum" by Francis Bacon.

In the "Cheng Ting Tang" collection, the first edition of "I Quattro Libri Dell'architettura," an architecture book authored by Italian architect Palladio published in 1570 with 218 wood carving illustrations, could be classified as an iconic print, the library added.

As opposed to a direct donation, the practice of having the works kept at the library means the original collector can have the collection returned at any time, Lu Tzu-ling (呂姿玲) of the NCL told CNA.

However, the library will be able to put the valuable works on display, allow local scholars to conduct research with them and possibly attract foreign scholars to visit Taiwan, she said.

The library, which has 4,400 antique volumes of European books and documents that are 100 years old or older, has pledged to keep these valuable works in an environment that ensures they are well preserved.

NCL Director-General Tseng Shu-hsien (曾淑賢) said the works will also be scanned so they can be read online by members of the public and researchers.