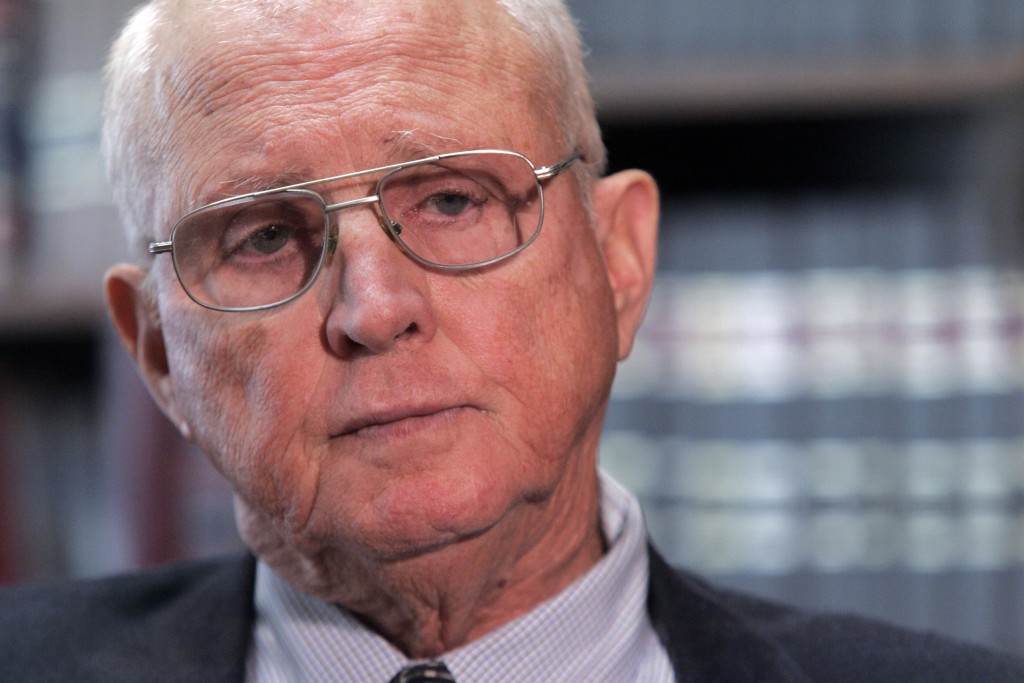 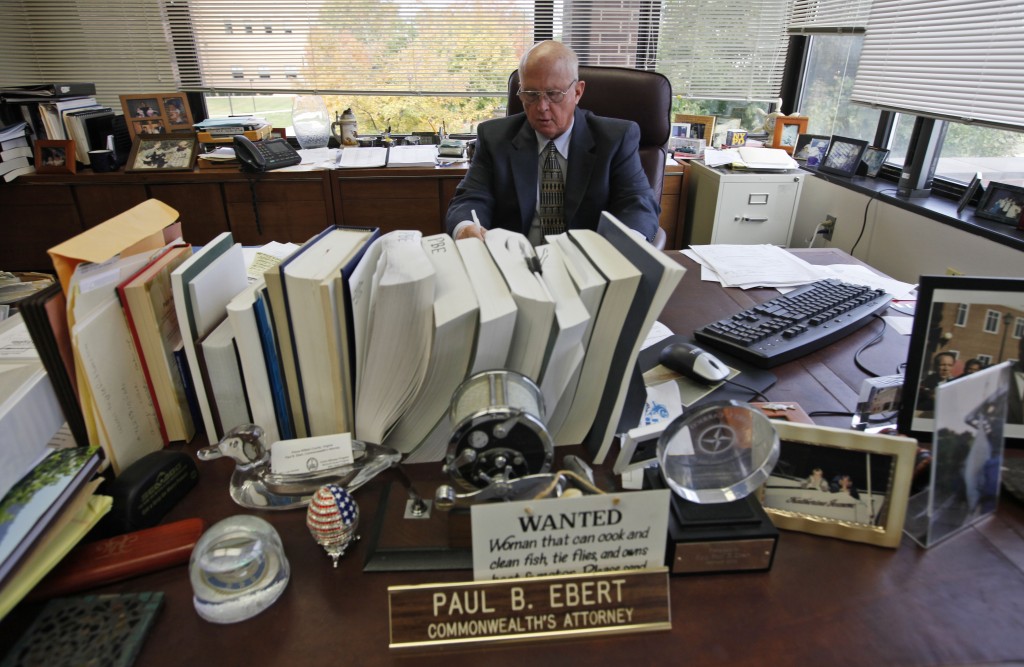 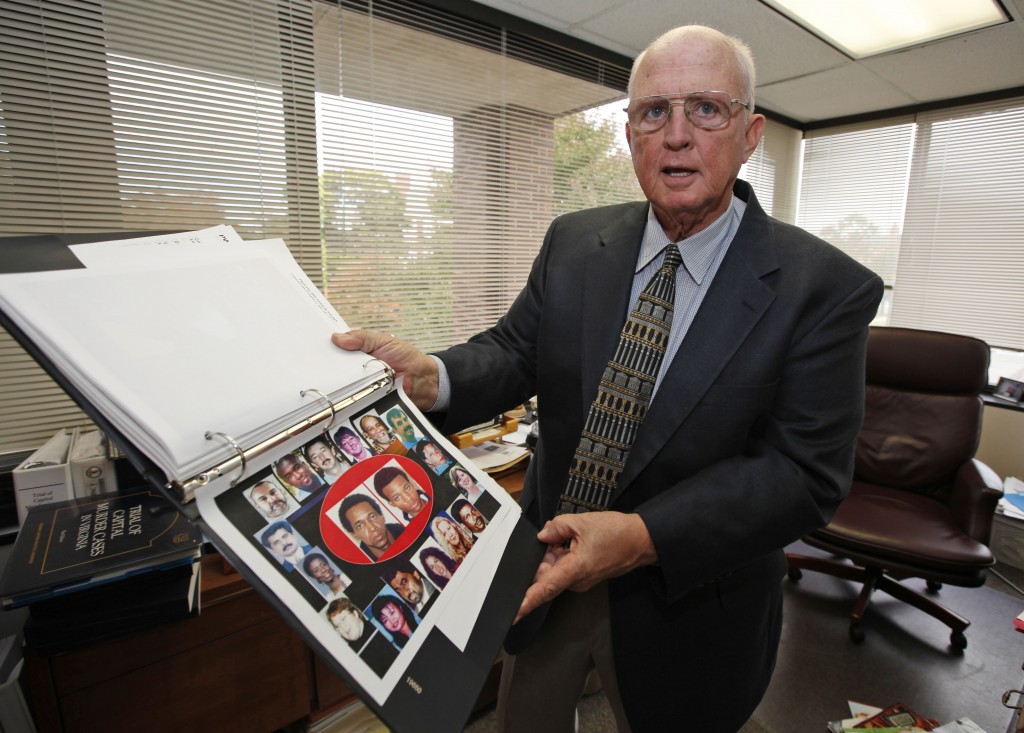 MANASSAS, Va. (AP) — Prosecutor Paul Ebert is a man of few words, but in 52 years before juries and judges he learned to use those words to great effect. He has a particularly pithy way of summing up the two cases that came to define his career: the sniper and the snipper.

The snipper is Lorena Bobbitt, who in 1993 cut off husband John Wayne Bobbitt's penis and tossed it out her car window. The case generated worldwide headlines, coarse jokes and a serious debate about domestic violence after Bobbitt said she attacked her husband in response to repeated rapes and sexual assaults. Both were put on trial; neither was convicted.

The sniper is John Allen Muhammad, who in 2002 used a rifle, a beat-up Chevy Caprice and a teenager who idolized him, Lee Boyd Malvo, to launch a series of terrifying sniper attacks in Maryland, the District of Columbia and Virginia that left 10 people dead over three weeks. Muhammad was executed in 2009.

Ebert, Virginia's longest-serving prosecutor, is retiring at the end of the year, having reluctantly decided against running for reelection after developing Parkinson's disease. He was the youngest commonwealth's attorney in Virginia history when sworn in in 1968. He's leaving office as the oldest.

Ebert is being replaced by Amy Ashworth, a former prosecutor in his office who ran on a reform agenda promising significant change. Throughout northern Virginia, longtime prosecutors are being replaced with newcomers, some of whom have never prosecuted a case. All ran on reform agendas that promised a break from the tough-on-crime reputation Ebert epitomized.

“I've seen the pendulum swing back and forth," Ebert, 82, said about the change in public sentiment. But he said the justice system fails if prosecutors forget their role.

“We have an adversarial system. We bump heads, and out of that fight comes justice,” he said.

Ashworth, whom Ebert declined to endorse, said she has a list of about 130 potential changes she's kept over the years. Some are inconsequential, like better coffee in the office. Others are significant, like allowing defense lawyers full access to case evidence.

She thinks the office needs a fresh approach and voters are ready to embrace criminal-justice reform.

Still, she said she faced a frequent question when she knocked on doors while campaigning: Are you going to be as tough on crime as Paul Ebert?

“And I would say, ‘Let's talk about that — what do you mean by tough?'" Ashworth said. After some discussion, she said, she and the prospective voter would come to a meeting of the minds. "What everyone wants is that people are treated fairly."

Ebert's reputation took a hit in 2012 over his prosecution of Justin Wolfe, a teenage drug dealer sentenced to death for plotting the murder of his supplier over a debt. A federal court granted Wolfe a last-minute reprieve and an appellate court accused Ebert of “conduct abhorrent to the judicial process” for withholding evidence about the credibility of the man who testified he shot and killed the supplier at Wolfe's request.

Richard Conway, who served as one of Ebert's top deputies for more than three decades and is retiring now that Ebert is leaving, said Ebert's greatest strength as a prosecutor is his people skills. He speaks with a sometimes mumbling drawl but connected to juries by appealing to their common sense.

Often in a trial's closing arguments, Ebert would nearly dare juries to acquit a defendant, saying words to the effect of “If you believe the defendant's story, go ahead and let him walk free.”

Conway said the tactic sometimes scared him to death, for fear that a jury would take him up on his offer.

Although Ebert will be remembered for the high-profile trials, Conway said, his “everyday acts of mercy that no one hears about" went unnoticed.

“Paul has been one not to have any rigid rules, other than to do what's right, to get the result that's just for the victim and the defendant,” Conway said.

As Ebert prepares to leave office, he says he's not fully prepared to retire. He might do some civil work, which he said he was pretty good at back in the '60s, before becoming a prosecutor.

As for defending clients in criminal cases, though, he says no: “I don't think I could put my heart in it.”