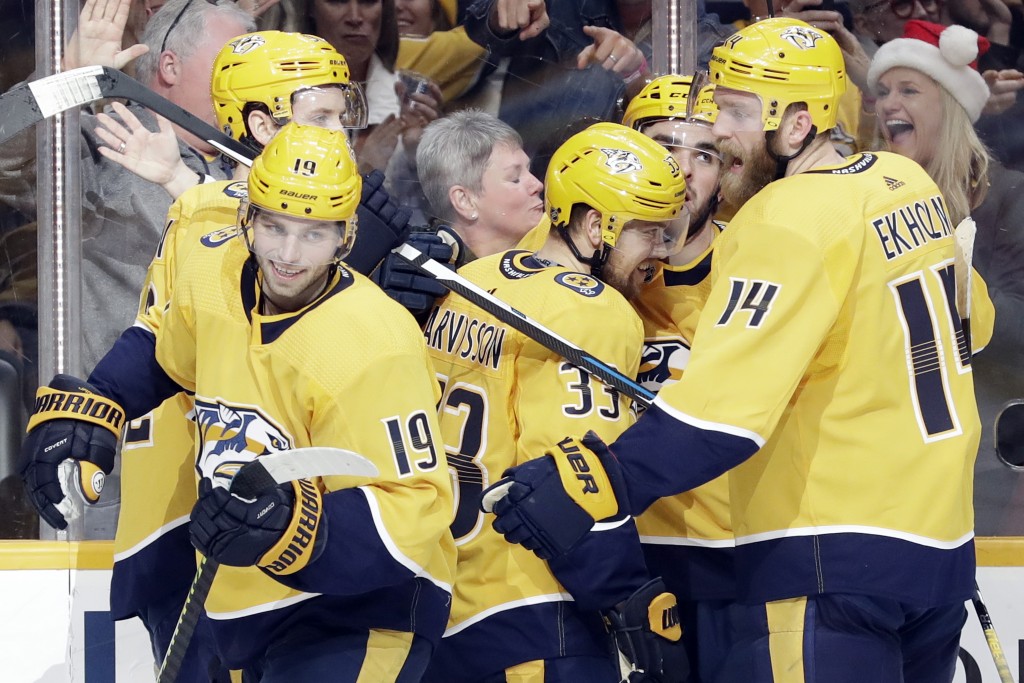 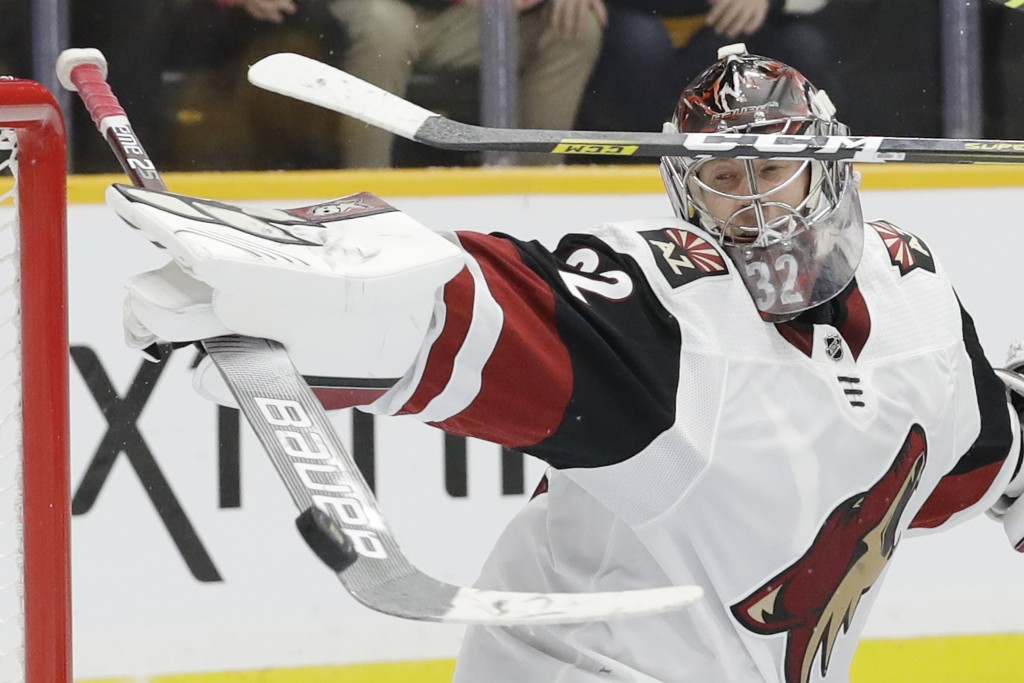 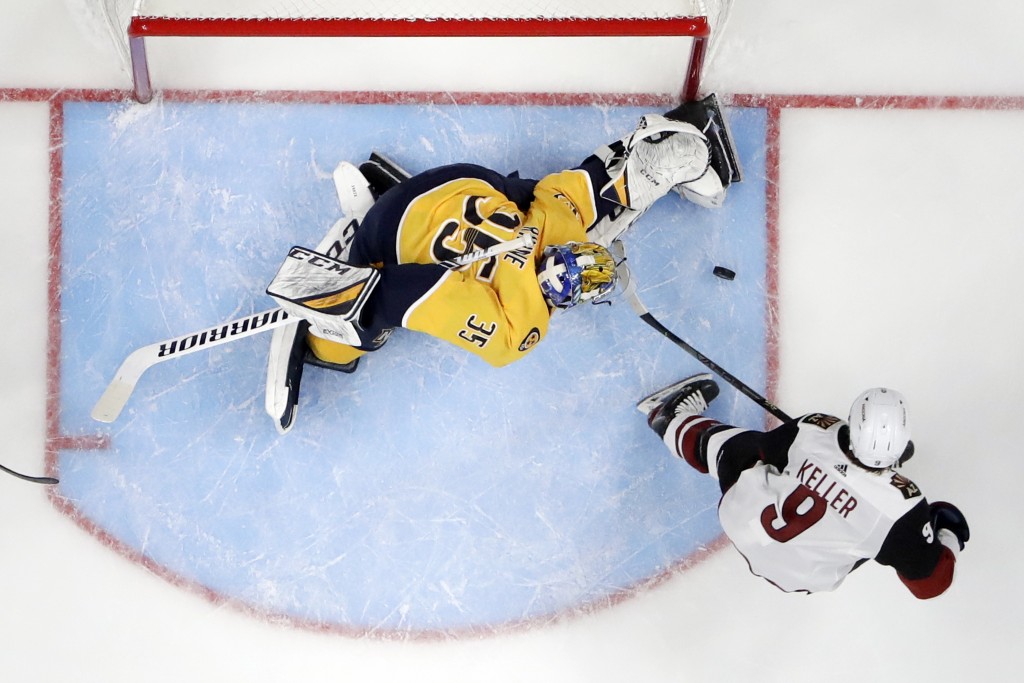 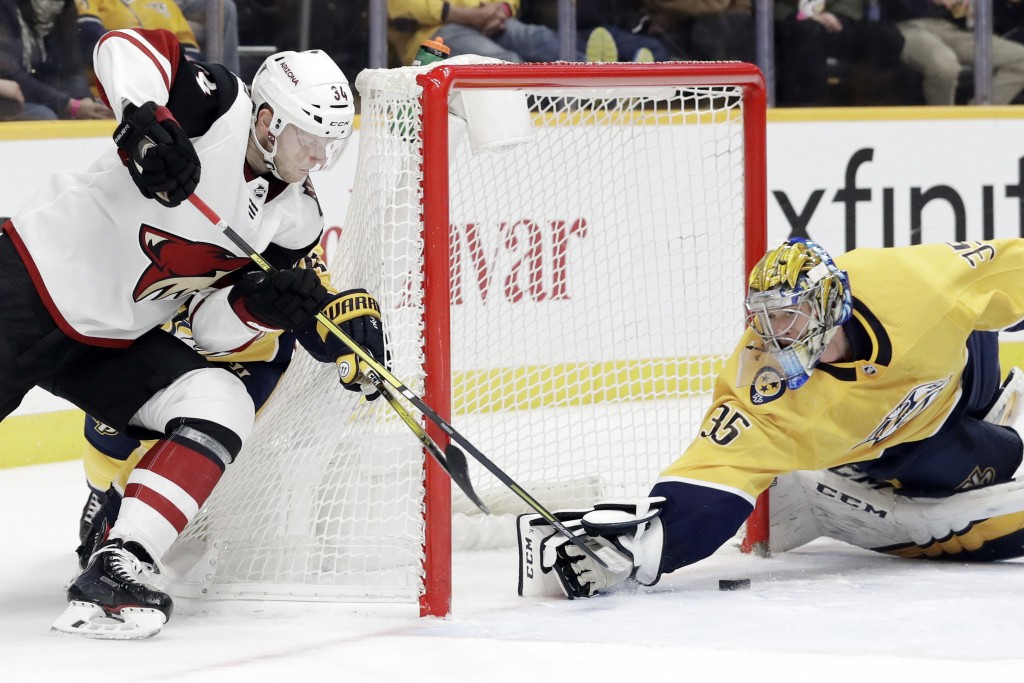 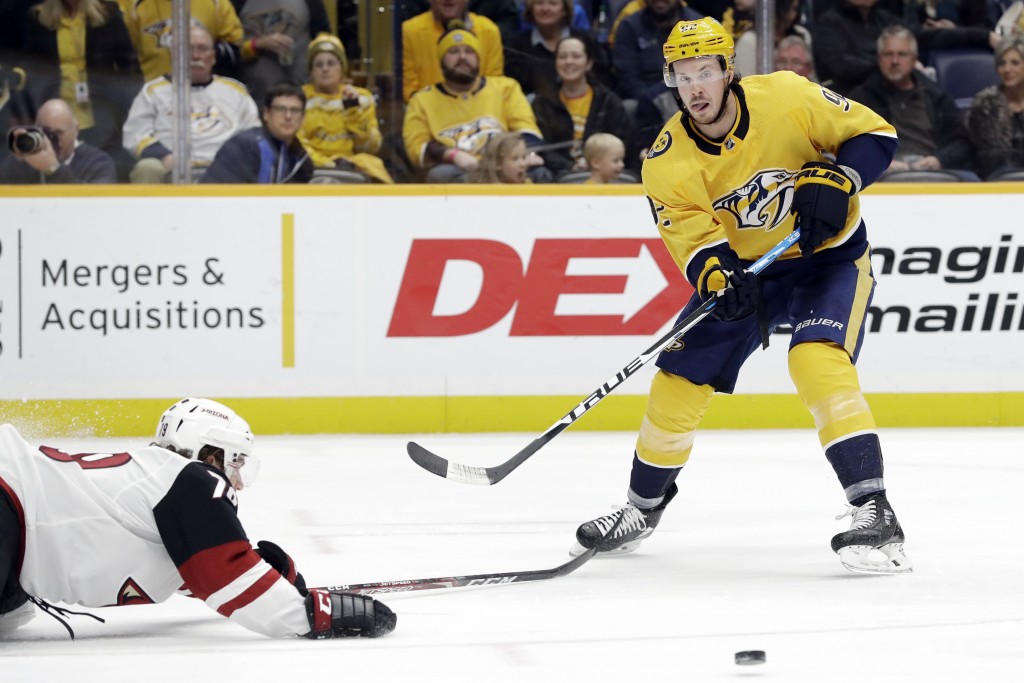 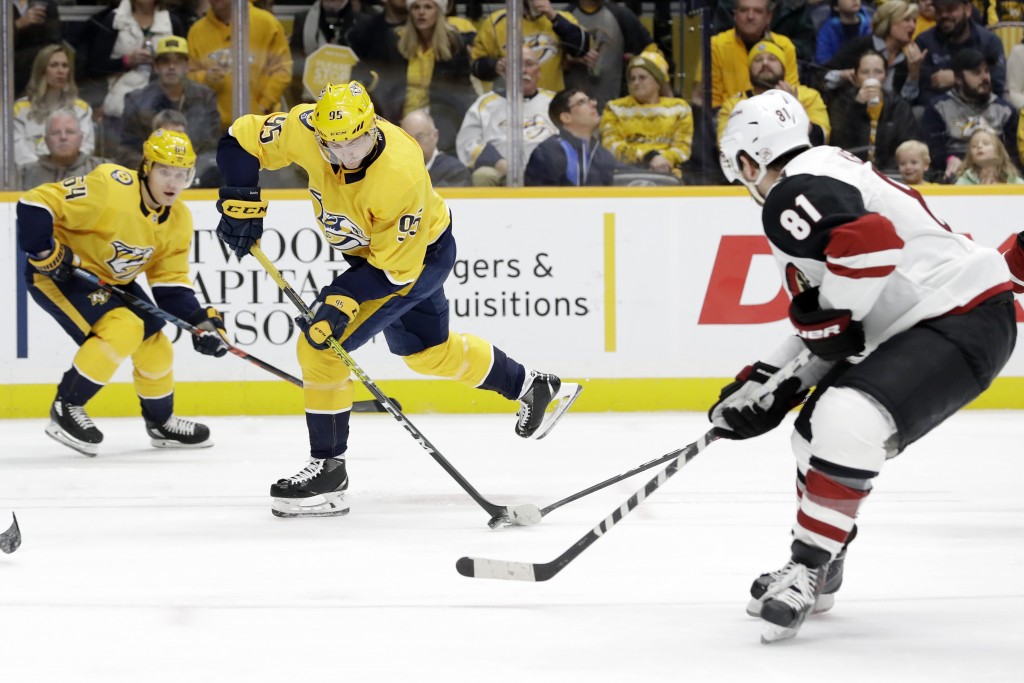 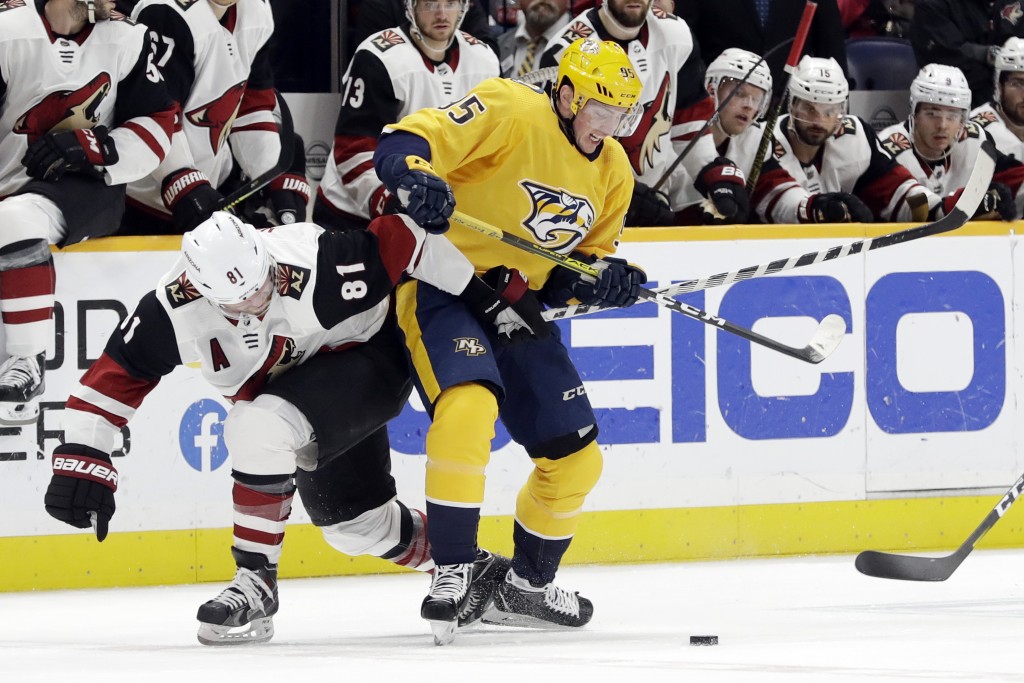 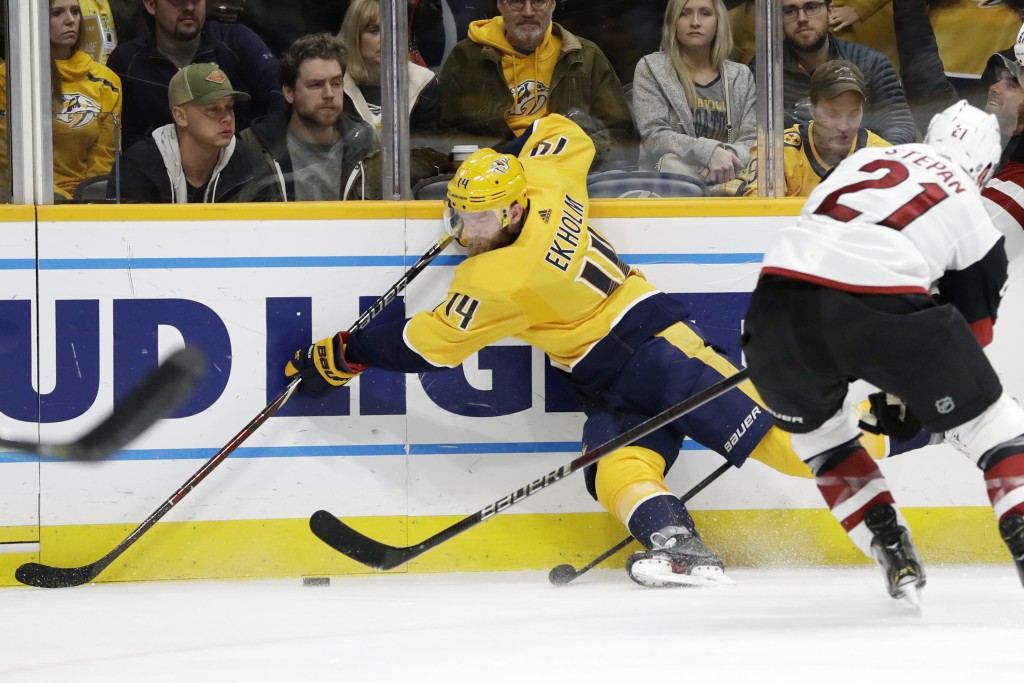 NASHVILLE, Tenn. (AP) — Roman Josi had a goal and an assist, Pekka Rinne made 26 saves and the Nashville Predators beat the Arizona Coyotes 3-2 on Monday night.

Filip Forsberg and Viktor Arvidsson also scored for the Predators, who have won four of five.

Josi put the Predators up 3-1 at 9:56 of the third period with a wrist shot from the left point.

Chychrun drew the Coyotes within one 37 seconds later, but Arizona could not tie it.

Josi, who earlier Monday was selected the NHL’s Second Star of the Week for last week, extended his career-best goal streak to five games.

Forsberg opened the scoring at 18:08 of the first.

After goaltender Antti Raanta turned aside Nashville’s first 21 shots in the period, Forsberg was finally able to put one in when Josi's shot hit traffic in front and the puck bounced to Forsberg on the left side. With his feet below the goal line, Forsberg quickly kicked the puck to his forehand and slipped a slick wrist shot between Raanta and the near post.

Forsberg and Josi are tied for the team lead with 14 goals.

The Predators outshot Arizona 22-5 in the first. Prior to Forsberg’s goal, Raanta denied Rocco Grimaldi and then two backhand attempts by Matt Duchene in a five-second span.

Arvidsson made it 2-0 at 7:55 of the second when his long slap shot from the right side hit Raanta in the mask and then trickled across the goal line for his seventh of the season.

Playing in his second game since missing 12 after being cross-checked by St. Louis defenseman Robert Bortuzzo on Nov. 23, Arvidsson scored his first goal since Nov. 2.

Crouse halved the Nashville lead at 18:07 of the second.

After taking a pass from Nick Schmaltz on the right side, Crouse skated into the right circle and slipped a backhand by Rinne.

NOTES: Josi became the first defenseman in Nashville history to score in five consecutive games. ... Predators C Colin Blackwell assisted on Josi’s goal for his first NHL point. ... Predators LW Austin Watson was a healthy scratch for the second straight game. ... Schmaltz has assists in four consecutive games, totaling seven during that span. ... The Coyotes have not allowed a power-play goal in their last five games.