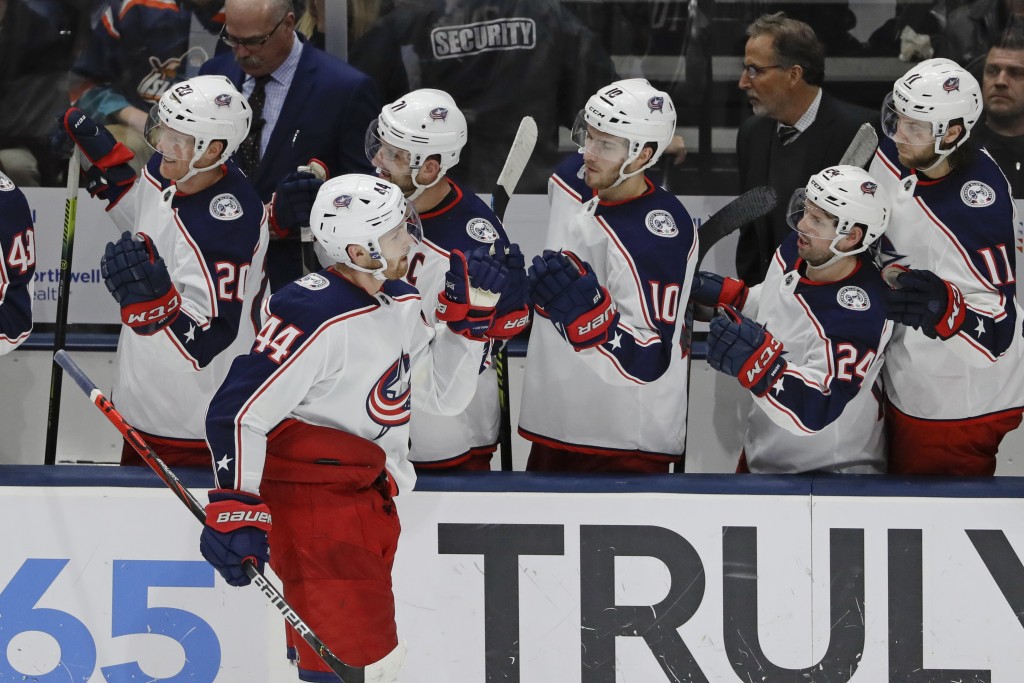 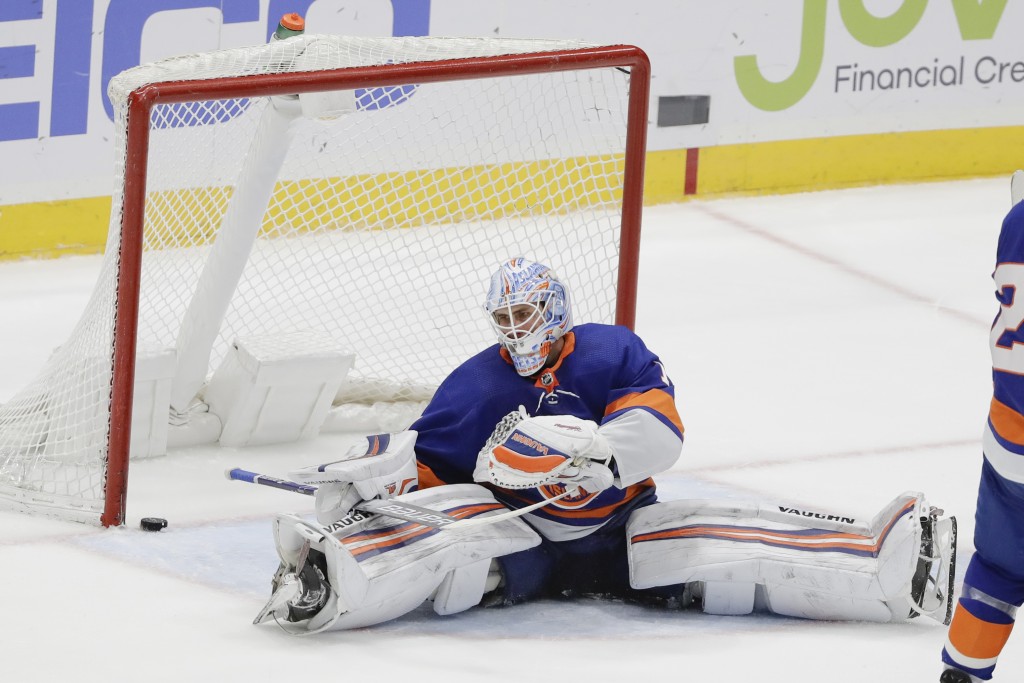 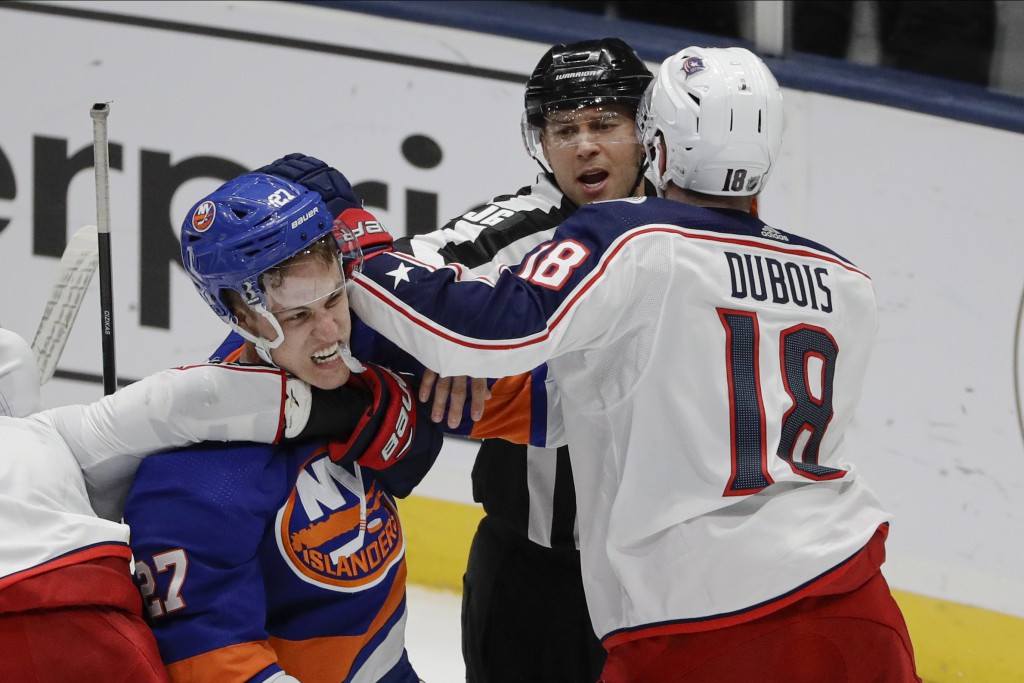 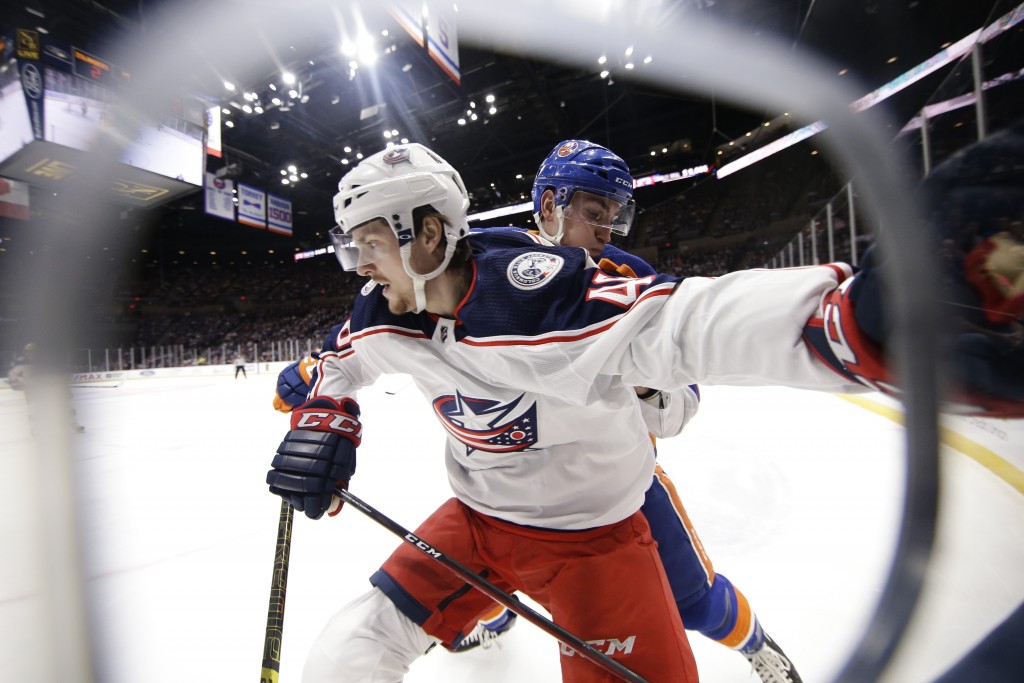 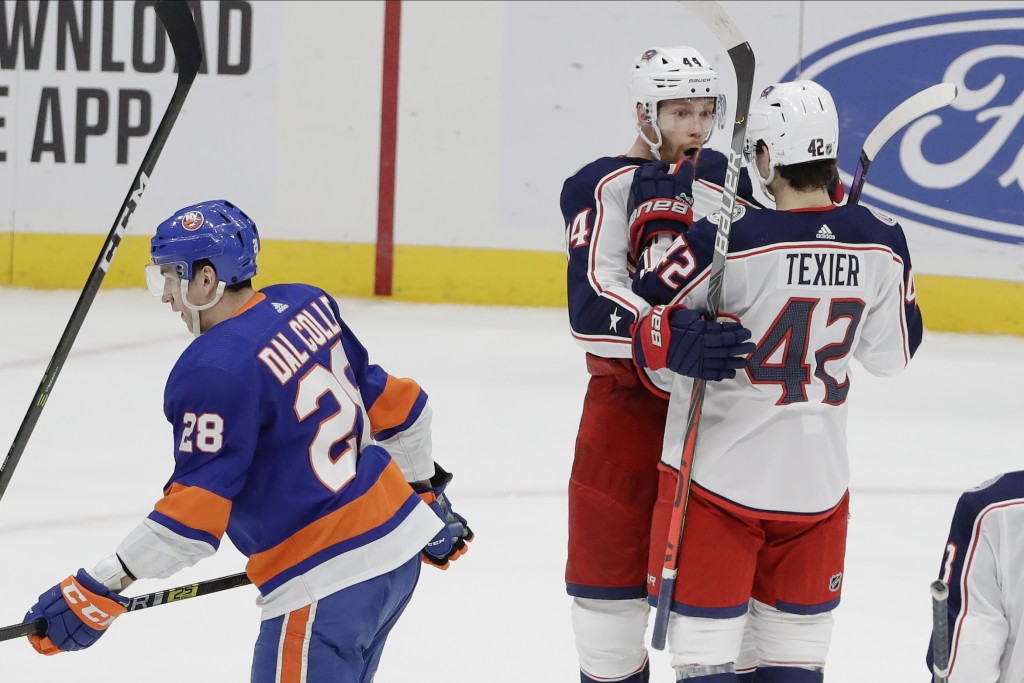 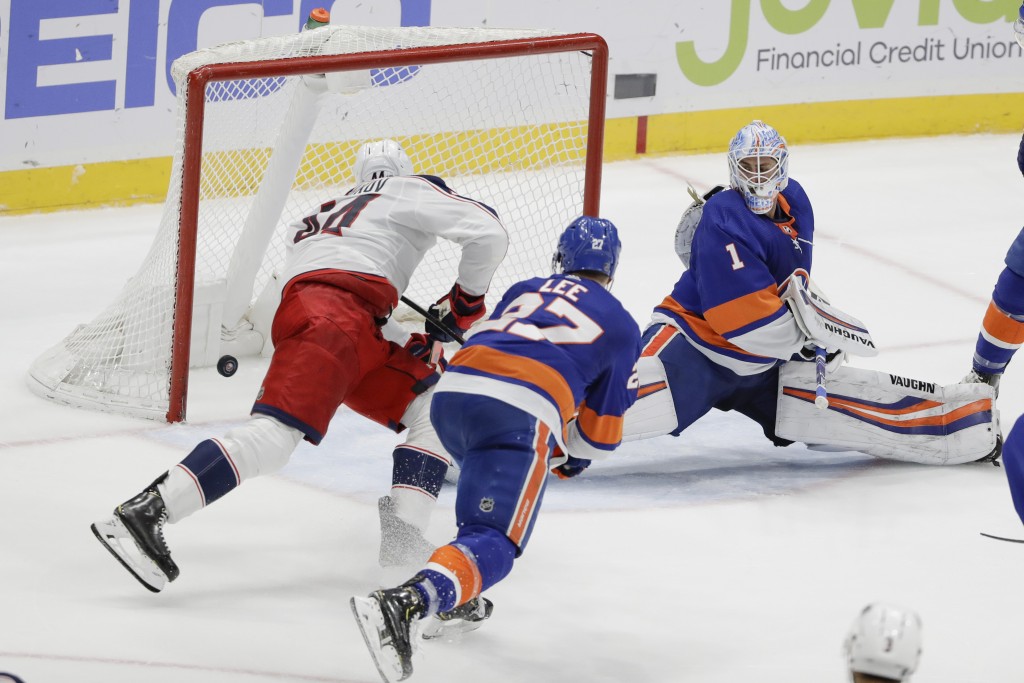 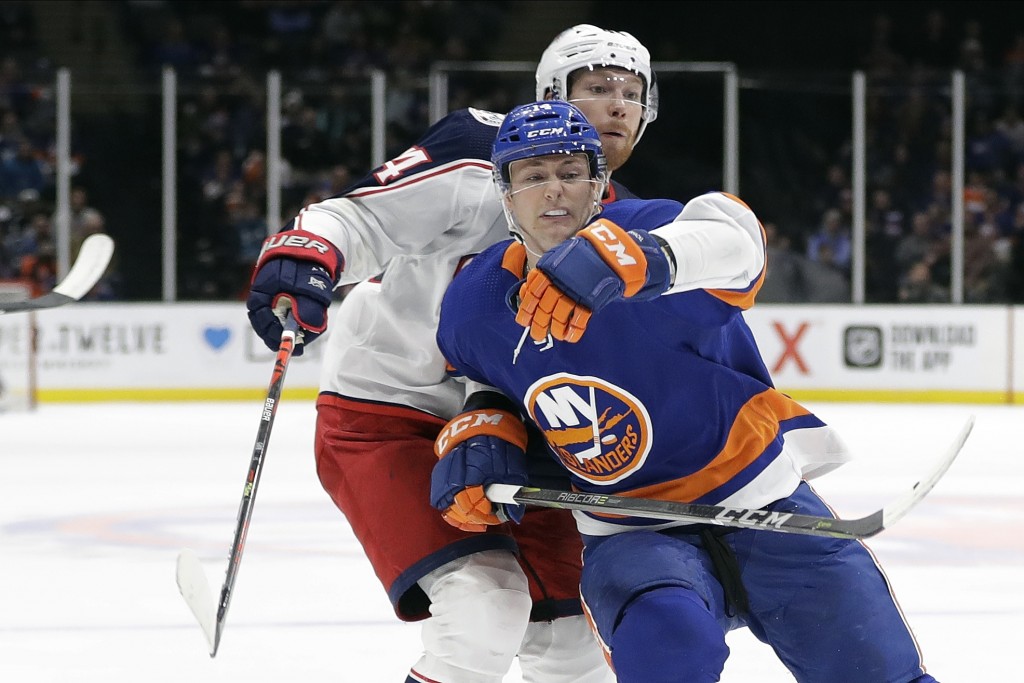 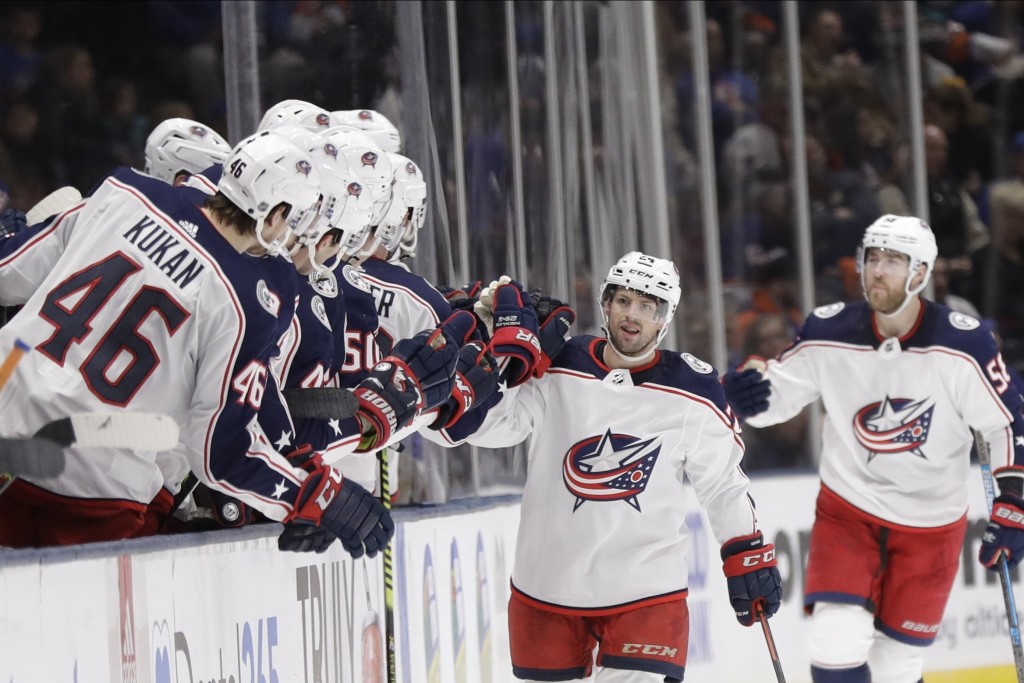 The defenseman swiped a backhand past Islanders netminder Thomas Griess at 16:31 for his fourth goal of the season, with assists by Alexandre Texier and Pierre-Luc Dubois. Columbus improved to 6-0-2 in its last eight games as Joonas Korpisalo made 35 saves for the win.

Anders Lee and Mathew Barzal scored for the Islanders, who lost their third consecutive game at Nassau Coliseum.

Korpisalo made a spectacular save on Lee at the eight-minute mark of the third period on a power play, denying him on the doorstep. Korpisalo also stopped Casey Cizikas on a short-handed breakaway later in the third.

Lee opened the scoring at 6:17 of the first when he snapped a shot past Korpisalo. Barzal and Jordan Eberle assisted on Lee’s 11th goal of the season. Lee has five goals and six assists in the past 11 games, and 16 points in 25 career games against Columbus.

Stenlund tied it with a power-play goal at 6:18 of the second. With Islanders defenseman Johnny Boychuk off for elbowing, Stenlund rifled the puck past Greiss for his second goal this season. Blue Jackets defenseman Zach Werenski assisted.

The 23-year-old Swedish forward was playing his ninth NHL game. He scored his first career goal last Tuesday against Detroit.

Gerbe, recalled from AHL Cleveland on Sunday to replace injured Oliver Bjorkstrand, put the Blue Jackets ahead 2-1 at 9:34 of the second. The 32-year-old Gerbe backhanded the puck over Greiss’ shoulder from the left circle near the crease for his first NHL goal since the 2015-16 season when he was playing for Carolina.

Bjorkstrand is out four to six weeks after sustaining a rib injury/oblique strain against the Devils on Saturday.

Barzal tied it 2-all at 13:40 of the second when he slid the puck past Korpisalo on a wraparound for his team-leading 16th goal. Boychuk and Eberle had assists.

NOTES: Blue Jackets coach John Tortorella tied Jacques Martin for 13th on the career list with 1,294 games coached. … The teams complete their four-game season series March 30 in Columbus. … Islanders forward Andrew Ladd played his first NHL game since March 24 when he tore his left ACL. The 34-year-old left wing had played 19 games for AHL Bridgeport this season, with seven goals and two assists. Ladd signed a seven-year, $38.5 million free-agent contract with the Islanders in July 2016 and had 23 goals during his first season with the team and 12 the following year. Hampered by knee issues last season, he scored only three times in 26 games. ... The Islanders scratched defenseman Scott Mayfield (illness) and forwards Ross Johnston and Leo Komarov. … The Islanders were also without Cal Clutterbuck, who needed surgery after getting a serious cut on his left wrist against the Bruins last Thursday night. … The Blue Jackets scratched forwards Sonny Milano and Cam Atkinson, plus defenseman Gabriel Carlsson.

Blue Jackets: At the Washington Capitals on Friday night.

Islanders: At the Chicago Blackhawks on Friday night.