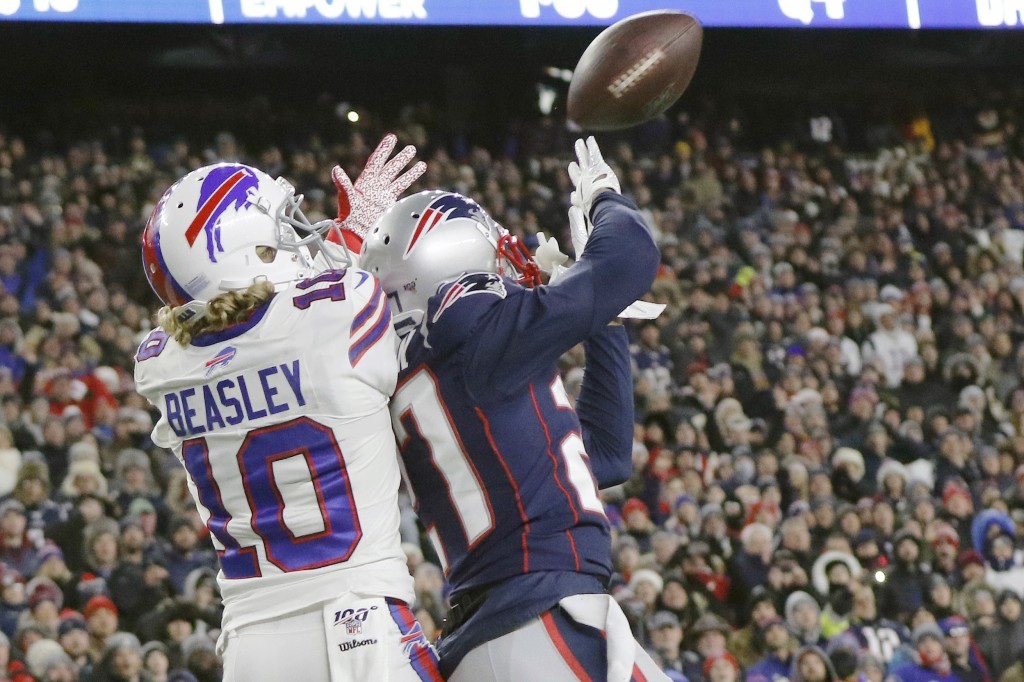 ORCHARD PARK, NY. (AP) — The Bills lost again to the Patriots on Saturday, 24-17. They have never beaten Tom Brady in Foxborough in a game that mattered to the Pats. New England wrapped up its 11th consecutive AFC East title and has the inside track on a first-round bye.

The difference is that for the first time in 20 years, the Bills were already in the playoffs with two games left in the regular season. They’re locked into the fifth seed and will go on the road for a wild-card game in two weeks, most likely at the Texans. They’ll have the luxury of resting players in the finale against the Jets.

The Bills have demonstrated their worthiness to the nation in a four-week run of games before a national TV audience. Imagine how dangerous they’ll be in the playoffs if they can figure out a way to get off to a fast start on offense.

For the seventh straight game, the Bills failed to score a touchdown in the first quarter. They scored points in the first quarter for the only time in their five losses — mainly because they ran back a fumble to the Patriots 31 on the game’s opening possession and settled for a field goal.

Allen needs to get into a rhythm earlier if the Bills want to win in the playoffs, and he knows it.

“Whether it’s eagerness or anxiousness or just pregame jitters, I’ve got to find a way to get rid of that,” Allen said of his slow starts. “Whether it’s throwing more pregame or throwing more right before the game when I’m on the sidelines, just try to get in tune.”

Allen has been inconsistent in his two years as the franchise QB. But when he’s in a rhythm, he can lift his team. He made some of his best throws of the season Saturday, including a 33-yard pass to Dawson Knox to set up Buffalo’s first TD just before the half, and a 53-yard TD strike to John Brown in the third quarter. It was Brown’s first catch over 40 yards in 2019.

So despite another in a long chronicle of losses to their AFC East tormentors, the Bills showed encouraging signs in defeat. Playoffs or not, the main objective was seeing significant development in Allen’s game, and the arrow is pointing up.

Now, if he could only start faster.

“That’s going to come with reps and playing in games and playing in big-time games like this,” he said. “You couldn’t ask for a better situation, playing for an AFC East division title in December with two games left, to give yourself a chance.”

The Bills didn’t turn over the ball for the seventh time in 15 games. They have six turnovers in their last 11 games after having 10 in the first four outings. Last year, they were tied for second in the league in giveaways.

The Bills, who entered the game tied for eighth in the NFL with 42 sacks and had 20 in their previous five games, didn’t take down Brady once. They’d gone sackless once before this season — in the Week 4 loss to the Patriots.

Cole Beasley had seven catches for 108 yards against the Pats, his second 100-yard game in four weeks and the third-most yards in his career. He had 110 yards in the Thanksgiving win over Dallas. His career high is 112.

Frank Gore, the NFL’s third all-time leading rusher, didn’t have a carry for the first time in his 15-year career, a span of 225 regular-season games. Gore has carried 65 times for just 151 yards over his past eight games.

The Patriots had 414 yards, the most the Bills have allowed in a loss this season. They gave up 426 to Dallas in a win on Thanksgiving.

The Bills host the Jets in the regular-season finale at New Era Field next Sunday. A win would give them 11 for the first time since 1999.