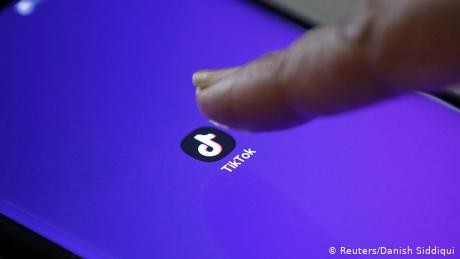 Feroza Aziz is using an eyelash curler and explaining how to do your lashes in her make-up tutorial. But only for 8 seconds. After that, her video calls on viewers to educate themselves on how the Chinese government is detaining millions of Muslim Uighurs in so-called re-education camps.

The video quickly went viral on TikTok and shortly after it happened, Aziz was blocked from accessing her account, she told the Washington Post.

Speaking to DW, a TikTok spokesperson said: "The previous account and associated device were banned after she posted a video of Osama Bin Laden, which is a violation of TikTok’s ban on content that includes imagery related to terrorist organizations." TikTok did not clarify why Aziz was blocked from her present account for content that was uploaded to a previous account that had already been deleted.

The spokesperson said Aziz's "new account and its videos, including the eyelash video in question, were not affected and continue to receive views." The video has gathered 1.5 million views on the platform, over 6,000 comments, 36,600 shares and half a million likes. On Twitter, multiple versions of it have got nearly four million views.

DW requested a copy of the alleged bin Laden video for independent verification of its content, which TikTok declined to share.

On Thursday, TikTok announced it had lifted the ban on Aziz's account. The social network company continued to insist the ban was related to a past incident and not the eyelash video, which was taken down for nearly an hour on Thursday. TikTok blamed a "human moderation error" for the video's removal.

A DW analysis of the account shows Feroza Aziz mentioning that she has been banned before. Her current account has older videos that appear to be of a previous account, with a similar screen name.

TikTok does not put time stamps on its videos, so it is impossible to know exactly when Aziz’s current account was created. However, comments on TikTok posts do have an indication of the day they were posted. On Aziz’s current account, there are comments dating as far back as November 15, indicating that the account has been up and accessible to her for at least 12 days.

It appears that Aziz had been able to access it for that time, during which she posted 17 videos, apparently until the videos criticizing the Chinese camps went viral. It remains unclear why her device wasn’t blocked from accessing the platform when her previous account, with the Osama bin Laden video, was deleted.

Reporting by The Guardian and German media outlet NetzPolitik show that TikTok’s internal guidelines instruct its content moderators to censor topics the Chinese government deems unsuitable, such as mentions of Tiananmen Square or the Hong Kong protests. TikTok executives have denied the claims, but extensive research has shown that the Chinese censors don't necessarily always remove problematic content. Instead, they often block its distribution, preventing the posts from being widely consumed and rendering them all but invisible.

DW has reached out to Feroza Aziz for comment.