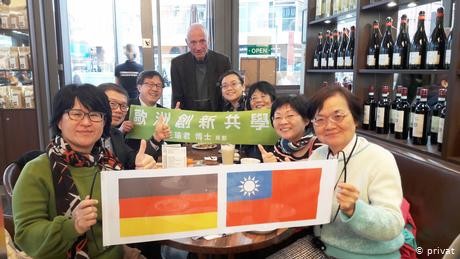 With transparent institutions, free elections and a free market economy, Taiwan positions itself as an island of democracy off the coast of an authoritarian People's Republic of China (PRC).

Germany is one of Taiwan's most important European partners, with a robust trade relationship and strong bonds between companies and institutions. But Berlin does not have any formal diplomatic relations with Taipei.

However, after a petition started by a German pensioner received more than 50,000 signatures in only a few weeks, the German government will now have to explain why it doesn't recognize Taiwan in a hearing set for Monday, December 9.

Michael Kreuzberg is a retired German marine biologist from the eastern city of Rostock. After he visited Taiwan in 2018, he was "inspired by the people there fighting for their democracy."

Kreuzberg said he lived under a dictatorship in the former communist East Germany, and feels empathy for Taiwan.

"I know what these dictatorships are like. I have been angry for a long time that Taiwan is not recognized by the West, and meanwhile all Western countries curry favor with a regime like that in the People's Republic of China, which cannot be considered a democracy," Kreuzberg told DW.

To commemorate the 30th anniversary of the Tiananmen Square massacre in June 2019, Kreuzberg decided to make a statement for "small, courageous Taiwan."

He filed a petition with the German Parliament, the Bundestag, calling for Germany to establish formal diplomatic relations with Taiwan.

According to German law, everyone has the right to submit a petition with requests or complaints to the parliamentary petition committee, which then decides whether to publish the petition for the public to consider supporting. If a petition is published, and then receives over 50,000 signatures, it is discussed publicly during one of several annual meetings of the petition committee.

In Kreuzberg's case, the committee rejected his request and said it would not publish the petition on its website.

According to a copy of the rejection letter seen by DW, the German Foreign Ministry advised the committee not to publish Kreuzberg's petition because it risked contradicting Germany's "one China policy" and doing "damage to international relations or intercultural dialogue" with China.

From grassroots to geopolitics

Not to be deterred, Kreuzberg appealed the decision, arguing that there were already China-critical essays on the government website. He turned to the center-left Green party for help.

A few weeks later, Kreuzberg received notice that the petition committee would publish the Taiwan petition.

"I told a few friends about it who signed it, and I thought if I can get a few hundred signatures, then it would be a success," said Kreuzberg. "I never counted on actually reaching the minimum level of votes for a hearing," he said.

But within two weeks, the petition received over 30,000 signatures. Two weeks later, it cracked the 50,000 mark — enough to require the petition committee to publicly debate Kreuzberg's request for diplomatic recognition of Taiwan during its next session on December 9.

Getting the German government to publicly discuss diplomatic recognition of Taiwan was an unexpected victory for Kreuzberg, and it caught the attention of the head of Taipei's Representative Office in Berlin, Jhy-Wey Shieh.

Read more: Is Trump's commitment to 'one China' policy a thaw in bilateral ties?

Shieh said it was remarkable that a German citizen, "out of his own desire for justice" decided to stand up for Taiwan, which is an "established democracy that is being threatened."

"It wasn't our initiative. It was started by a former citizen of East Germany who simply did not want to accept that Taiwan is not recognized as a democracy, while a Chinese dictatorship enjoys diplomatic recognition only because it is a major economic power," Shieh told DW.

Although it is difficult to determine where all of the signatures came from, Shieh said that news of the petition spread quickly on social media, and among Taiwanese living in Germany and Taiwan. English and Chinese versions of the petition also quickly found their way online.

According to the petition committee, anyone, regardless of nationality, can support or submit a petition to the Bundestag from anywhere in the world.

Today, only 15 small countries, including the Vatican, have diplomatic relations with Taiwan. Germany has never had formal diplomatic ties with the Republic of China (the official name of Taiwan).

Beijing has always insisted that Taiwan and mainland China are part of the same country, of which only the Communist Party of China is the sole legitimate ruler.

In practice, this meant that for countries to have diplomatic ties with Beijing, they would have to forego relations with Taipei.

"The Republic of China is without doubt a sovereign state," Kreuzberg wrote in his appeal to the German Parliament. "The people freely practice democracy, in contrast to the PRC, which is a one-party dictatorship."

Germany, like the European Union and the United States, exercises "unofficial" relations with Taiwan. The German Institute Taipei serves as Berlin's representative office, and they say bilateral relations are "good and intensive."

According to German government figures, China is currently Germany's most important trading partner, and bilateral trade amounted to nearly €200 billion ($220.85 billion) in 2018. The Chinese market is critical for German car manufacturers; BMW, Daimler and Volkswagen sold around 5.5 million new vehicles in 2018 and earned up to 50% of their global profits in China.

Any country deciding to recognize an independent Taiwan would violate Beijing's "one China principle," and most likely incur retribution that could have far-reaching economic consequences, like being shut out of the vast Chinese market.

Communist Party officials in Beijing see an independent Taiwan as a threat to China's "territorial integrity."

In January, Chinese President Xi Jinping drew international concern by delivering a speech on Taiwan, in which he said: "Unification between the two sides of the [Taiwan] strait is the great trend of history."

"We make no promise to abandon the use of force, and retain the option of taking all necessary measures," Xi said at the Great Hall of the People in Beijing, adding that these "measures" could be used against "external forces."

Shieh said that with these kinds of statements, Beijing is harming its own interests by threatening Taiwan and is earning the island international sympathy and solidarity.

A symbolic statement for Taiwan.

During Monday's hearing in Berlin, petitioner Kreuzberg will present his arguments to the petition committee, along with representatives of the German Foreign Ministry.

After the debate, the petition committee will give a recommendation to the Bundestag, which can then choose to accept or reject what the petition is asking for.

Both Shieh and Kreuzberg admit that there is no chance that Germany will formally recognize Taiwan, but they hope the petition will force the German government to publicly defend its position.

"I am pragmatic, Germany will not formally recognize Taiwan, the pressure from the business lobby is still much too strong," said Kreuzberg. "But the problem has arrived in the Bundestag. And I hope that at least a few policymakers will support it."