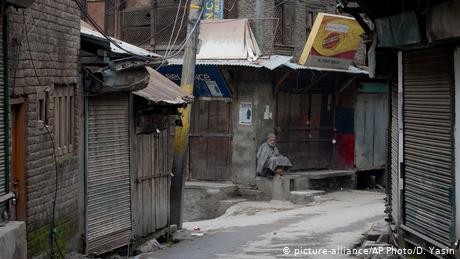 Authorities also cut all communications and imposed a curfew. The continued internet shutdown has severely affected businesses and resulted in unemployment, mostly in the export business, the information technology sector, and the hospitality and tourism industries.

Kashmir is claimed in its entirety by both India and Pakistan, although both countries only control parts of it. The territory has been an ongoing dispute since both became independent countries in 1947. Today, India has de facto control over about 45% of the region and the majority of its population, while Pakistan controls around 35%. But the remaining 20% is actually under the control of China.

According to the Kashmir Chamber of Commerce and Industries (KCCI), the region's main trade body, the lockdown has resulted in economic losses worth at least $1.5 billion (€1.35 billion) for the region since August 5.

The KCCI plans to file a legal complaint against the federal Indian government for the financial losses.

Nasir Khan, senior vice president of the KCCI, told DW that the trade body would ask the court to appoint an external agency to assess the damages.

Muneeb Mir, a young entrepreneur in Srinagar, told DW that he is contemplating shutting down one of his businesses after suffering a big financial loss. "There is hardly any business growth, and a series of setbacks has shattered our confidence," he said.

Similarly, the hotel business in Kashmir has also been affected due to a lack of touristic activities in the region.

Read more: Why calls for independence are getting louder in Pakistani Kashmir

Arun Gupta, the ruling Bharatiya Janata Party's (BJP) spokesperson for Jammu and Kashmir, said the communications lockdown is necessary to maintain security. "The restrictions are not new for Kashmir. The security of the country is more important than the internet. The restrictions will ease when the situation in Kashmir improves," Gupta told DW.

Indian PM Modi has promised to boost Kashmir's economy. He said that more national and foreign investors will turn to Kashmir in the future.

Despite the government's assurance, the economic situation in Jammu and Kashmir has so far not shown any sign of improvement. And Kashmiri businessmen, especially restaurant owners, tour and travel operators, young entrepreneurs and information technology professionals, are facing a difficult time.

The tourism industry, which is considered the region's economic backbone, has remained stagnant since August.

The KCCI says that New Delhi's narrative of Kashmir development is "deceptive."

"The Indian government cannot blame political parties and other groups for the situation in Kashmir. No one is issuing protest calls here. The prevailing atmosphere of uncertainty is a result of the government's own actions," the KCCI argued.

To make matters worse, the early snowfall in Kashmir has further paralyzed business activities. Officials say that a large number of orchards have been affected by the snowfall in Northern Kashmir alone, negatively impacting the region's rural economy.