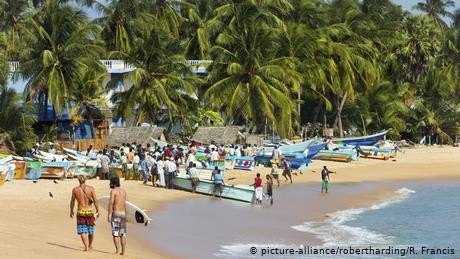 Multiple Easter Day bombings in mid-April targeting three churches and three hotels in the capital Colombo and other cities killed more than 250 people. The "Islamic State" (IS) militant group claimed responsibility for the coordinated attacks.

The bombings were a huge setback for Sri Lankan authorities, as they had managed to rein in some of the violence in the country over the last 10 years. The decades of Tamil insurgency in the country's north had killed thousands of people until the government, under former President Mahinda Rajapaksa, defeated the Liberation Tigers of Tamil Eelam (LTTE) separatist movement in a 2009 military operation.

Peace in Sri Lanka had boosted tourism in the country, and the island nation became one of the top destinations for foreign tourists in the years after the LTTE defeat.

Sri Lanka, which was declared the top tourist destination in the world in 2018, saw a massive slump in tourists in the wake of the terrorist bombings. Authorities say there was a 70% drop in tourists after the attacks, but the tourism industry seems to be witnessing a moderate revival.

According to Madhubani Perera, the marketing director of the Sri Lanka Tourism Promotion Bureau (SLTPB), this Christmas season has seen a small drop in tourists compared to the time last year. "We have recorded an 80% tourist arrival [in the country], so there has been a 20% decline," Perera told DW.

Although the tourism sector was badly affected, Russian tourists kept coming to the country, the official added. "We are looking forward to proper tourism revival by the summer of next year," Perera told DW.

After the Easter Sunday attacks, the Sri Lankan government took tough measures against extremist groups operating in the country.

"Tourists have regained confidence as a result of the government's security measures," N. Shanthikumar, president of the Colombo City Tourist Hotel Association, told DW, assuring that Sri Lanka is now safe for tourists.

Srilal Miththapala, a tourism and hospitality specialist in Colombo, says that although things have returned to normalcy, foreign tourists could still be unsure about visiting the country. He emphasized the need for a more robust and comprehensive PR campaign to send out the message that "Sri Lanka is open for business as usual."

The expert lauded the government's efforts to boost tourism. "The government has announced several financial packages to help the [tourism] industry to overcome the crisis. However, the implementation of some schemes remains problematic," Miththapala underlined.

Chris McElroy, 37, and 40-year-old Nicole Bates Eamer — a Canadian couple — arrived in Sri Lanka on Sunday. They told DW that they always wanted to visit the South Asian country and that they were not "deterred" by the Easter attacks.

"It's a beautiful country with nice people. As we have not traveled around the country as much yet, we cannot really tell what we feel about it at this moment," the couple said.

Eamer, however, expressed concern about the treatment of minorities in the wake of the April attacks. "My work is related to international relations, so I'm aware of the situation here."

The couple said it was a good thing that security personnel were not too visible on the streets. "We wouldn't have felt safe, had there been police all around."

Sri Lanka's Tourism Ministry has also taken several international initiatives to revive tourism. Last month, 25 Japanese travel agents and tour operators were invited to Sri Lanka on a tour organized by the Sri Lankan Embassy in Tokyo so that they can assess the current security situation in the country firsthand.

Last month, then Prime Minister Ranil Wickremesinghe announced the opening of the Jaffna International Airport (JIA) in northern Sri Lanka. The airport is expected to attract tourists from Southeast Asian countries like Singapore and Malaysia as well as the Middle East.