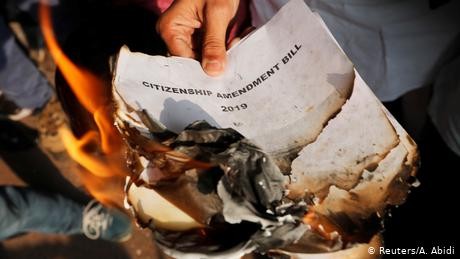 Indian citizenship has always been firmly rooted in the country's constitution, which emphasizes equality, regardless of gender, caste, religion, class, community or language.

The recently approved Citizenship Amendment Bill (CAB) does exactly the opposite. It violates every one of these fundamental values and spreads the wings of "Hindutva," or Hindu nationalism, in this so-called secular country by making religion the key to citizenship.

This unconstitutional act also violates and shreds the provisions in the Indian constitution that guarantee citizens' right to equality, equality before the law and non-discriminatory treatment by the Indian state.

The legislation — which alters the Citizenship Act of 1955 — tears down the inclusive, composite vision that guided India's struggle to gain freedom from British colonial rule. It grants an expedited path to Indian citizenship for people facing persecution in Bangladesh, Afghanistan and Pakistan only if they are not Muslim.

These people can be Sikhs, Buddhists, Jains, Parsis, Christians and, of course, Hindus. But no Muslims — even if they are persecuted minorities like the Rohingya from Myanmar or Ahmadiyyas from Pakistan.

What's the rationale for this exclusion? Are Muslims any less human or facing less brutality in these countries?

One could say that this is the first successful attempt, by statute, to exclude Muslims from the possibility of amnesty and Indian citizenship — for no reason other than religion.

After winning the last general election, Prime Minister Narendra Modi's Bharatiya Janata Party (BJP) has made it abundantly clear that it is willing to ignore the Muslim community.

Even the Supreme Court of India recently awarded a disputed site in the town of Ayodhya to a government-run trust for the construction of a temple to the Hindu god Ram. The disputed land was the site of the 16th-century Babri Masjid mosque, which was razed by angry Hindu mobs in 1992 claiming that a Ram temple predated the mosque.

The Archaeological Survey of India could not prove if there had been a Hindu structure at the site. Nevertheless, the top court granted the land to the "big brother" and told the bullied "little brother" to play somewhere else.

Even though Indian Home Minister Amit Shah says CAB will be implemented separately from the proposed nationwide implementation of the National Register of Citizens (NRC), in my opinion, both should be viewed in the same light. If the Indian Parliament can pass CAB, then what will stop them from passing the NRC?

The NRC in the northeastern state of Assam has already excluded nearly 2 million people from Indian citizenship. This has demonstrated the terrible human costs of dividing people and linking citizenship to documentation in a country where many people are illiterate and lack the proper papers.

Persecuted people have suffered atrocities, broken families and statelessness, among other hardships. It's also true for Muslims.

So why is there no dissent in India? Of course, there have been protests and demonstrations.

Many intellectuals as well as ordinary people have criticized and taken to the streets in protest. But has the criticism influenced lawmakers? Clearly it hasn't.

The new citizenship act shows us that India needs a refugee policy in line with international law, and not a law based on discrimination and dictated by an ideology that makes use of religion for political gains.

CAB will surely unleash widespread division and suffering among people, rather than addressing critical needs of the people — from food security and employment to the elimination of discrimination based on caste, religion and gender.

Unfortunately, it will now become law, as both houses of Parliament have passed the measure. Surprisingly, it was approved in the legislature's upper house — the Rajya Sabha — where the BJP doesn't even enjoy a majority.

If things continue at this pace, it will not be long before the fundamental pluralistic character of India is altered.