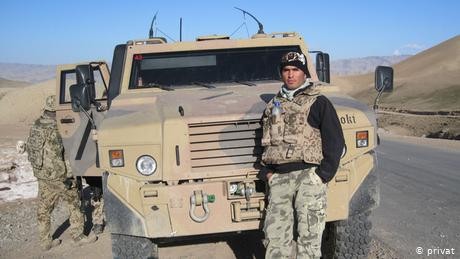 Qais Jalal (name changed) is sitting in front of his laptop in his office. His beard is well-groomed, his hair freshly cut. On the screen, a picture appears. In it, one sees the same man, younger this time, his beard a few days old. He is wearing a bullet-proof vest; his clothes are dusty. Qais Jalal is looking into the face of his former self. It represents an old life for him: as a local employee of the German army, the Bundeswehr.

Local employees are civilians the Bundeswehr hires during its missions abroad as translators, guards or drivers. Qais was 18 years old when he applied for a job as an interpreter. What followed were six years side by side with the German soldiers, following them everywhere they went. Day and night. Even into areas where there was dangerous fighting.

"On the first day, when they handed me my bullet-proof vest and my helmet, I didn't have a good feeling about it. I just thought 'Oh my God. What am I doing here?'" he says. Fear became his constant companion during his assignments, especially after the security situation in his country deteriorated in 2010.

But that did not stop him. "I have always experienced horrible things. I was born in the war; I grew up in the war. That's why I was also able to work for the Bundeswehr for six years during the war," Qais Jalal says.

Local employees generally support Bundeswehr missions and those of other institutions, like the German development agency GIZ, around the world.

But during the ISAF mission in Afghanistan, which started in 2001, their contribution was particularly valuable. Afghanistan was "a fragmented, war-torn society with a high potential for conflict and violence, with more state and non-state actors than in any other Bundeswehr mission," says Winfried Nachtwei, an expert for international security. "That gave the local forces a very special significance for the troops."

Even today, around 1,600 local civilians are still employed by the Bundeswehr and the GIZ, although the ISAF mission officially ended in 2014.

Qais Jalal quickly realized how much he was needed by the German troops. He spent up to 16 days with them at a stretch, traveling through the country, sharing tents with them, without a shower or any contact with his family. During these trips, he spoke to mayors, negotiated with local representatives and mediated between the Afghan army and the German Bundeswehr. To people in his home town, he soon seemed to be "one of them," a soldier. This was to turn out to be life-threatening for him.

Read more: Germany's list of 'safe countries of origin' and what it means

"If the Taliban had had the opportunity, they would have chopped my head right off. But many other people, religious people, also disliked me. They called me a collaborator, an infidel and a traitor. I heard such accusations all the time," says Qais Jalal. When he went to the mosque, people shunned him; nobody wanted to be near him. He seemed "dirty" to them. "So I prayed, but I prayed alone."

After six years with the Bundeswehr, Qais Jalal begged his superior to bring him and his family to Germany. In December 2014, he was finally able to leave Afghanistan, together with his pregnant wife and his son. He was part of a special immigration program, set up for former local employees like him.

Once he arrived in Germany, he used every minute to learn German, managed to pass the German high-school diploma with a very high mark and eventually found a job. He has been employed at the foreigners' registration office in the eastern city of Leipzig for almost a year. With his income, he pays his rent and all living expenses for his family. He always wanted to be independent of the German state. Yet, he isn't happy, because today, five years after his arrival, his residence permit is still temporary.

"What happens when the year is over? What about my children's future? My family's future? My future? We can't go back to Afghanistan." Qais Jalal knows he left everything behind to start a new life in Germany, where he is safe. "But we have not truly found a new home — we are only tolerated."

Qais Jalal closes his laptop, gets into his car and drives home to Magdeburg in the state of Saxony-Anhalt. He has to endure a round trip of more than 300 kilometers (186 miles) every day because his job is in the neighboring state of Saxony — but his immigration status forbids him from moving to that state.

Read more: Are deportations from Germany on the rise?

A humane and respectful solution

The door of his apartment on the fourth floor of a high-rise in Magdeburg opens. Qais Jalal is welcomed lovingly by his 7-year-old son and 4-year-old daughter. They speak mostly German to him, because that is the language that comes more easily to them now.

With a coffee in his hand, he sits down on his white, clean sofa in the living room and suddenly speaks up in a clear voice: "I'm very grateful to Germany. I don't want anything as a gift. I want to work hard. I hope the Interior Ministry finds a respectful and humane solution for people like me — Afghans who worked for Germany and are now here with our families." Because, he says, it is only if permanent residence status is granted that such people can feel really at home in the country.

Qais did a lot for Germany in Afghanistan; he even risked his life. Now, the German Interior Ministry has decided to prolong the residence permits for former local employees until the end of 2021. A small consolation. But in two years' time, the question will arise again of whether Germany owes him and others in his situation the chance to build a secure and permanent life in their new home, or not.