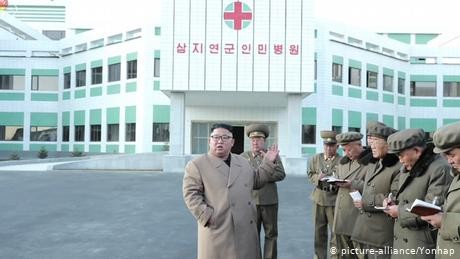 Mothers and infants in North Korea are dying due to inadequate health care at a higher rate than is reported to the UN, according to a recent report from the Database Center for North Korean Human Rights (NKDB).

In the case of maternal mortality, where mothers die during or as a result of childbirth, the number NKDB reports is around 1,200 deaths per 100,000 live births, which is around 15 times higher than the official numbers provided to the UN.

According to the NKDB, UN agencies collecting similar data from within North Korea rely heavily on the North Korean government for access to statistical data or people to survey.

"The North Korean authorities are very careful about the way North Korea is represented and usually do not grant access to areas or facilities that are known to be ill-equipped and in very bad condition. We rely on responses from people arriving from North Korea and resettling in South Korea," Teodora Gyupchanovaan, a NKDB researcher, told DW.

The NKDB report, "The Right to Health in North Korea," was compiled to examine North Korea's current progress toward fulfilling the UN's Sustainable Development Goals.

NKDB interviewed 503 North Koreans currently living in South Korea who defected between 2000 and 2017. The majority of the interviewees were women who worked as nurses or doctors and were familiar with North Korea's healthcare system before leaving the country.

Gyupchanovaan said that the report's findings should not be seen as a replacement for the UN data, and should be considered as supplementary.

What the report makes clear, however, is that the North Korean government is not being truthful about the country's shaky healthcare system.

"It can be inferred that due to the nature of how North Korea operates, the government is concealing its data and underreporting its figures," the expert noted.

"There are cases in which women die after childbirth because they did not receive proper treatment. Women don't die right after they give birth. There are cases in which they start bleeding while walking home, and after continuously bleeding for 2-3 days at home they die," a North Korean doctor who fled the country in 2016 said in one of the interviews.

The report said that early childhood deaths are also underreported in North Korea.

According to official UN datasets, the neonatal mortality rate in North Korea is 10 deaths within the first 28 days per 1,000 live births.

However, the NKDB report revealed a number almost five times higher, at 46 deaths. One of the interviews painted a grim picture of what happens to babies with disabilities.

"If the babies have a disability, they are either not given food until they die or are put face down to suffocate. It was like they never existed."

Although the report paints a grim picture of the state of healthcare in North Korea, it may not be entirely representative.

Lee Myeong-ken, chair of the Department of Global Health Security at South Korea's Yonsei University, said that although the data is correct, 80% of the North Korean testimonies came from rural areas in the north of the country near the border with China.

"It is to be expected that the statistics from this region are worse than in the country as a whole," he said.

"In North Korea's provinces far from Pyongyang there are few qualified doctors and no equipment. The maternal mortality rate in these regions is definitely higher than in the country as a whole."

Nevertheless, these numbers and stories shine a completely different light on healthcare in North Korea than what Pyongyang wants to show.

Recently, the North Korean government has been trying to launch a medical tourism campaign targeting visitors from China for cheap treatments including cataract surgery, dental implants and therapy for tumors.