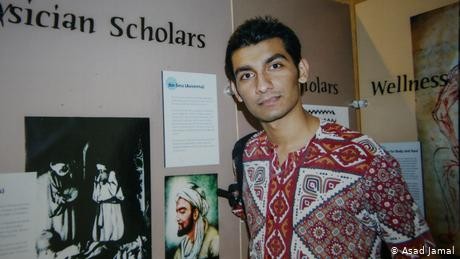 Pakistani university lecturer Junaid Hafeez, 33, was sentenced to death on Saturday on blasphemy charges. He has been in prison, mostly in solitary confinement, while awaiting trial for six years.

"This is a vile and gross miscarriage of justice," Amnesty International's Rabia Mehmood wrote on Twitter.

Asad Jamal, Hafeez's lawyer, told Reuters news agency that he would appeal against the ruling in a higher court.

"There can't be a fair trial in blasphemy cases in Pakistan," Jamal said. "We have a spineless system. No one can stand up to a blasphemy charge."

Government lawyer Airaz Ali hailed the decision as a "victory of truthfulness and righteousness."

Hafeez was a lecturer in English literature at Bahauddin Zakariya University in the city of Multan. Shortly after he began working there as a graduate student in 2011, he found himself targeted by an Islamist student group who took issue with what they considered Hafeez's "liberal" teaching.

The academic was arrested on March 13, 2013, having been accused of using a fake Facebook profile to insult the Prophet Muhammad in a closed group called "So-Called Liberals of Pakistan."

His father has said he was set up by the Islamists on campus, who wanted to get one of their own into an open position at the university.

"In 2013, the university advertised a post for a lecturer. The members of the Islamist Jamiat-e-Talaba organization told him to not apply for the job as they wanted their own people to get it," Hafeez-ul Naseer told DW.

"The group launched a malicious campaign against my son, distributing pamphlets and accusing him of blasphemy. They said he was an American agent," Naseer said.

"My son, who came back from the US to serve his country, was later arrested by police on blasphemy charges," he added.

Hafeez has been in solitary confinement, allegedly for his own protection from the general prison population, since 2014, when his first lawyer was murdered. His conditions have significantly deteriorated since 2018, according to reports.

Pakistan's blasphemy laws have come under hefty criticism, as they have often been used to target minorities, activists, and to settle personal vendettas. Although no one has yet been executed under the laws, about 40 people are currently sitting on death row due to blasphemy convictions.

According to rights groups, around 1,549 blasphemy cases were registered in Pakistan between 1987 and 2017. More than 75 people have been killed extra-judicially after blasphemy allegations. Some of them were even targeted after being acquitted in blasphemy cases by courts.

In 2017, a 23-year-old journalism student in Pakistan was killed by a vigilante mob over allegations of blasphemy.

Last year, Asia Bibi, a Christian woman, was acquitted on appeal and left the country, provoking violent protests across Pakistan.

Pakistan's Christians and other religious minorities have often complained of legal and social discrimination in the country. In the past few years, many Christians and Hindus have been brutally murdered over unproven blasphemy allegations.

In one case, a young Christian girl with Down syndrome was accused in August 2012 of burning pages upon which verses of the Koran were inscribed.

Rimsha Masih was taken into police custody and only released months later, when charges were dropped. The case caused an uproar in her hometown and beyond, and sparked riots and violence against Christians in the region. In 2013, she and her family relocated to Canada.

In 2014, a Christian couple was beaten to death for allegedly desecrating a copy of the Koran. Their bodies were subsequently burned in a brick kiln.

In September last year, a Christian man in Pakistan was sentenced to death for sharing "blasphemous material" on WhatsApp.