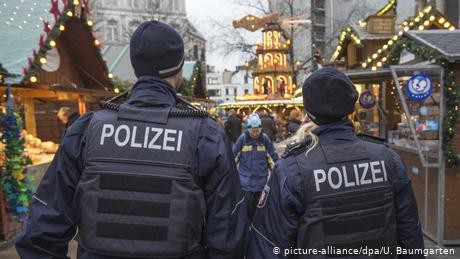 The threat from potential Islamist terrorists in Germany has decreased from last year, according to data from the German Interior Ministry.

A total of 679 Islamic extremists in Germany were considered to pose a terrorist risk at the beginning of November 2019, compared with 774 people at the start of July 2018, according to the ministry, which provided the data in response to a request published by German news agency DPA and weekly Die Zeit.

Germany's Federal Criminal Police Office (BKA)uses the word "Gefährder" (literally: "endangerer") in the context of politically motivated criminality to mean anyone who could potentially commit serious violence or carry out terror attacks.

Armin Schuster, chairman of the Bundestag interior committee, said he believed it was due to an increased commitment to crack down on terror following the Berlin Christmas market terror attack in 2016 in which 12 people died.

Police showed radical Islamists that their activities were not going under the radar, due to the police policy of earlier intervention and contact with identified potential terrorists, said Schuster. This was not only happening at an earlier stage but also more often.

Searches and arrests were happening at an earlier stage than in previous years and police were paying more attention to potential "lone-wolf" attackers, in addition to those acting as part of a network or a group, he added.

The data from the ministry comes as German authorities begin taking back Islamic State fighters from Turkey. German Chancellor Angela Merkel said that each suspected Islamist deported by Turkey would be assessed in counter-terrorism centers run by the federal government and the individual states.