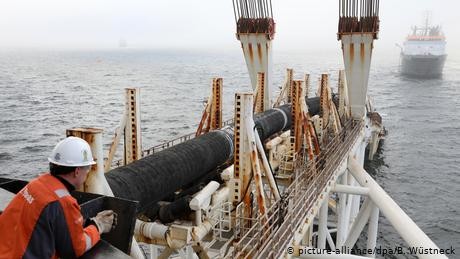 US sanctions targeting the Nord Stream 2 gas pipeline between Russia and Germany became law on Friday evening after President Donald Trump signed off on a massive defense bill.

The sanctions target companies involved in constructing the $11 billion (€9.93 billion) energy project, which will transport Russian gas under the Baltic Sea and deliver it directly to Germany.

The Trump administration now has 60 days to identify companies and individuals providing services for the pipeline. The sanctions allow Washington to revoke US visas and block the property of these individuals. Those targeted by the sanctions would then have 30 days to wind down their operations.

On Saturday, the group behind the pipeline said it would aim to complete the project quickly in an effort to minimize the damage of US sanctions.

"Completing the project is essential for European supply security. We, together with the companies supporting the project, will work on finishing the pipeline as soon as possible," Nord Stream 2 said in a statement.

'A severe intervention in German and European internal affairs'

The bill describes Nord Stream 2 as a "tool of coercion and political leverage" that Moscow could use against Berlin — and says it risks significantly weakening US ties to Germany and other European allies.

US lawmakers in both houses of Congress overwhelmingly approved the sanctions.

German Chancellor Angela Merkel's government has condemned the measures, urging the US not to meddle in European energy policy. "They affect German and other European businesses, and we see the move as meddling in our internal affairs," a government spokeswoman said.

The sanctions are also opposed by the European Union. A spokesman slammed "the imposition of sanctions against EU companies conducting legitimate business."

Russian President Vladimir Putin has already vowed to continue with the project and has threatened "reciprocal" measures. Russian Foreign Ministry spokeswoman Maria Zakharova accused the United States of pushing an ideology that hindered global trade, adding on her Facebook page: "Soon they will demand that we stop breathing."

Ahead of the sanctions being signed into law, Swiss-Dutch company Allseas suspended its pipe-laying activities. The company was hired by Russian state-owned energy giant Gazprom to build the offshore section.

The pipeline was expected to become operational in the next few months, although the completion date for the project has now been thrown into doubt.