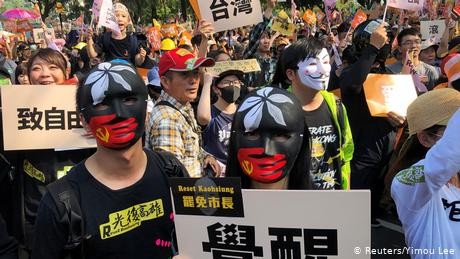 Hundreds of thousands of people demonstrated in the southern Taiwanese port city of Kaohsiung on Saturday in protests for and against Mayor Han Kuo-yu, the presidential candidate of the opposition China-friendly Kuomintang (KMT) party for January elections.

More than 300,000 people took place in a rally against Han in the south of the city, according to the organizers, the NGO We Care Kaohsiung. The protesters called for Han to be recalled as mayor, accusing him of leaving the city in the lurch to join the presidential race just months after his election in November last year.

Others at the anti-Han rally focused on his widely perceived pro-Beijing stance, waving banners reading "Want Democracy" and "Support Hong Kong," in reference to the struggle of many in that city against increasingly assertive Chinese rule.

Taiwan, which has been a de facto sovereign nation since the end of a civil war in 1949, has also come under growing pressure from Beijing, which regards the island as its territory.

Recent threats from China that Taiwan's unification with the mainland is "inevitable" and its efforts to isolate the island diplomatically have helped the campaign cause of Taiwanese President Tsai Ing-wen, who has pledged to resist Beijing if re-elected.

Currently, polls show Tsai well in front of Han in terms of voter support, with most polls giving her 35-50% compared with 15-30% for him.

However, Han's supporters were also out in force on Saturday, with organizers saying more than 300,000 had gathered in northern Kaohsiung to display their backing.

The presidential elections in Taiwan are to take place on January 11.