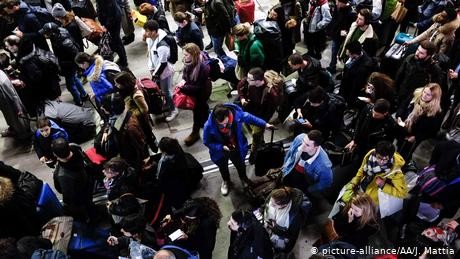 Travelers and tourists in France struggled to reach their destinations on Saturday as ongoing strikes against the government's pension reforms disrupted travel for the Christmas holidays.

Despite the plans, only half of SNCF's high-speed trains were running. Regional trains, including in Paris, continued to be severely disrupted.

A two-week nationwide strike against President Emmanuel Macron's plans to overhaul the pension system has forced hundreds of thousands of people to seek alternative modes of transportation during one of the busiest times of the year.

Car-sharing services and bus companies have seen a surge in reservations, although vehicles are becoming increasingly hard to come by.

"We tried other ways, BlaBlaCar, etc, but everything is full, everything is taken," Jerome Pelletier, a manager in the textile industry, told news agency AFP.

Macron, who is on visit to the Ivory Coast, urged transportation workers on Saturday to suspend the strikes during the holiday season.

"Strike action is justifiable and protected by the constitution, but I think there are moments in a nation's life when it is good to observe a truce out of respect for families and family life," he said.

Macron added that briefly suspending the strike would not mean that unions abandoned their demands.

Instead, it would show "the sense of responsibility and the respect owed to French people who are sometimes apart and wish to be reunited during this festive period," he said.

Most transportation unions have called for the strikes to continue over the holiday period after the French government and union leaders failed to end the standoff this week.

What are the pension reforms?

The reforms would also scrap schemes that offered advantages to mainly public-sector workers — including train drivers who can retire at the age of 52.

The plans would also raise the age workers would have to reach in order to get a full pension from 62 to 64.

The government argues that the new system would be more transparent and fairer, while unions and many French workers worry that they would have to work longer for lower pensions.