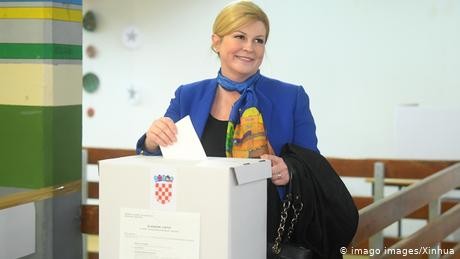 Near-complete results from Croatia's presidential election on Sunday suggested that Social Democrat Zoran Milanovic and President Kolinda Grabar Kitarovic will go head to head in a final vote to decide the country's next leader.

With almost 98% of the ballots counted, state election authorities reported Milanovic led the first round of voting with nearly 30% support. President Kolinda Grabar Kitarovic had almost 27%, eliminating Miroslav Skoro from the race, who came in third with a share of around 24%.

Milanovic, a former prime minister, and Grabar Kitarovic, who is seeking a second term, will now face each other in a final runoff on January 5.

Croatians cast their votes earlier on Sunday, and given the closeness of the contest, it was unsurprising that a higher turnout occurred than in the country's last election, with some 100,000 more citizens casting their ballot this time around in comparison with 2014.

Grabar Kitarovic, who assumed office in February the following year, is backed by the country's governing conservative Croatian Democratic Union (HDZ). The center-right party has led the country for most of the time since independence from the former Yugoslavia in 1991. Furthermore, the HDZ is hoping to stay in power as Croatia assumes the Council of the European Union's (EU) presidency for the first time for the first six months of 2020.

The presidential post is primarily ceremonial. Nevertheless, the new president is expected to represent Croatia abroad and command its army.

Both Grabar Kitarovic and Skoro had dedicated parts of their campaigns to Croatian nationalism to appeal to conservative voters.

Matija Horvat, a 27-year-old economist preparing to vote in Zagreb, told French news agency AFP that he was disappointed with a campaign that concentrated on the past instead of the future.

"They stole the space for issues of vital importance for most people's lives, including the young who are leaving in increasing numbers," he said.

As the European Union's newest member state, Croatia has been struggling with an emigration exodus as large numbers of Croatians leave for neighboring countries in search of better employment opportunities.

Grabar Kitarovic had started off stronger than the other 10 candidates, but her popularity dropped after a number of gaffes during her presidential campaign.

The 51-year-old is struggling to maintain her grip on hard-liners shifting their support to Skoro. In her reelection bid, Grabar Kitarovic played on an emotive symbol of the 1990s independence war.

She staged her final campaign rally on Friday in the eastern town of Vukovar, a town that had witnessed bloody conflict with Serbian forces and became emblematic of Croatian suffering during the Yugoslav Wars.

Grabar Kitarovic told crowds those who fought and died in the war "don't regret being killed since Croatia is (now) here."

Meanwhile, 57-year-old Skoro appealed to nationalist voters by vowing to deploy troops at the country's borders to prevent migrants entering as well as to pardon a convicted war criminal.

Social Democrat Milanovic, who was prime minister from 2011 to 2016, pledged to make Croatia a "normal" country with an independent judiciary and tolerance and respect for minorities.

Croatia remains one of the poorest economies in the EU, and corruption is believed to be widespread. The government has been criticized for setting the voting date in the lead-up to Christmas, a time when many people in the country travel abroad.