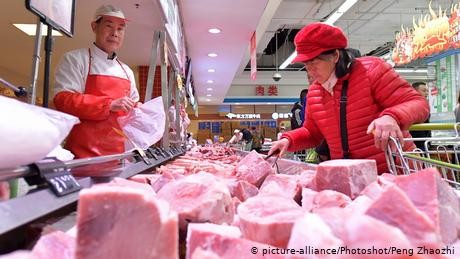 Import tariffs on more than 850 products will be lowered in the new year, China's Finance Ministry announced on Monday.

As of January 1, tariffs on frozen avocado will be slashed to 7%, compared to the current most-favored-nation duty of 30%.

Frozen pork will also see a reduction, with the rate dropping to 8% from the current duty of 12%.

Tariffs on some asthma and diabetes medications are due to drop to zero, in a bid to lower medication costs and stimulate the production of new drugs, the ministry said in a statement.

Import duties on multi-component semiconductors will also be cut to zero. Several wood and paper products will also see a reduction.

By lowering the tariffs, China hopes to boost imports as it faces a slowing economy — which is currently expanding at its weakest rate in nearly 30 years.

Beijing is also currently embroiled in an ongoing trade war with the United States, which has seen both sides implement billions in punitive tariffs.

The country is currently experiencing a severe pork shortage after a wave of African swine fevertore through China's pig farms.

More than one million pigs were culled to stop the spread of the disease, more than doubling the price of pork in China. The shortage has global consequences as well, with Germany predicted to experience a schnitzel shortage as a result of the China's Swine Fever epidemic.