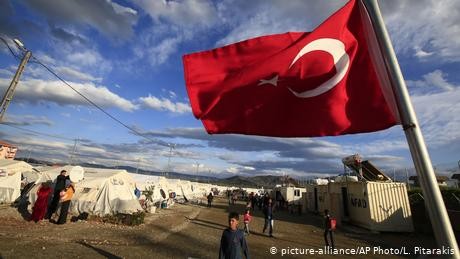 Turkish President Recep Tayyip Erdogan on Sunday said his country could not handle a new wave of refugees as tens of thousands flee a fresh Russian offensive in the Syrian province of Idlib.

"If the violence towards the people of Idlib does not stop, this number will increase even more," Erdogan said during an award ceremony late Sunday. "In that case, Turkey will not carry such a migrant burden on its own."

Turkey currently hosts nearly 3.7 million registered Syrian refugees and has previously warned Europe that it could no longer bear the brunt of the conflict.

The Humanitarian Relief Foundation, a Turkish aid group, on Monday reported that the number of people fleeing the violence and heading to Turkey had reached 120,000.

"The negative impact of the pressure we will be subjected to will be something that all European nations, especially Greece, will also feel," Erdogan said.

Currently, Turkey has actively prevented Syrian refugees from attempting the perilous journey to Greece in exchange for billions of euros from the EU. Erdogan has accused Brussels of failing to deliver on the deal, saying Turkey still expects the promised €6 billion ($6.6 billion).

The EU, along with the US, has been critical of Turkey's incursion into northern Syria, saying the military offensive against Kurdish militias has further destabilized the situation in Syria. Turkey, however, has remained defiant.

"We call on European countries to use their energy to stop the massacre in Idlib, rather than trying to corner Turkey for the legitimate steps it took in Syria," Erdogan said.

More than 300,000 people have been killed and millions more displaced by the Syria conflict, now in its ninth year. While the Syrian regime has managed to consolidate vast swathes of territory across the country, the Idlib province remains home to hard-line militant groups and a Turkish security presence.