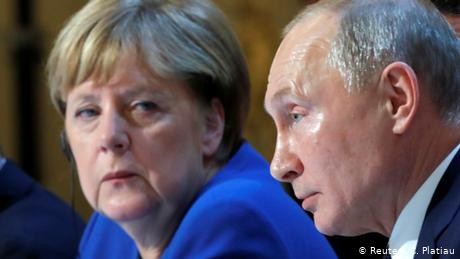 German relations with Russia have reached a new political low point. But despite the murder of a Georgian citizen in Berlin, the German government and almost all German parties have got back to business as usual with great haste, as if nothing were amiss. As always, no one wants to alienate Putin unnecessarily, because he is needed in important areas of foreign policy — for example, in the Middle East, in eastern Ukraine and on the issue of nuclear weapons. At least, that is the generally accepted view, which is doubtless correct in itself.

But that view is also the source of a disastrously mistaken calculation in Germany's policy toward Russia: the belief that diplomatically talking down Putin's attacks on Europe's system of law and its blueprint for lasting peace could persuade him to make concessions on other issues.

The opposite is the case: For Putin, diplomatic silence demonstrates weakness. This weakness of Europe makes him strong — both at home and on the international stage. Because whoever manages to push through their own definition of what an event means amid the fog of fake news currently clouding public perception gains the political upper hand. That is why the public discourse in the modern world of communications, with internet and social media, has also become such an important gauge of intergovernmental power in the field of foreign policy. Who can permit themselves to say something to someone else without having to fear consequences?

The chancellor conciliates as Putin lies

When French President Emmanuel Macron — annoyed by Trump and frustrated by Berlin's lethargy in pushing ahead with Franco-German cooperation on defense — brashly diagnosed NATO as experiencing "brain death," the chancellor rushed to the mike. And there she declared that she and the German government did not share Macron's view.

But when the Georgian activist Zelimkhan Khangoshvili was murdered in broad daylight in Berlin's Tiergarten park at the end of August, an awkward silence initially prevailed on the part of the politicians in the German capital. This was even though the trail soon led to Vadim Sokolov amid evidence of the obvious support by Russian state agencies — in other words, the murder was a commissioned killing that is unlikely to have occurred without Putin's approval.

In the end, however, German federal prosecutors could not do otherwise than take over the investigation themselves, because Russia refused to give any assistance at all. And when the background to the crime could no longer be kept secret, the German government was forced to expel two employees at the Russian Embassy if it didn't want to make itself completely ridiculous with regard to Putin — an extremely mild reaction to what was a flagrant attack on German sovereignty and security.

At the closing press conference of the Normandy-format meeting in Paris, Putin stated, in the presence of the chancellor, that Khangoshivili was a "bandit" and that Berlin had failed to respond to Russian requests for his extradition. Of course, this was a barefaced lie and a tacit justification of the killing, as well as a virtual confirmation that it had been an assassination by Russian government agencies. The chancellor also knew, of course, that it was a lie — but still said nothing about it. The next day, the German press spokesman said meekly that no Russian requests for extradition had ever been received.

Who says what's what?

Putin is being allowed to lie to Berlin without being called to account. This means that Berlin is inexcusably giving Putin the power to say how the world should view his attacks on German sovereignty and his usual patterns of explanation, according to which Russia is always the innocent victim of defamation by the hostile West; Russian soldiers were never in eastern Ukraine; The Malaysian Airlines Boeing carrying 298 passengers may have been shot down with a Russian Buk missile, but that missile, naturally, did not come from Russia. Any view to the contrary is just conspiratorial slander by the West.

But Germany's policy toward Russia must not allow Putin to get away with such interpretations of events. Conceding him the right to put whatever slant he chooses on things without contradiction constitutes official approval of his actions and gives him even more scope for blatant attacks on German sovereignty. This must be clear to all representatives of the German government and political parties who believe that Putin can be inveigled into any form of cooperation or economic concessions by shortsightedly ignoring and playing down his flagrant breaches of international law. On the contrary: Those who are seriously interested in gaining Putin's doubtless necessary cooperation must not shy away from speaking clear words in public.

Jörg Himmelreich is an affiliate professor at the ESCP Business School in Paris and Berlin.

DW sends out a selection of the day's news and features. Sign up for it here.​​​​​​​