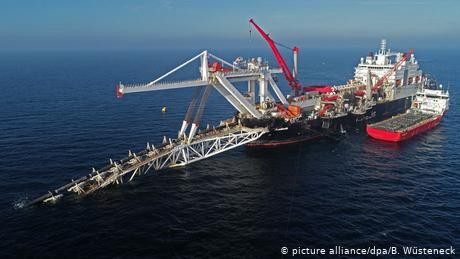 The EU should enact "climate tariffs" against the US in response to sanctions against the bloc for the construction of the deep sea gas pipeline Nord Stream 2, an economist at the German Institute for Economic Research (DIW), a German think tank, says.

Climate tariffs are necessary to prevent gas extracted through fracking, an ecologically harmful process, from being exported from the US to Germany and the EU, environmental economist Claudia Kemfert told Germany's Handelsblatt on Monday.

Kemfert, who leads the energy, traffic, and environment department at DIW, characterized US sanctions against the EU as an "aggressive instrument of a fossil energy crisis." Both Russia and the US are using natural gas as a "political weapon," she said, adding that the intention behind the sanctions is to sell US gas to Germany and the EU at the highest possible cost.

The economist agreed that criticism of the gas pipeline connecting Germany and Russia through the Baltic Sea is justified, saying that it is "environmentally harmful, economically unnecessary, and financially unprofitable."

But the US sanctions are "unacceptable" and Europe should stand up to them, she said. Russia has also announced retaliatory measures, with Kremlin spokesman Dmitry Peskov saying "how and when it will be done remains a question of Russia's national interests."

In a response given Monday, Germany's Coordinator for Transatlantic Cooperation Peter Beyer said countertariffs are not the solution. Escalating the conflict would be inappropriate, the coordinator told public broadcaster Deutschlandfunk, saying it should instead be solved through political means.

On Friday, US President Donald Trump signed legislation that included sanctions against companies and individuals that work on the Nord Stream 2 project. The measures, which have yet to go into effect, include a ban on entering the US and the freezing of assets held there.

Read more: How the Druzhba pipeline brought East Germans and Ukrainians together

Allseas, the Swiss-based company laying the pipeline, announced it is suspending its involvement with the project in response.

Germany fears sanctions will delay the continued construction of the pipeline, Meyer said. The pipeline is currently pegged for completion in the second half of 2020. The group responsible for the construction said it hopes to complete the project as soon as possible.