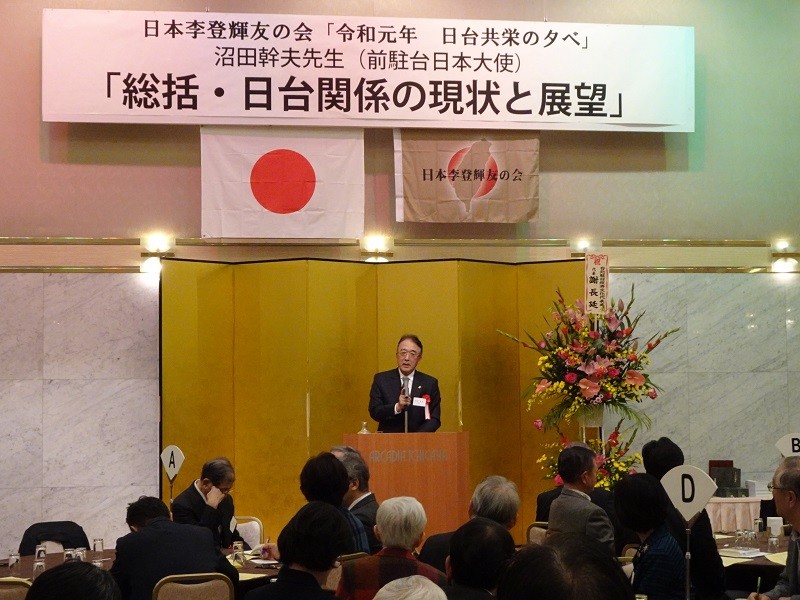 The presidential and legislative elections are only 18 days away. Most recent polls from media outlets show Tsai to have a commanding lead of more than 20 points over Kaohsiung mayor and KMT presidential candidate Han Kuo-yu (韓國瑜).

Serving as the head of the Japan-Taiwan Exchange Association (JTEA) in Taipei from July 2014 to October 2019, Mikio Numata (沼田幹夫) is well-versed in Taiwanese affairs and politics.

At a year-end banquet held Sunday by the Friends of Lee Teng-Hui Association in Japan, Numanta was invited to speak on the state of Japan-Taiwan relations. Numata remarked that the result of Taiwan's 2018 elections had been accurately predicted in the de facto Japanese embassy's pre-election assessment report, CNA reported.

One year later, the embassy believes Tsai will beat Han by 5 points in 2020 instead of the 20 points forecast in recent polls.

Numata said that Tsai gained the upper hand due to two events: the "one country, two systems" formula reiterated by CCP Chairman Xi Jinping and China's meddling in Hong Kong's pro-democracy protests, saving her from the less than 20 percent support she registered earlier this year.

However, Numata does not think Tsai could actually win by 20 points, as many polls suggest, for one reason: her lack of charisma.

"Tsai is a capable, steadfast, and honest politician, but she lacks charisma to inspire action within others, which is, however, the opposite in Han's case," he said. He described Han as a politician with a charismatic style of leadership and good sense of humor but with nearly zero performance in terms of policymaking and execution.

The seasoned Japanese diplomat remains cautious over the result and is not absolutely convinced Tsai will be reelected as the country's leader. He believes that if she wins, it will likely be within a 5-point margin, according to the report.

Numata also commented on the legislative elections, saying the ruling DPP might fail to gain a majority, possibly losing more than 10 of its current 67 seats in the Legislative Yuan, while the KMT could replace it as the largest political party represented in the legislature. If the scenario of a divided government is realized, Tsai will face hurdles in implementing major policies.