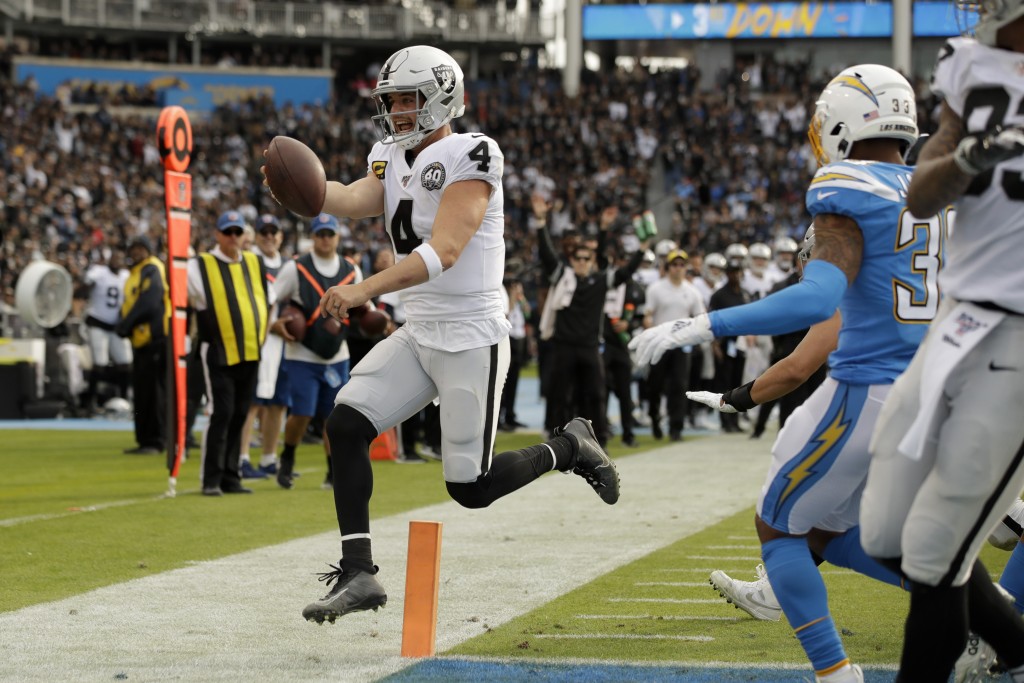 CARSON, Calif. (AP) — Derek Carr threw for 291 yards and a touchdown as the Oakland Raiders kept their playoff hopes alive with a 24-17 victory over the Los Angeles Chargers on Sunday.

The Raiders (7-8) had slim postseason chances coming into the day, but losses by Pittsburgh and Tennessee have given them renewed hope. They need a win over Denver next week and some help for only their second postseason trip since 2003.

Carr completed 26 of 30 passes and also ran for a score. The 86.7% completion rate is his second highest in a game and is the fifth time in his six-year career he has completed more than 80% in a game.

Oakland took control with touchdowns late in the first half and on the opening drive of the second half. Hunter Renfrow had his first 100-yard receiving game with seven receptions for 107 yards and a touchdown. DeAndre Washington added 85 yards rushing on 23 carries and a TD.

Melvin Gordon scored two touchdowns for the Chargers (5-10), who have dropped five of their last six. Philip Rivers was 27 of 39 for 279 yards in what could be his final home game with the Chargers. The 16-year veteran quarterback's contract expires at the end of the season. Keenan Allen had five receptions for 71 yards.

It was the Chargers' final game in Carson before they move into the new stadium at Hollywood Park next season with the Rams.

Carr threw his fourth touchdown pass on an opening drive this season when he connected with Renfrow for a 56-yard score. Renfrow caught it at the LA 47 on a slant route, eluded an arm tackle from Desmond King and outraced Rayshawn Jenkins for his third TD.

The Chargers went three-and-out on their first three drives but tied it on the first play after the two-minute warning in the second quarter on Gordon's 1-yard run off left tackle. Oakland regained the lead at the end of the half with an 11-play drive, culminating in Carr's 2-yard scramble off right end with 8 seconds remaining. The key play was a 12-yard completion to Jalen Richard on fourth-and-2 from the LA 42.

Oakland then took the second-half kickoff and went 75 yards, with Washington's TD coming on the 13th play of the drive for a 21-7 lead. The Chargers got back within a touchdown on Gordon's 1-yard run but the Raiders then went up 24-14 on a 48-yard field goal by Daniel Carlson.

Michael Badgley's 27-yard field goal with 1:29 remaining gave the Chargers a glimmer of hope, but Oakland recovered the onside kick and ran out the clock.

RAIDERS' PATH TO THE PLAYOFFS

Oakland needs to beat Denver next Sunday, needs losses by the Titans at Houston and Steelers at Baltimore along with Indianapolis beating Jacksonville.

That would create a four-way tie. Oakland would win the tiebreaker over Pittsburgh based on strength of victory and Indianapolis by virtue of its win in Week 4. The Colts would eliminate Tennessee by having a better division record.

Raiders: Cornerback Trayvon Mullen collided with safety Curtis Riley on a reception by Andre Patton during the fourth quarter. He was taken off on a stretcher but was moving his arms.

Raiders: conclude the season next Sunday at Denver. Oakland won the first meeting 24-16 in Week 1.

Chargers: wrap up the year at Kansas City next Sunday. Los Angeles has dropped 10 of its last 11 against the Chiefs, which included a 24-17 loss in Mexico City in Week 11.