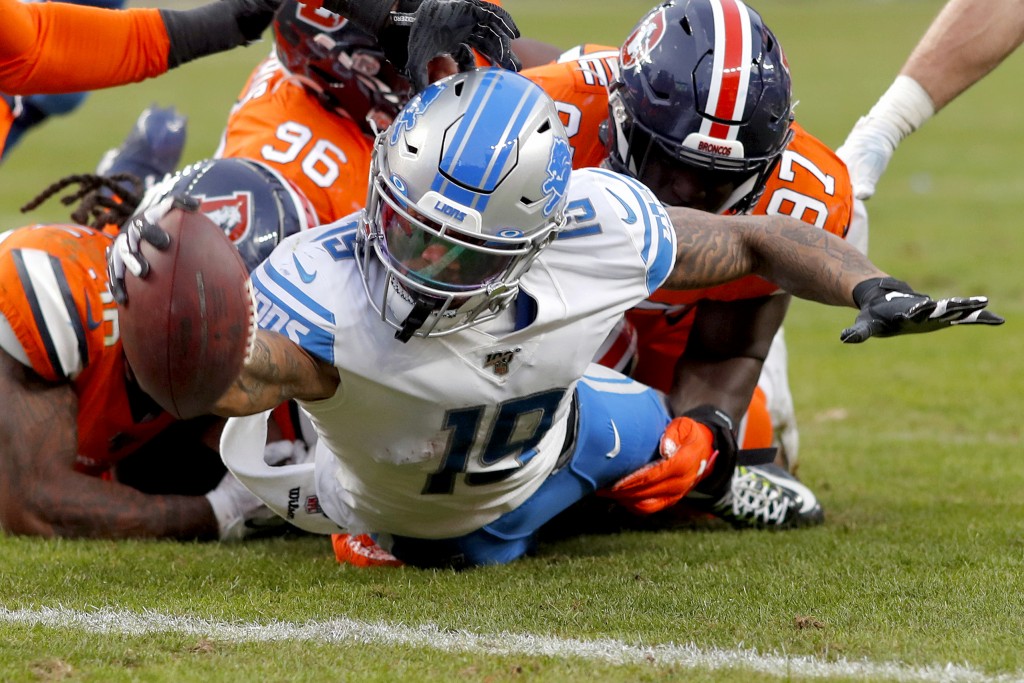 DENVER (AP) — Drew Lock and Phillip Lindsay stood out even more than those hard-to-miss, all-orange uniforms worn by the Denver Broncos.

Lock threw a sh ovel pass to DaeSean Hamilton to put Denver ahead, Lindsay sealed the game with a late TD scamper and the Broncos extended the Detroit Lions' skid to eight straight with a 27-17 win Sunday.

Trading the snow for much balmier conditions, Lock efficiently led the offense. He finished 25 of 33 for 192 yards in improving to 3-1 as the Broncos starter. His only loss was last weekend in Kansas City when the field was covered in snow.

No need to worry about that this time.

The Lions (3-11-1) got a punt return for a score from Jamal Agnew and sporadic play from rookie David Blough, who was under constant pressure and sacked four times. Detroit hasn't won in two months.

Detroit took a 17-13 lead in the third quarter on Kenny Golladay's 3-yard catch.

On the ensuing drive, Denver reached deep into its play book to pick up a fourth-and-1 near midfield. Fullback Andrew Beck took the ball from Lock on a sweep and then tossed it to a trailing Lindsay, who picked up the first down. Beck was credited with a 6-yard pass completion.

Later, Lock completed a side-armed pass to Hamilton for a 3-yard score and the Broncos wouldn't trail again. Lindsay gave them some insurance with a 27-yard TD scamper as he finished with 109 yards rushing. His fellow tailback, Royce Freeman, added a score.

Denver safety Trey Marshall made his first start with Kareem Jackson suspended over a DUI case. Marshall was involved in a big play in the fourth when Golladay broke free deep. It looked as if Marshall knocked the ball away, but replays showed Golladay couldn't secure it.

Agnew weaved his way through the teeth of the Broncos coverage unit and then avoided diving punter Colby Wadman for a 64-yard score in the second quarter. His score gave Detroit a 10-0 lead.

It was his third punt return for a score since being drafted in 2017.

Earlier this season, Agnew also scored on a 100-yard kickoff return. The Broncos didn't give him much of a chance to duplicate that feat — booting it out of the end zone.

Kicker Matt Prater moved past a big name on Detroit's career scoring list with his 26-yard field goal in the first quarter. He surpassed Hall of Famer Barry Sanders for third-most points.

Social media was buzzing over the brace Lock wore on his left knee. He donned a similar brace in his other starts, but this version happened to stick out more set against Denver's bright uniforms.

Lions: Linebacker Jahlani Tavai was ruled out in the third quarter with a shoulder injury.

Broncos: Finish the season at home against Oakland on Sunday.