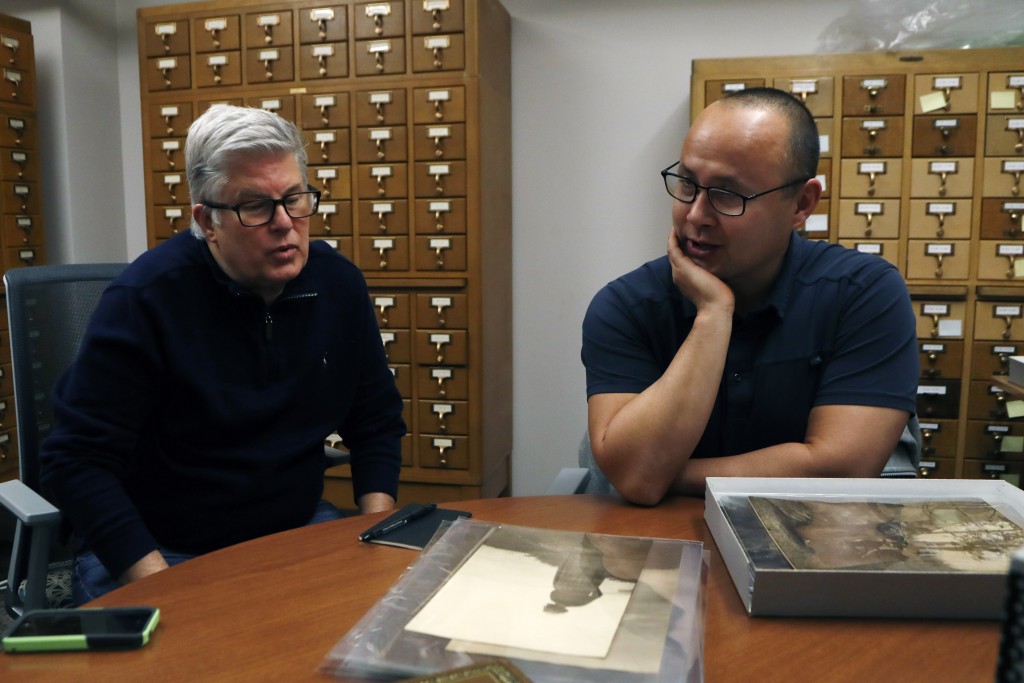 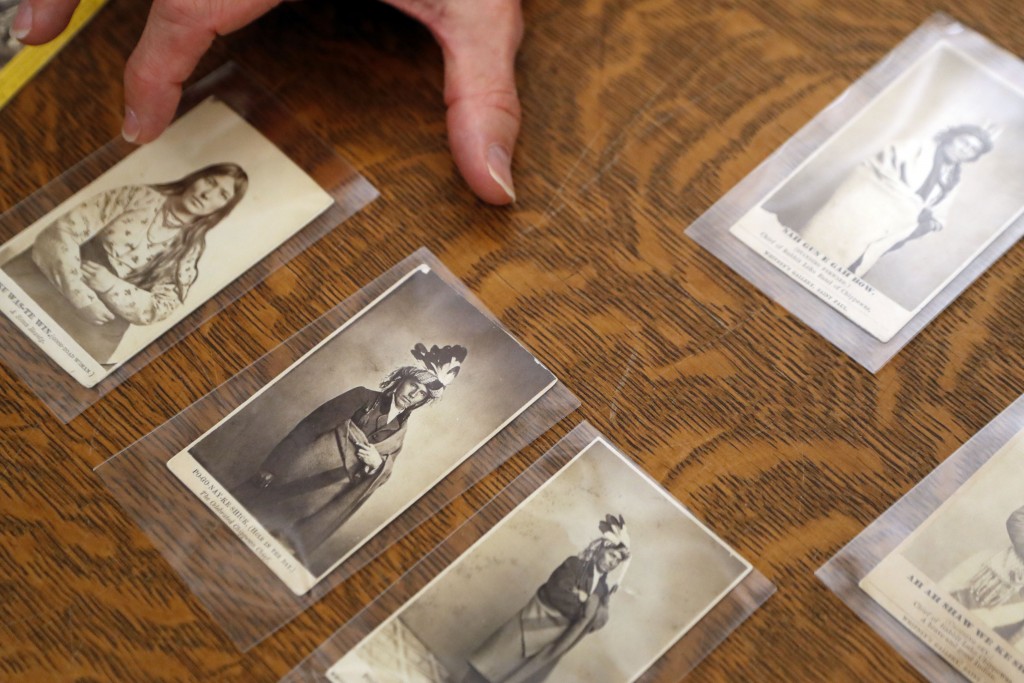 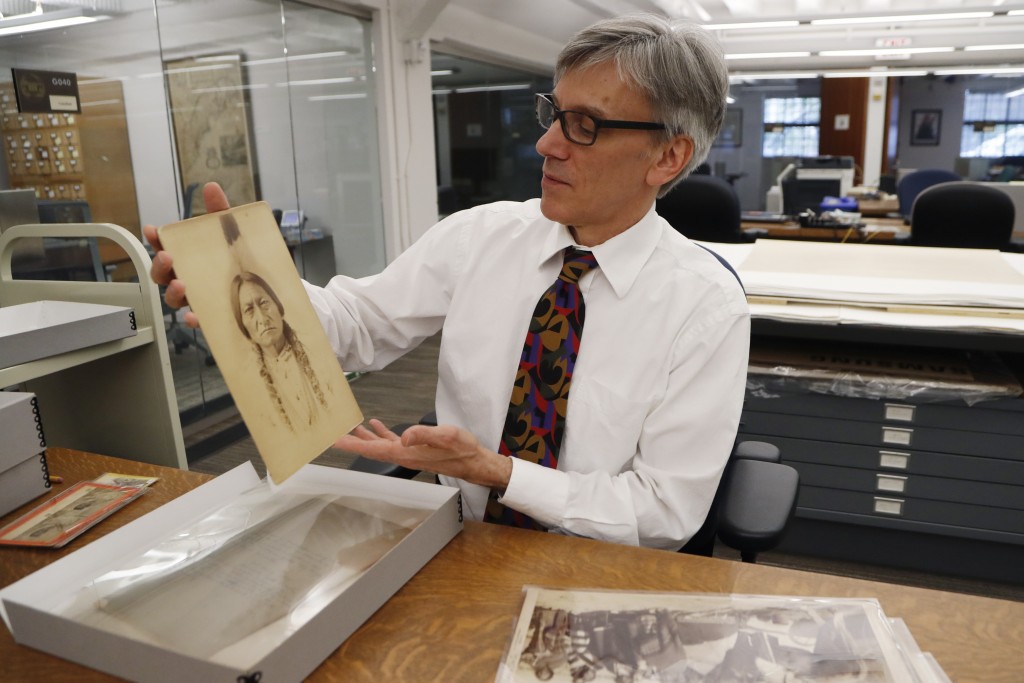 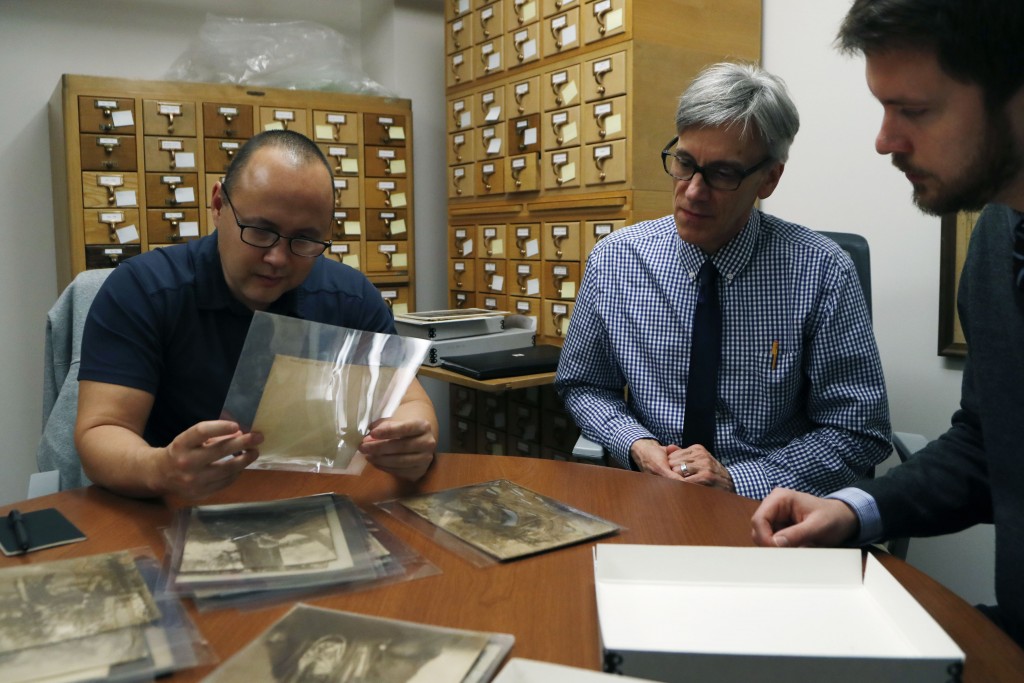 ANN ARBOR, Mich. (AP) — Of the roughly 1,000 images of Native Americans from the 19th through the early 20th century, Eric Hemenway kept returning to one: a lone woman hoeing potatoes in a Michigan garden.

The director of archives and records for the Little Traverse Bay Band of Odawa Indians was poring over boxes of photos in the Clements Library of University of Michigan, which acquired the rare trove from a collector. Others might be drawn to Sitting Bull staring into the camera lens, or Geronimo posing with this elite band before capture. But for Hemenway, the picture of Viola Assinaway, an ancestor through marriage, is commonplace yet compelling: It offers visual proof of his people’s continuous presence.

“We were here before Columbus, and we are here after Columbus. Not many tribes can say that,” he said. “How do you prove that to somebody? Photos area really powerful way. There’s no denying it.”

There’s also no denying that universities have historically sidelined or shut out Native Americans in deciding how such photos should be handled. But this time, the University of Michigan sought out help from Hemenway and other tribal consultants to provide cultural context and — when warranted — caution on this collection, which was acquired in 2016 and is now being publicly announced.

“We’ve had a variety of different reactions from tribal historians and Native American studies professors as to how those should and should not be presented," said Clayton Lewis, Clements’ curator of graphics.

The trove, representing some 80 indigenous groups, includes photos from government-sponsored expeditions, stereographic, or 3D images, and cartes de visites, card-mounted photos that became a global collectible craze in the 1860s. The university acquired them from Richard Pohrt Jr. for an undisclosed price, has collected photos and artifacts for a half-century.

Lewis said some images haven't been seen and others, such as those of Geronimo or Sitting Bull, made their way into books, the internet and even onto clothing. Still, much of the distinctiveness is derived from how close the photos are to the originals: The picture of Geronimo and his compatriots, for instance, is a print straight from the negatives, making it “as good a copy as you’re going to get,” Lewis said.

More important, he said, the photos being digitized for the public, physically accessible for researchers, and, eventually prepared for exhibition, have often been missing context when they have appeared elsewhere. For Lewis, it’s about avoiding “faceless stereotypes” and embracing accurate descriptions of subjects and the circumstances in which photos were taken.

Lewis also has worked with the university’s representative for the Native American Graves Protection and Repatriation Act, a 1990 law requiring museums to follow a process for transferring human remains and associated funerary objects to tribes. The situation with photos doesn't directly apply, but he said it’s nonetheless important to honor the spirit of the law.

The university’s rocky relationship with Native Americans goes back to its beginnings. It was founded in 1817 as the first public university in the Northwest Territory, on Detroit land that had been ceded by three tribes, including the Odawa. It was given with the understanding that tribal children would be educated, but they never received any direct benefit. The land was sold when the school moved to Ann Arbor.

Some of the culturally problematic photos in the collection include those from rituals, scared dances and ceremonies. Some likely will be available at the library but not to the public online.

The collaboration with Hemenway and other Native American experts won’t end with the official launch. Lewis expects conversations to continue, and both he and Hemenway have discussed joint programs and exhibits at the university and at the tribes.

The creation of the archive — and work with descendants of its subjects — is gratifying for Pohrt, whose father also was a collector. He said he would “have to live several lifetimes” to assemble all the stories and information behind the photos, and he welcomes making it “available to scholars, native peoples and the public at large.”

“It’s such an important time in American history and a facet of American history that has relevance today, which we don’t want to forget,” Pohrt said. “Eric mentioned he wants people to be conscious of Native Americans moving ahead into the 20th century. It just doesn’t end with my collection, which is very focused on a 50-year period.”

For Hemenway, the archive benefits scholarship while also boosting the relationship between the university and indigenous people.

“When I first started, you wouldn’t have these conversations. You’d really have to pry, rally, push or lean at times,” he said. “To have Clayton contact me initially, that’s a nice shift ... in the realm of historical interpretation and curation.”