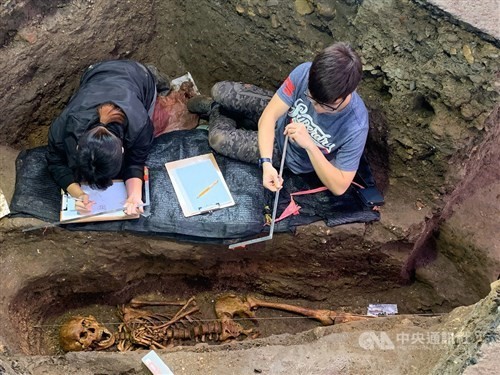 Excavations of a Spanish monastery complex on Keelung City's Heping Island have uncovered another human skeleton, the 10th such discovery since archeological work began on the site in May, the Keelung City Cultural Affairs Bureau said Friday.

According to the culture bureau, the excavations are being undertaken in an effort to learn more about the settlement of fort San Salvador, which the Spanish built on the island during their occupation of northern Taiwan from 1626-1642.

The project is being led by Tsing Hua University anthropologist Tsang Cheng-hwa (臧振華), with assistance from a team of Spanish researchers.

The bureau said the latest skeleton, which was unearthed Thursday, had its hands clasped over its chest as if in prayer.

A representative of the research team, meanwhile, said that the skeleton's condition was good, but added that they would finish the current stage of their excavation, before carrying out forensic tests to determine whether the remains are consistent with Spanish ancestry.

According to the bureau's director, Chen Ching-ping (陳靜萍), artifacts discovered at the site in recent months include a belt buckle, crucifix, porcelain and what appear to be musket balls.

In addition to its Spanish colonial history, Heping Island has earned a reputation for archeological richness in recent years, as it is home to discoveries dating to Taiwan's Yuanshan Culture (3,000-2,000 B.C.E) and Shisanhang Culture (1,800-500 B.C.E.). (By Worthy Shen and Matthew Mazzetta)