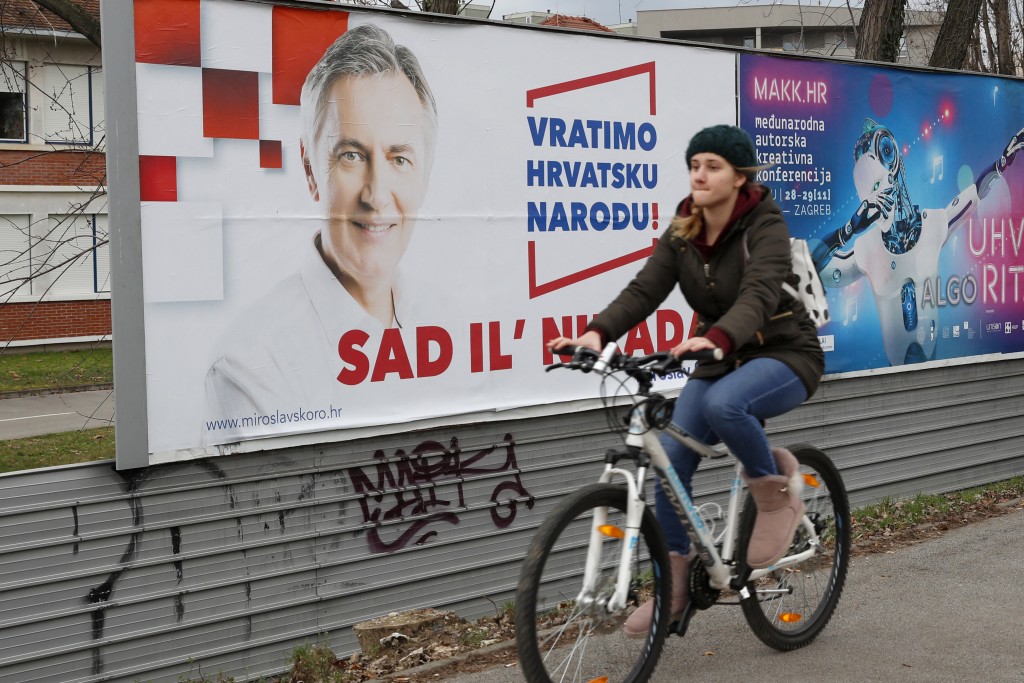 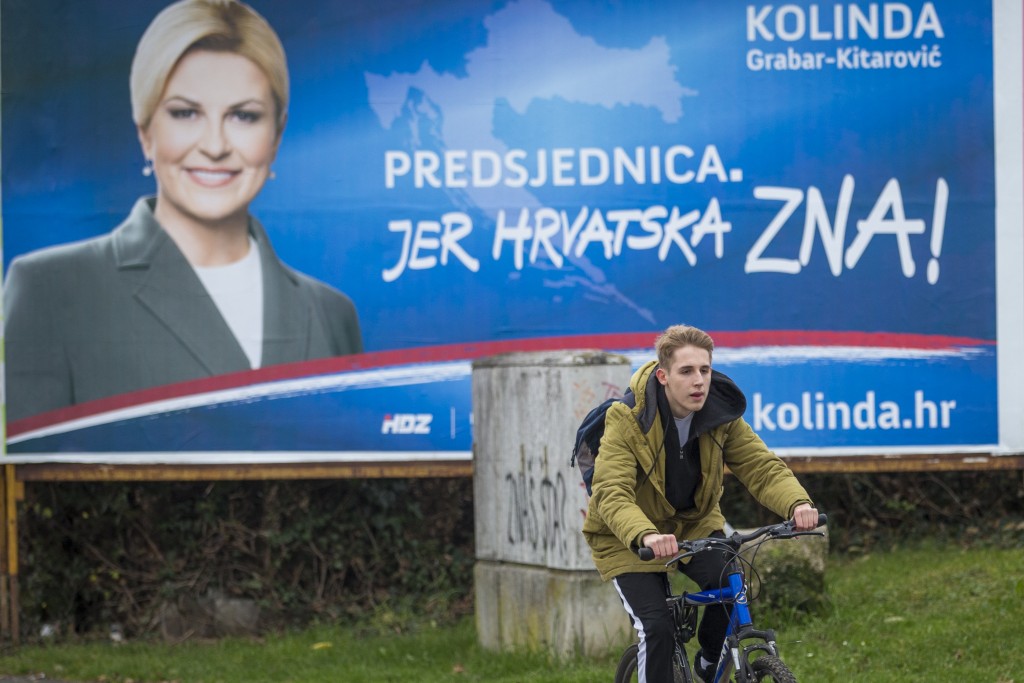 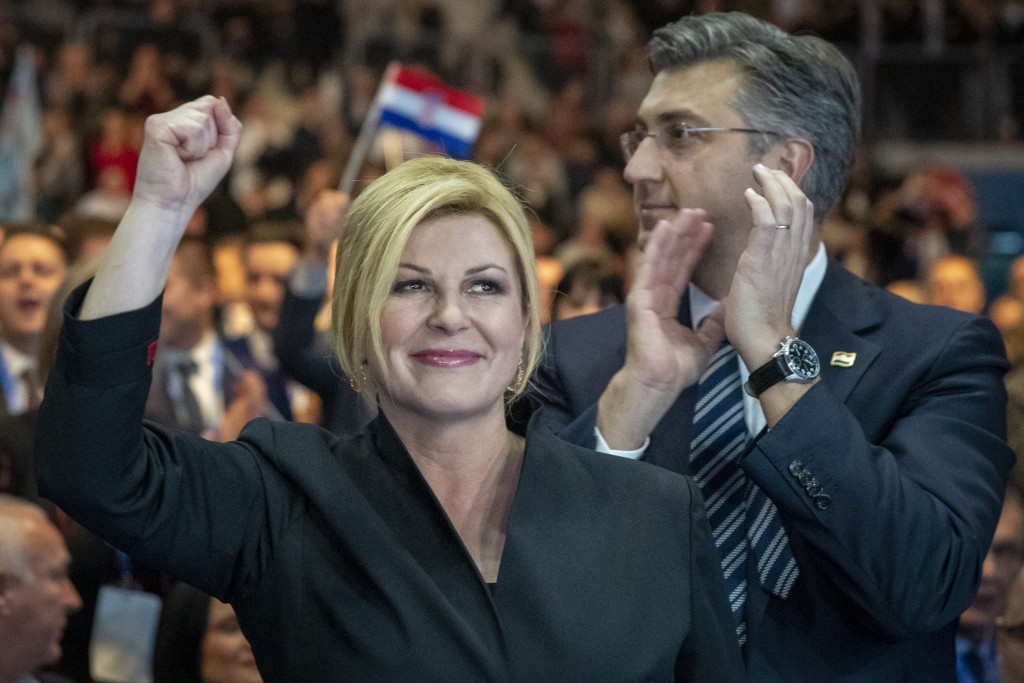 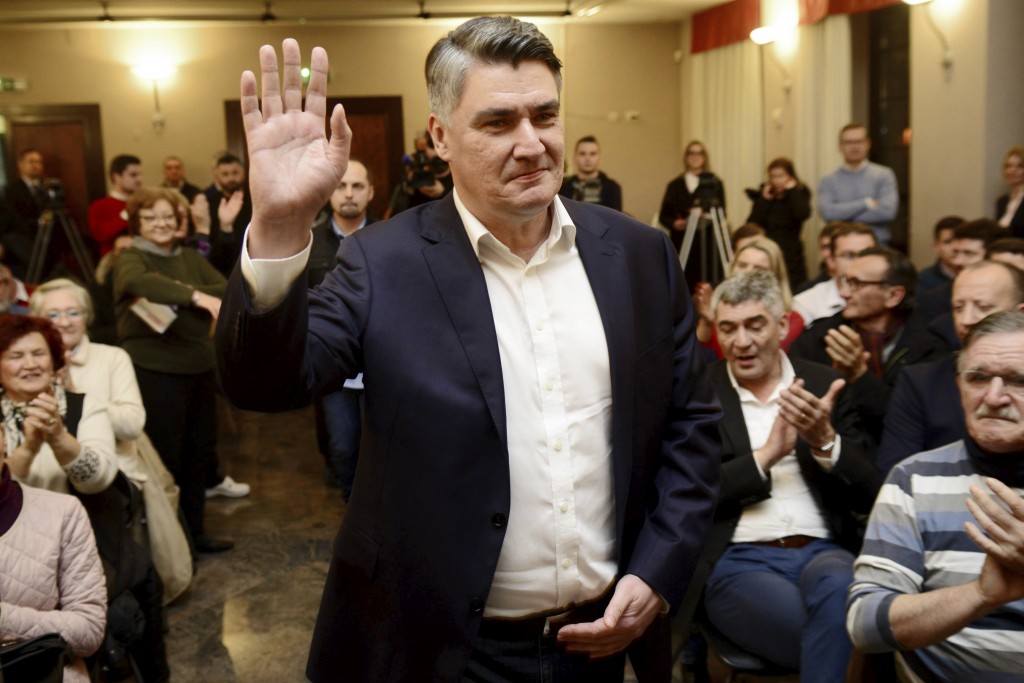 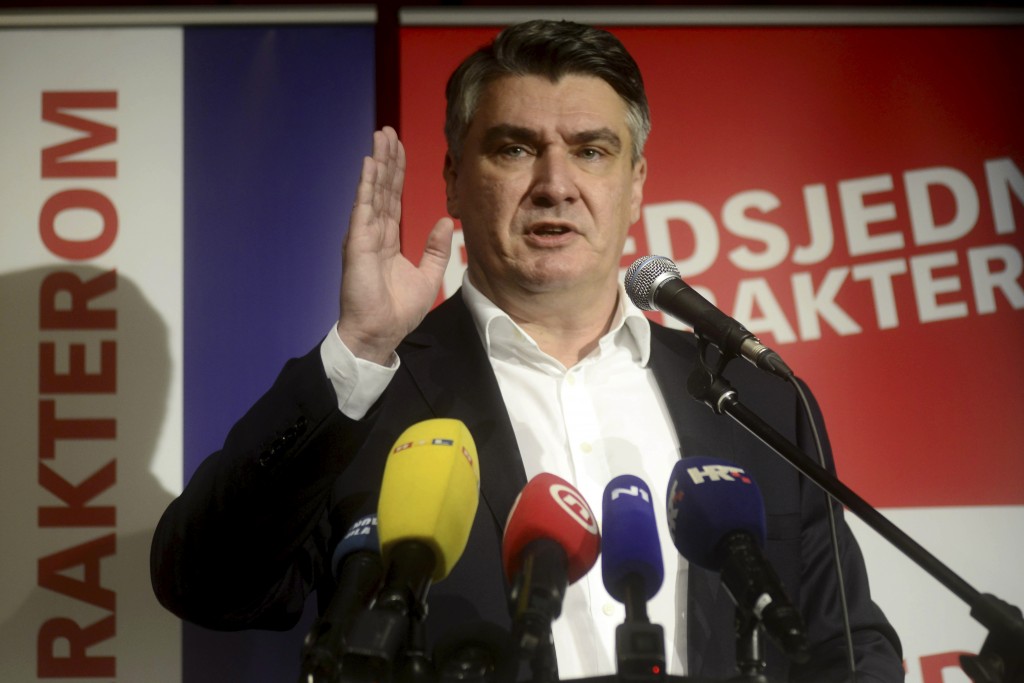 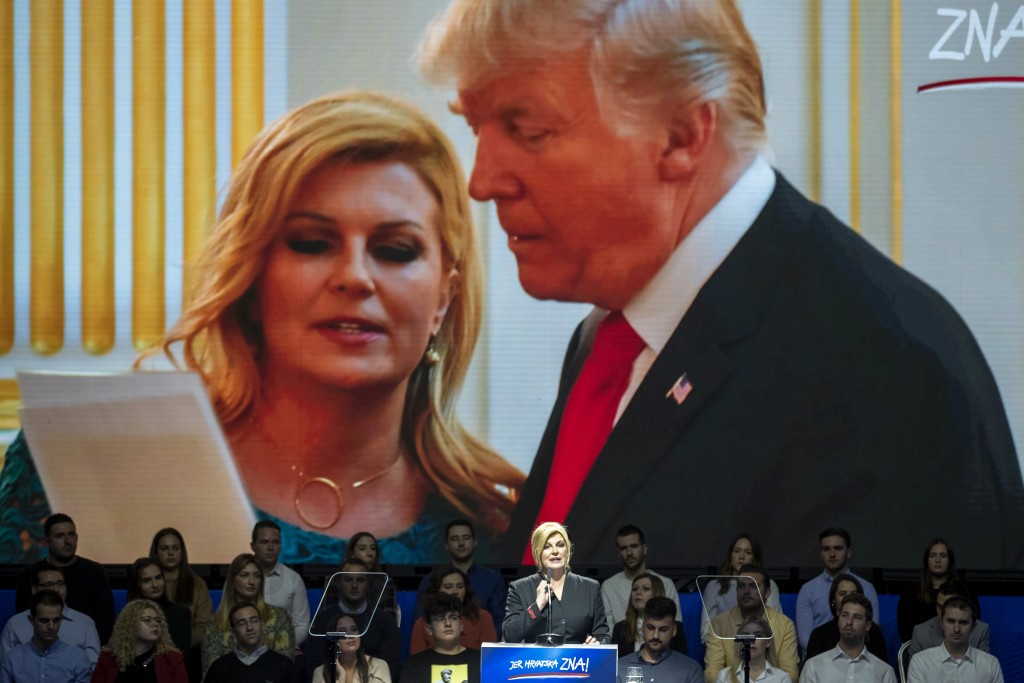 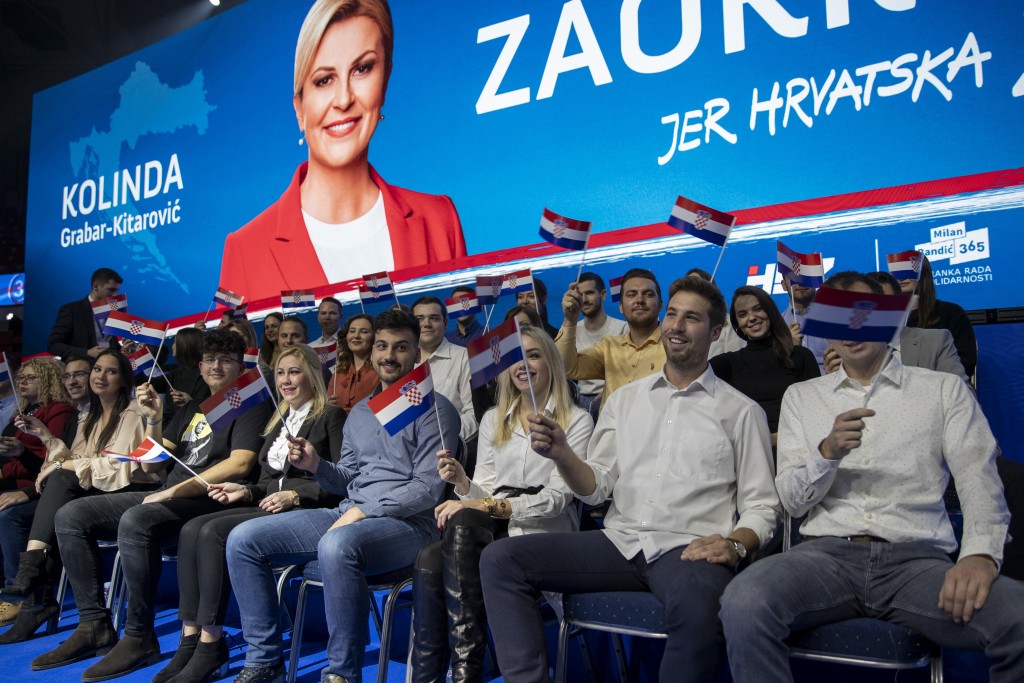 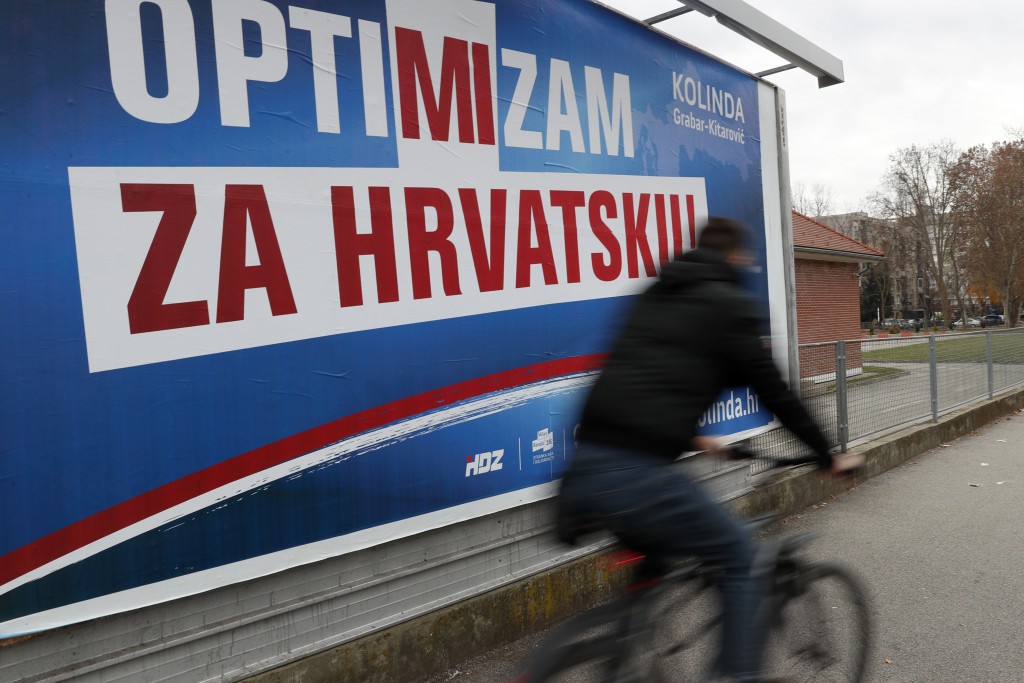 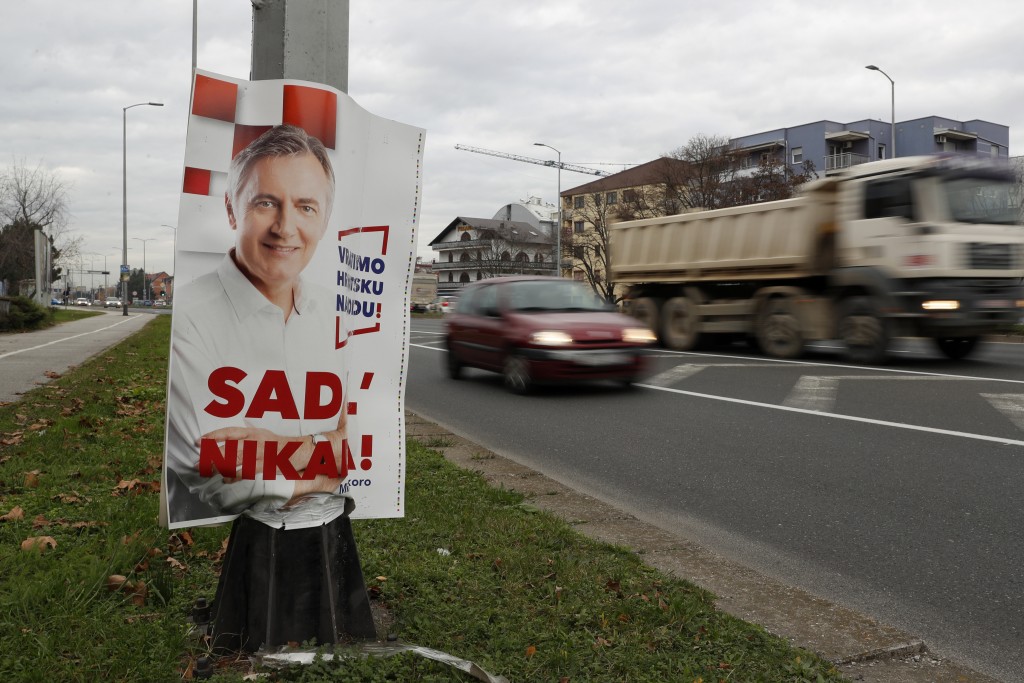 ZAGREB, Croatia (AP) — Croatia is holding a tight presidential election this weekend that is seen as a test for the conservative government only days before the European Union’s newest member state takes over the bloc's presidency for the first time.

The three front-runners are polling close to one another and analysts believe that the victor will be decided in a runoff on Jan. 5 since no single candidate is expected to win outright with a majority of votes.

Keeping the presidency is important for the ruling conservative Croatian Democratic Union party as its government prepares to assume the EU chairmanship that will include presiding over Brexit and the start of post-Brexit negotiations.

Here is a look at both the upcoming presidential ballot and Croatia’s EU presidency:

WHO ARE THE MAIN CANDIDATES?

Grabar-Kitarovic, the incumbent, has been shaken after making an array of gaffes during the campaign.

Croatia's first female president, she is known for flirting with the extreme right while also seeking to portray herself as an easy-going peoples’ president who doesn't shy away from singing in public, for example.

Her main opponent is Milanovic, who is backed by the liberal opposition. Outspoken and populist in style, Milanovic has accused the ruling party of widespread corruption and of turning Croatia toward right-wing nationalism in the past several years.

WHO ELSE IS RUNNING?

Also in the race is nationalist pop-folk singer Skoro, a right-wing candidate who is trailing closely to the two other front-runners.

He is believed to be chipping away the right-wing votes from Grabar Kitarovic. Skoro said he would pardon a convicted war criminal if he wins, fueling nationalism stemming from the 1991-95 war that erupted after Croatia split from the former Yugoslavia.

The remaining candidates include former judge Mislav Kolakusic and several others.

WHAT ARE THE ISSUES?

Deeply divided among the left and right, Croats seem united in focusing on living standards. Although Croatia joined the EU in 2013, it is still lagging more developed nations in the bloc.

The country of 4.2 million people relies heavily on the tourism industry along the popular Adriatic Sea coast. However, rural areas have been emptying on an alarming scale with people leaving for more prosperous EU countries such as Germany or Ireland.

The issue has become one of the most burning problems with more than 15 percent of Croats living and working abroad.

The campaign has been marked by Grabar Kitarovic’s blunders that included promising jobs on an 8,000-euro ($8,900) salary or saying she would bring cakes to the Zagreb mayor in prison if he is jailed for corruption.

Mocked on social networks and in the media, Grabar Kitarovic’s position appeared shaken as the election drew closer.

Milanovic, her leftist challenger, has pledged a “normal” and tolerant Croatia if he wins, while right-wing Skoro wants to send the army to stop the migrant influx — a move that would add to criticism of Croatia’s alleged brutal treatment of people seeking to reach Western Europe.

CAN The ELECTION RESULT AFFECT THE EU PRESIDENCY?

The presidency in Croatia holds no executive power — the president formally commands the army and represents the country abroad — so the outcome of the vote on Sunday doesn't directly change anything.

But if an opposition candidate wins, that could weaken the conservative government as it takes over the important job at the EU. The government recently has faced a massive education strike that also has dented the governing alliance.

WHAT ELSE AWAITS CROATIA DURING THE EU PRESIDENCY?

Croatia will assume the presidency on Jan. 1 for the next six months.

After British Prime Minister Boris Johnson’s Conservatives won the U.K. election, Croatia appears set to preside over Brexit and the start of key negotiations on the future relations of Britain and the EU.

A neighbor to aspiring EU hopefuls in the Western Balkans, Croatia is also expected to help revive the perspective of EU enlargement that was snubbed recently when France blocked the opening of accession talks with North Macedonia and Albania.

Croatia itself is hoping to join soon Europe’s border-free Schengen area and introduce the euro.

Somewhat unusually, the election takes place just three days ahead of Christmas in what is a staunchly Catholic nation.

Government critics say the ruling conservatives picked the date because they count on the votes from Croats living abroad and who are expected to come home for the holidays. Polls open at 0500 GMT and close at 1700 GMT.

Exit polls will be released immediately after polls close and preliminary results an hour or so later. Analysts say it is very unlikely that any of the candidates will win more than half of the ballots that are necessary for an outright victory.