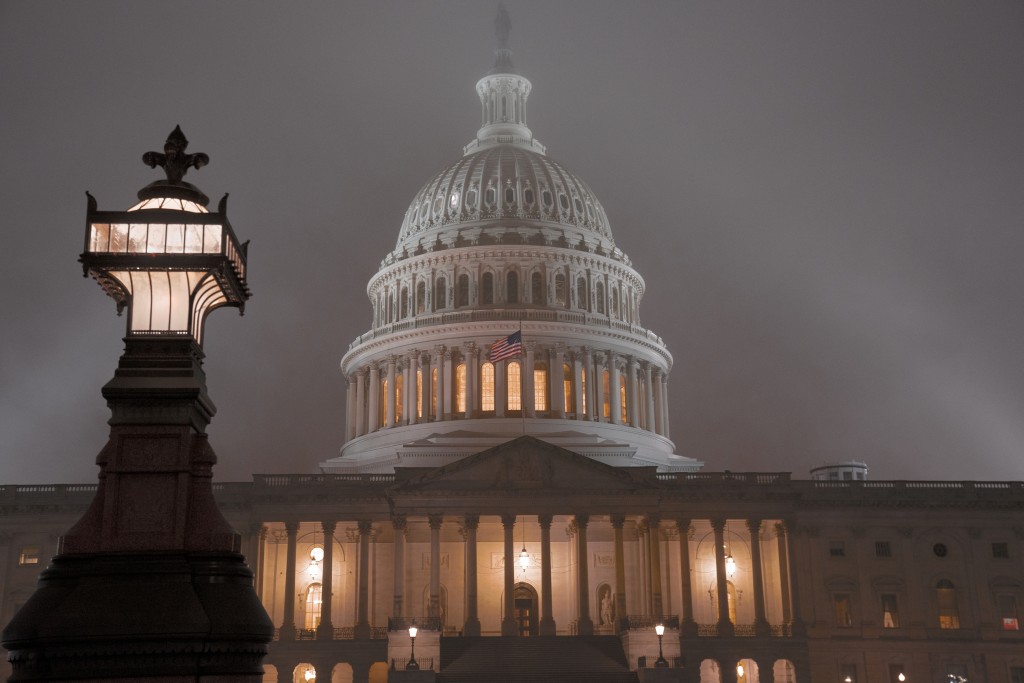 WASHINGTON (AP) — The Senate has voted to advance a $1.4 trillion government spending package in a last, bipartisan burst of legislating before bolting for the holidays from a Capitol that's toxic with impeachment.

The 71-21 procedural vote is a likely prelude to an easy final set of votes later Thursday.

The legislation gives President Donald Trump a victory on his U.S.-Mexico border fence and gives Democrats long-sought domestic spending increases and a repeal of Obama-era taxes on high-cost health insurance plans. It blends spending increases for both sides — reelection fodder for lawmakers throughout the Capitol — with tax and benefit add-ons that will add roughly $400 billion to the deficit over 10 years.

The compromise bill would forestall a government shutdown this weekend, and the White House has announced Trump will sign it before Friday's midnight deadline.

The split-their-differences legislation is towing an unusually large haul of unrelated provisions into law, prompting futile protest from fiscal conservatives. It implements a summertime spending deal that reversed unpopular and unworkable automatic spending cuts to defense and domestic programs — at a $2.2 trillion cost over the coming decade.

“These spending bills are a fiscal dumpster fire,” said Sen. Mike Lee, R-Utah. “This is embarrassing.”

Key provisions include an expensive repeal of Obama-era taxes on high-cost health plans, help for retired coal miners, and an increase from 18 to 21 in the nationwide legal age to buy tobacco products muscled into the measure by Majority Leader Mitch McConnell, R-Ky.

The almost 2,400-page package reflects the reality of divided government and the enduring strength of the Capitol's appropriations process, which allows members to go to bat for their states and congressional districts. McConnell emerged as a victor, winning the politically popular benefit rescue for about 100,000 retired coal miners.

McConnell, Pelosi and key deputies such as the veteran, pragmatic chairs of the Appropriations Committee have wrestled over the spending package for months, finally cutting a deal on Monday that gave Trump a steady stream of funding for his long-sought border wall.

“I would have preferred no funding for the wall,” said top Appropriations Committee Democrat Patrick Leahy of Vermont. “But the Republicans were clear. ... They stood with the president on the wall, as they seem to do time after time.”

The core of the spending bill is formed by the 12 annual agency appropriations bills passed by Congress each year. It fills in the details of a bipartisan framework from July that delivered about $100 billion in agency spending increases over the coming two years instead of automatic spending cuts that would have sharply slashed the Pentagon and domestic agencies.

The increase in the tobacco purchasing age to 21 also applies to e-cigarettes and vaping devices. Aides familiar with the talks said Pelosi agreed to the tobacco legislation — supported by big tobacco interests like Altria — as she also won an arcane carve-out to help unionized carpenters with lower drug costs under their health plans. Her office did not immediately respond to a request for comment.

But anti-smoking activists were irate at the so-called T-21 provision, saying it doesn't go far enough because it failed to ban flavored vaping products popular with teenagers. It also threatens to kill momentum for more stringent anti-vaping legislation backed by House Energy and Commerce Chairman Frank Pallone, D-N.J., who was one of only seven Democrats to oppose the domestic spending half of the two-bill package.

Business groups also praised a seven-year extension of the charter of the Export-Import Bank, which helps finance transactions benefiting U.S. exporters, as well as a renewal of the government's terrorism risk insurance program. The financially troubled government flood insurance program would be extended through September, as would several visa programs for both skilled and seasonal workers.

While Republicans touted defense hikes and Democrats reeled off numerous increases for domestic programs, most of the provisions of the spending bill enjoy bipartisan support, including increases for medical research, combating the opioid epidemic, Head Start and child care grants to states.

“These bills accommodate countless Member priorities on both sides of the aisle,” said GOP Appropriations Committee Chairman Richard Shelby, who won many items for his home state of Alabama.

The outcome in the latest chapter in the long-standing battle over Trump's border wall awards Trump with $1.4 billion for new barriers — equal to last year's appropriation — while preserving Trump's ability to use his budget powers to tap other accounts for several times that amount. That's a blow for liberal opponents of the wall but an acceptable trade-off for pragmatic-minded Democrats who wanted to gain $27 billion in increases for domestic programs and avert the threat of simply funding the government on autopilot.