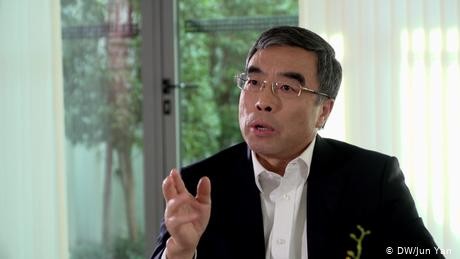 The campus of China's tech giant Huawei in the southern Chinese city of Shenzhen is lined with trees, small ponds and sleek buildings.

Young employees walk around dressed casually in jeans and sneakers. At lunch people take naps on rolled out mattresses. The atmosphere is calm, and one wouldn't guess that Huawei is caught in a global competition for the future of the world's data networks.

Huawei is a global leader in ultra-fast fifth generation (5G) data technology, which is set to power everything from automated cars and factories to smart cities and the "Internet of Things" (IoT). The company is also the world's largest provider of the infrastructure that makes these networks possible.

However, Huawei has been on the defensive since the United States, under President Donald Trump, accused the company of posing a threat to its national security. Washington claims Huawei can be used to facilitate spying by China's Communist Party. And in May 2019, the US barred American companies from doing business with Huawei without a special license.

After Washington's move, Huawei's founder, Ren Zhengfei, said the Chinese company was kind of like a plane that is heavily hit.

In Shenzhen, Huawei's Chairman Liang Hua sat with DW's editor-in-chief, Ines Pohl, to talk about how the firm is grappling with its current challenges.

"I agree with our founder's description of the situation," Liang said. "We were like a plane that kept flying even after being riddled with bullet holes, but it finally made its way back home."

"To land safely, we have to solve many problems and patch up these holes one by one, like redesigning some of our products and ensuring supply continuity," he added.

"Despite all the pressure, our top priority is to ensure survival."

Liang said the company is now focused on expanding in places where it is welcome. "Now that our business presence in the US is virtually non-existent, we can focus our efforts on the countries where our products and services are welcomed."

To make smartphones that work, Huawei still needs software and semiconductors made by US chipmakers like Intel and Qualcomm. Experts say blacklisting Huawei not only affects the Chinese company, but also exposes the US firms to losses.

Moreover, some rural networks in the US still use Huawei hardware. To minimize disruption, the US Commerce Department issued a temporary reprieve from the ban. It allows "limited" export of US-made items to Huawei, and the company to service existing networks in rural areas in the US, which depend on Huawei to run.

This "temporary" reprieve was extended for a third time in November.

There are few global companies that can produce the infrastructure and hardware needed to build 5G networks as cheaply and reliably as Huawei.

According to Berlin-based technology analysis platform IPlytics, Huawei currently owns more 5G patents than any other company worldwide and is also the leader in contributing technical specifications for 5G standards.

Western critics fear the future of 5G technology will likely be determined by Huawei, and controlled by Beijing.

But Liang dismissed such fears. He underlined that Huawei seeks global cooperation to create the tech that will power the high-speed digital future.

"We don't want to close ourselves off for the sake of pursuing independent innovation and self-sufficiency. If we only depend on ourselves, we will not be able to compete in the future global market," said Liang. "At Huawei, we firmly support globalization, especially for our supply chain."

But the US government's actions, the executive said, are forcing Huawei to design and develop many components that go into their products.

"If the US government allows American companies to resume supply to Huawei, we will still buy US components to build our supply chain."

Is Huawei a threat?

US officials worry that Huawei's pioneering role in 5G could be exploited by Chinese authorities for global espionage by demanding access to data or disrupting servers. The fears are compounded by China's development of mass-surveillance technology, system of censorship and tight control over all aspects of public life.

But Liang disagrees. Huawei's networks are trustworthy, he stressed. "Huawei has never received any such requests" to deliver information to the state during our operations over the past years, he said. "And even if we received such requests in the future, we would not agree to them. Without any lawful requests, we won't do anything."

"Huawei only provides equipment, and does not participate in network operations, so we have no access to user data," Liang underlined

Germany is working on a package of laws that will govern the country's future data network. Berlin hasn't excluded Huawei, as long as the company complies with the necessary security and data privacy requirements.

"Chancellor Angela Merkel's decisions on 5G are based on Germany's national interests and development needs for the future," Liang said. "The German government's approach to 5G security standards does not focus on a supplier's country of origin, but treats all suppliers equally. This approach is good for the development of German communications infrastructure."

German network operators like Deutsche Telekom, Vodafone and Telefonica are pursuing a "multi-vendor" strategy for building 5G networks. Only Telefonica has so far publicly named Huawei as a 5G partner.

DW is banned in China, and editor-in-chief Pohl asked: "Wouldn't it be great if people could watch this interview on Huawei mobile phones, for example?" Liang responded: "Yes, that would be great."