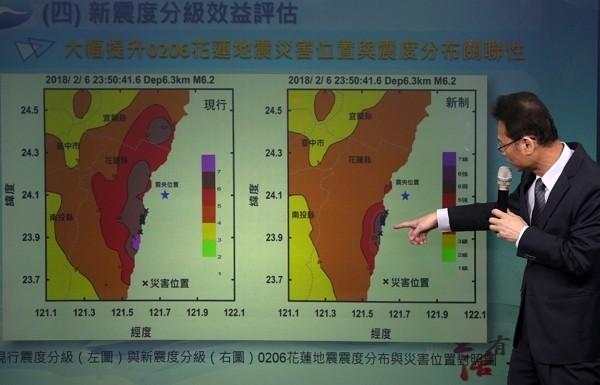 The new earthquake intensity scale has 10 levels compared with only eight in the previous scale, which has been in effect since 2000, Chen Kuo-chang (陳國昌), director of the CWB Seismological Center, said at a press conference.

Intensity measures the amount of shaking at a particular location, and should not be confused with magnitude, which measures the size of an earthquake at its source, according to the U.S. Geological Survey (USGS) website.

The CWB's old intensity scale was computed based solely on peak ground acceleration (PGA) and graded 0-7, with 7 the being the strongest.

In contrast, the new scale is calculated based on a more comprehensive formula that uses peak ground velocity (PGV) beginning at Intensity 5, in which damage to structures is likely to occur.

"We kept Intensity 7 as the highest level in the new scale, so that current laws and regulations will not be greatly affected," Chen explained.

Using the new formula, only 10 (less than 1%) of the 1,370 quakes are considered intensity 5 and above, while quakes with the same intensity numbered 194 (14%) if the old formula is used, he pointed out.

In effect, the new formula filters out quakes which are not really that strong in terms of intensity and more effectively correlates areas with higher potential damage to the intensity scale, thus allowing the government to respond adequately, he explained.

Based on a CWB chart, Intensity 5-moderate quakes are characterized by difficulty in walking and falling bricks from some structures, while during Intensity 5-strong quakes, panic is widespread and weak brick walls can collapse.

In Intensity 6-moderate quakes, people have difficulty standing, weaker houses can collapse, cracks can appear in some roads and there are landslides in mountainous areas; in Intensity 6-strong quakes, stronger houses can be damaged.

In Intensity 7 quakes, people are unable to move at will due to violent ground shaking, stronger houses can collapse and railroad tracks twisted.

Taiwan lies on the Pacific Ring of Fire, where earthquakes occur frequently. In November alone, 22 earthquakes were recorded by the CWB.