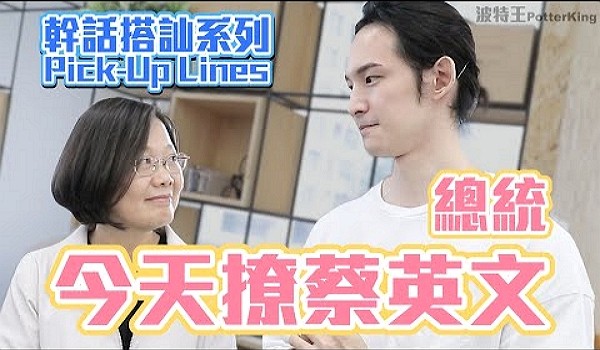 In a video titled "First person in the world to flirt with a president" posted on Saturday (Dec. 14), Potter King and his team welcomed Tsai to their design studio and engaged in humorous conversation. The YouTube personality then proceeded to try out his flirting techniques on Tsai, drawing laughter from both his production team and the president's security detail.

The comical video was well-received by online audiences and has accumulated 3.1 million views in less than two days. However, the channel's production team says it has received warnings from its Chinese promoter, Papitube, asking that it delete the video, reported CNA.

Since Chinese citizens do not have access to YouTube videos, Papitube has facilitated communication between Potter King and celebrities in China. It has also helped manage the Taiwanese channel's Sina Weibo account.

The Kaohsiung-based creative team said that Papitube threatened to terminate their contract and demanded that the channel never refer to Taiwan as a country or Tsai as president. After a brief discussion with his team, Potter King informed Papitube that Tsai is indeed the president of Taiwan and that he would rather lose profits than kneel before the Chinese Communist Party, according to Liberty Times.

Presidential Office Spokesperson Ting Yun-kung (丁允恭) told the media that Tsai would reach out to Potter King for more details but that Taiwanese citizens should be able to call their leader "president." Many Taiwanese netizens have voiced their support on Potter King's Facebook page and praised the team's courage to defend Taiwan's democracy.

At a press conference Monday (Dec. 16) morning, Tsai expressed her disappointment towards Papitube's response and said that She did not intend to bring politics into the video. She stressed that Taiwan is a free country and a free space for artists to create.