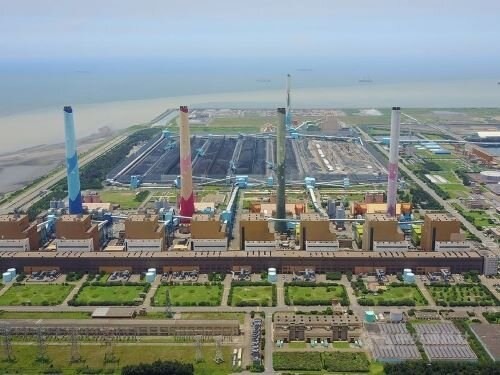 
The Taichung Power Plant has been slapped with another hefty fine totaling NT$6 million (US$198,445) after it failed to cease the use of raw coal for power generation, the city government said Saturday.

The fossil fuel power plant, one of the largest of its kind in the world, was fined NT$3 million by the city government on Nov. 3 for exceeding the maximum coal use permitted for the year, with a warning that it must "make improvements" within 10 days or face further consequences.

According to the city government, the plant had consumed 11.13 million tonnes of coal as of Nov. 30, exceeding the annual limit of 11.04 million tonnes, and is continuing to so despite earlier warnings to cease coal consumption.

The facility, which is operated by state-run Taiwan Power Co. (Taipower), has until Dec. 23 to make improvements or face further punishments from the city government, it explained.

There are currently 10 coal-fired generators each producing 550 megawatts of capacity at the Taichung plant. The site also has four gas turbines which add another 280 MW additional capacity toits power generation.

On Saturday, Taipower said the NT$6 million fine was unreasonable and unlawful, noting that it will seek administrative relief if the city government continues to impose fines.

The company said it did not exceed the legal limit, as a permit issued by the city government in 2017 allowed the plant to burn up to 16 million tonnes of coal a year and reduced its consumption by 3 million tonnes in 2019.

Under the terms of that permit, which was issued by former Taichung Mayor Lin Chia-lung (林佳龍) of the Democratic Progressive Party (DPP), the plant's coal consumption was limited to 13 million tonnes for 2019.

However, after Lu Shiow-yen (盧秀燕) of the opposition Kuomintang was elected mayor in 2018, a new consumption limit of 11.04 million tonnes was set, amid public anger that the plant is the main source of air pollution in the city.

The new annual limit was decided by the city government on Sept. 20 this year, and a notice of the change sent to the power plant one month later.

However, in a press release Taipower criticized the abrupt change,saying the city government had given it insufficient time to make the necessary adjustments to operations.

Meanwhile, the company said it is doing everything possible to meet the expectations of local residents by helping improve the city's air quality through the reduction of coal burning, but the maintenance of a stable electricity supply is also an important consideration. (By Su Mu-chun, Liu Pei-chen and Ko Lin)