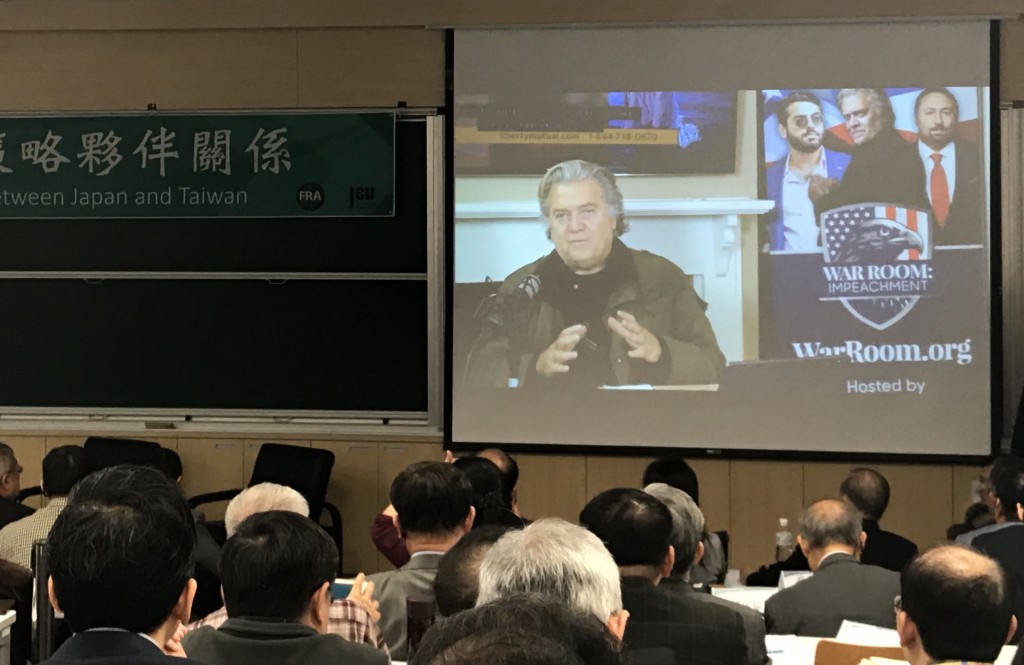 Sitting in the “WarRoom,” which he described as “an action center” where he produces a daily program defending Trump against impeachment, Bannon was invited to deliver a speech at a forum held in Taipei on Saturday morning. The forum was co-hosted by the Taiwan-based Formosan Republic Association and Japanese Conservative Union.

Bannon criticized Beijing’s geopolitical ambitions and called them “a threat to the entire world.” He said China aspired to become a global hegemony with its “One Belt, One Road” and “Made in China 2025” initiatives, by rolling out a global 5G infrastructure, and through its influence operations against Taiwan, the U.S., and other democracies.

Describing Taiwan’s presidential election as a world historical event, Bannon said polling would represent the “freedom and independence of Taiwan and its people.” The Chinese government had argued for decades that Chinese-speaking people were incapable of governing themselves, but the people of Taiwan and Hong Kong showed they were totally wrong, he added.

Bannon went on to slam the Chinese authorities’ oppression of the Dalai Lama, the Uighur community in Xinjiang, and Christian and other religious groups in China. “They [Beijing] run like gangsters, operate like gangsters, and treat their people like what gangsters do.”

Serving as the White House chief strategist during the first seven months of the Trump administration, Bannon said U.S.’s freedom was interlinked with the freedom of the people of Taiwan and Hong Kong. He added that he looked forward to visiting Taiwan after the “great victory” of Tsai and vice presidential candidate William Lai (賴清德) in January 2020.