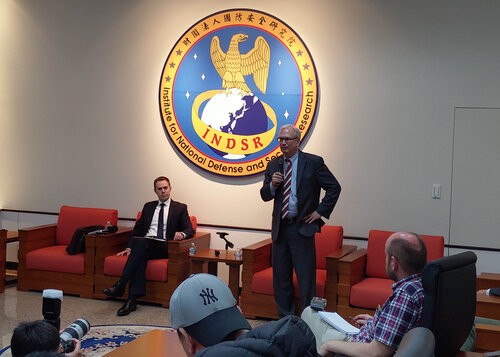 TAIPEI (Taiwan News) — A U.S. analyst visiting Taipei has raised the alarm on cross-strait relations, adding that Beijing is likely to ramp up pressure on Taiwan no matter who wins the presidential race in January.

“The outlook is pretty negative regardless of what political party is in power,” said Michael Mazza, a visiting fellow at the American Enterprise Institute, at a press conference hosted by the Taipei-based Institute for National Defense and Security Research (INDSR) on Tuesday (Dec. 10).

Mazza noted that if President Tsai Ing-wen (蔡英文) won reelection, Taiwan’s relationship with Beijing would only get worse in the short term, as China’s leader Xi Jinping seems unlikely to shift his approach over the last three years to a more conciliatory one. More efforts to “squeeze the island” could be anticipated, Mazza said, referring to Chinese military pressure, attempts to poach Taiwanese allies, and initiatives to strain the bilateral economic relationship.

Despite the dim prospects for cross-strait ties, Mark Stokes, executive director of the Project 2049 Institute, predicted that Beijing would not take military action against Taiwan, as the cost of manpower and economic loss, as well as potential risks to stability in China, would be high. Mazza, on the other hand, expressed concern that Xi might take more forceful measures since the Chinese leader has been facing greater internal problems in recent years.

The two scholars are currently conducting research on China’s campaign for influence, according to the INDSR. Mazza’s previous report for the Global Taiwan Institute focused on Chinese operations aimed at influencing Taiwan’s November 2018 elections, in which the ruling Democratic Progressive Party (DPP) suffered a landslide defeat to the pro-China Kuomintang, losing even the mayoral election in the traditional DPP stronghold of Kaohsiung.

According to the findings, China might have resorted to disinformation and fake news schemes to influence Taiwan’s elections. In the meantime, “old school” tactics were likely employed, including donations made to preferred candidates through Taiwanese businessmen with interests in China and betting strategies favoring certain candidates in underground gambling rings, as a way of affecting voting patterns.

Nevertheless, Mazza acknowledged it was hard to conclude how effective these Chinese efforts were. “Chinese political warfare is just one of many factors that could determine the electoral outcomes,” he added.

Even if Tsai, whom Beijing opposes due to her refusal to adopt the 1992 Consensus, which expresses the idea that Taiwan and China belong to one country, won in January, it would not mean that Chinese operations had not swayed voters, Mazza said. The election could also be influenced by other factors, such as Han Kuo-yu’s (韓國瑜) ability to gain support, the performance of Taiwan’s economy, and the nation’s relationship with the U.S., he added.

Stokes said that despite a lack of concrete evidence, he believed Beijing has attempted to affect the results of presidential elections in Taiwan since the island’s first in 1996. He argued that since the ultimate goal of Beijing would be to bring Taiwan under its control and implement the “one country, two systems” framework on the island, it could have an interest in meddling with the electoral process.

Speaking on whether the Trump administration or future U.S. governments would treat Taiwan as a bargaining chip in order to enter into negotiations with China, both scholars dismissed such a hypothesis. Even though Trump has hardly discussed his personal opinion about the U.S.-Taiwan ties, he has made the “right decisions” over the past three years, Mazza asserted.

Trump has approved major arms sales to Taiwan and signed legislation in favor of the two countries’ bilateral relationship, both of which have angered Beijing, noted Mazza, adding that strong bipartisan support for Taiwan on Capitol Hill could also limit the Trump administration’s attempts, if there be any, to trade Taiwan away.

Meanwhile, Stokes said the U.S. recognized Taiwan’s values and would therefore not view the island as a bargaining chip. He added that the U.S. government should adhere to the Taiwan Relations Act, which has been in place since 1979, when it comes to changing its policy toward the country.